U.S. and Chinese officials held trade talks on Wednesday in China.  News reports noted that increased purchases of U.S. agricultural products were discussed, although no significant breakthroughs were announced at the conclusion of the meeting.  Additional talks are scheduled to take place in September.  Meanwhile, recent trade data shows that big agricultural purchases by China remain elusive; and on Thursday, President Trump announced additional tariffs on Chinese imports.

The Times article explained that, “Chinese officials welcomed the American delegation with a dinner on Tuesday at the Fairmont Peace Hotel on Shanghai’s famous Bund promenade.

“But around the same time in Washington, President Trump accused China of failing to follow through on its promises, adding that a deal was unlikely to be reached before the 2020 United States presidential election.

He also complained that China had not started to buy American agricultural goods as he said was promised after he met with Mr. Xi in Japan. Chinese officials have disputed that they agreed to the purchases.

China is doing very badly, worst year in 27 – was supposed to start buying our agricultural product now – no signs that they are doing so. That is the problem with China, they just don’t come through. Our Economy has become MUCH larger than the Chinese Economy is last 3 years….

..My team is negotiating with them now, but they always change the deal in the end to their benefit. They should probably wait out our Election to see if we get one of the Democrat stiffs like Sleepy Joe. Then they could make a GREAT deal, like in past 30 years, and continue

Ms. Stevenson pointed out that, “CCTV reported on Wednesday that trade negotiators had discussed how China would increase its purchases of American agricultural goods as well as how the United States would ‘create favorable conditions for procurement’ of technology.”

Based on what I know, Chinese and US negotiators had an efficient and constructive deep exchange on Wednesday. The two sides discussed increasing purchase of US farm products and the US side agreed to create favorable conditions for it. They will hold future talks.
3:28 AM – Jul 31, 2019

The Times article added that, “The White House statement said that the two sides had discussed topics including ‘forced technology transfer, intellectual property rights, services, non-tariff barriers and agriculture‘ and that the Chinese side had confirmed its commitment to increase purchases of American agricultural exports.”

Earlier this week, Bloomberg writers Michael Hirtzer and Dominic Carey reported that,  “During an initial cooling of the trade-war rhetoric earlier this year, Chinese buyers made a few goodwill purchases of American beans. But sales slowed to a near halt after talks broke down in May, and have yet to pick up significantly now that negotiators from Washington and Beijing are meeting in person in Shanghai.” 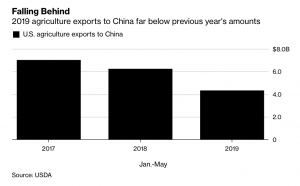 The Bloomberg article stated that, “Through May, the value of all U.S. agriculture exports to China including products such as cotton and pork fell to $4.3 billion from $6.2 billion in the same year-ago period, U.S. government data show.

“While any purchases in recent weeks are yet to show up in the trade data, 2019 is falling behind 2018, a year many farmers and investors were hoping was an outlier.

And Reuters writer Karl Plume reported earlier this week that, “U.S. government data on Monday showed exports of soybeans to China picking up to the most in five months last week ahead of trade talks between the two countries in Shanghai, although the shipments were for beans bought months ago and new purchases have proven elusive.

Mr. Plume noted that, “A small amount of U.S. pork has been sold. But the USDA has not confirmed any new soy purchases by China since the G20, even after China last week offered five companies a chance to buy limited amounts of U.S. soy tariff-free. USDA rules require exporters to report any grain sales of more than 100,000 tonnes to a single destination within 24 hours.

China bought about 14.3 million tonnes of U.S. soybeans in the 2018/19 season which began last September, the least in 11 years, and more than 4 million tonnes of those purchases have yet to be shipped, USDA data showed.

“China has shipped 1.62 million tonnes of previously purchased U.S. soybeans since the Osaka meeting, less than the several millions tonnes state media said had been shipped on Sunday,” the Reuters article said.

And on Thursday, Reuters writers Mark Weinraub and Karl Plume reported that, “The U.S. Department of Agriculture on Thursday confirmed a private Chinese company bought 68,000 tonnes of soybeans in the week ended July 25, the first soybean purchase since Beijing offered to exempt five crushers from import tariffs imposed more than a year ago as part of a U.S.-China trade dispute.”

Also this week, Bloomberg writer Tatiana Freitas reported that, “Brazilian farmers will likely spend more money on soybean farming in the coming season as the U.S.-China trade war continues to leave room for the South American powerhouse to increase its grip on the title of world’s biggest exporter of the oilseed.

“Crop-nutrient giants Mosaic Co. and Yara International ASA expect fertilizer deliveries to Brazilian producers will reach a record. Planting in the country starts in September and most of the sales for the coming season have already been made, underscoring the confidence in the forecasts.” 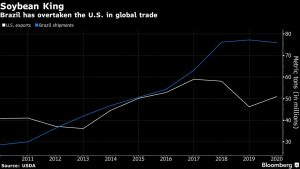 The article added that, “Brazil has benefited from China’s yearlong trade dispute with the U.S., the second-biggest soybean exporter. A spring deluge that threatened crops in the U.S. Midwest gave the South American country an added advantage.”

Wall Street Journal writers Vivian Salama and William Mauldin reported on Thursday that, “President Trump moved Thursday to extend tariffs to essentially all Chinese imports, escalating a trade conflict that is poised to hit U.S. consumers in the pocketbook and roiling financial markets.

“The new tariffs would take effect Sept. 1 and cover $300 billion in Chinese goods—including smartphones, apparel, toys and other consumer products. They would come on top of tariffs already imposed on $250 billion in imports from China.

“‘If they don’t want to trade with us anymore, that would be fine with me,’ Mr. Trump said at the White House.”

Our representatives have just returned from China where they had constructive talks having to do with a future Trade Deal. We thought we had a deal with China three months ago, but sadly, China decided to re-negotiate the deal prior to signing. More recently, China agreed to…

…buy agricultural product from the U.S. in large quantities, but did not do so. Additionally, my friend President Xi said that he would stop the sale of Fentanyl to the United States – this never happened, and many Americans continue to die! Trade talks are continuing, and…

…during the talks the U.S. will start, on September 1st, putting a small additional Tariff of 10% on the remaining 300 Billion Dollars of goods and products coming from China into our Country. This does not include the 250 Billion Dollars already Tariffed at 25%…

…We look forward to continuing our positive dialogue with China on a comprehensive Trade Deal, and feel that the future between our two countries will be a very bright one!

The Journal writers noted that, “Mr. Trump made public his plans to impose tariffs in a series of tweets that followed a briefing from his trade team on this week’s negotiations in Shanghai. Those talks ended with neither side detailing significant progress toward resolving the more-than-yearlong dispute.”

“The Wall Street Journal reported this week that the slow progress in trade talks was partly the result of a new tactic from Beijing, which increasingly thinks waiting may produce a more favorable agreement,” the article said.

Bloomberg News reported on Thursday that, “Beijing pledged to respond if the U.S. insists on adding extra tariffs to the remainder of Chinese imports, as President Donald Trump’s abrupt escalation of the trade war between the world’s two largest economies sent stocks tumbling from Asia to Europe.”

The article indicated that, “‘If the U.S. is going to implement the additional tariffs, China will have to take necessary countermeasures,’ Foreign Ministry spokeswoman Hua Chunying said at a regular briefing in Beijing on Friday. She didn’t elaborate on what the measures would be.

“‘China won’t accept any maximum pressure, threat, or blackmailing, and won’t compromise at all on major principle matters,’ Hua said.”

“Trump has repeatedly complained that China hasn’t made the ‘large quantities‘ of agricultural purchases that he claims Xi promised when then they met in Osaka, but what was actually promised has never been made public and the two sides’ interpretations appear to differ,” the Bloomberg article said.