On Friday, Bloomberg writers Joshua Gallu and Millie Munshi reported that, “President Donald Trump said he has asked China to immediately remove all tariffs on U.S. agriculture, including beef and pork, citing progress in trade talks between the two nations.”

I have asked China to immediately remove all Tariffs on our agricultural products (including beef, pork, etc.) based on the fact that we are moving along nicely with Trade discussions….

….and I did not increase their second traunch of Tariffs to 25% on March 1st. This is very important for our great farmers – and me!

The Bloomberg article stated that, “In making the demand, Trump noted in a tweet Friday that he refrained from increasing U.S. tariffs on Chinese goods to 25 percent from 10 percent on March 1, as he said he would in the absence of progress toward an agreement. Faxes and phone calls to China’s ministries of commerce and foreign affairs, and the office in charge of trade talks, went unanswered Saturday outside office hours.”

If a deal is made with China, our great American Farmers will be treated better than they have ever been treated before!

Gallu and Munshi pointed out that, “It’s unclear what effect Trump’s demand could have on ongoing talks, which the president signaled earlier this week were moving toward an agreement. American officials are preparing a final trade deal that Trump and China’s President Xi Jinping could sign within weeks, people familiar with the matter have said, even as a debate continues in Washington over whether to push the Beijing government for more concessions.”

Reuters writer David Alexander reported Friday that, “U.S. Agriculture Secretary Sonny Perdue said this week that U.S. trade negotiators had asked China to reduce tariffs on U.S. ethanol, but it was not immediately clear whether Beijing was willing to oblige.

Financial Times writer James Politi reported Friday that, “The president’s tweet suggests that he is extremely sensitive to the reaction of the US farm sector to any deal he strikes with Beijing. Mr Trump and Robert Lighthizer, his chief trade negotiator, are already under heavy pressure not to settle for weak concessions from China on key structural issues, such as US requests that Beijing slash industrial subsidies, rein in state-owned enterprises, and stop the forced transfer of technology.”

At the @WaysandMeansGOP hearing with the @USTradeRep, I discussed the importance of getting an enforceable trade agreement with China that ensures our corn, soybean, and pork producers in Illinois have open markets to sell their products. Watch below

Meanwhile, Bloomberg writers Millie Munshi and Isis Almeida reported Friday that, “Donald Trump is asking China to end its tariffs on American agriculture, news that should seemingly send a jolt through crop markets. But instead, traders are casting a skeptical eye.”

The Bloomberg article added that, “‘The markets are a little tired of some of the ups and downs and the eight or 12-hour news cycle of tweets,’ Greg Grow, the director of agribusiness at Archer Financial Services in Chicago, said in a telephone interview Friday.

‘The market needs to see some confirmation of a deal getting done. If this is a confirmation, and we start to see agreements that are signed, we’ll see a positive reaction for prices.’

“While Chinese buyers returned to the market Friday asking for offers, traders familiar with the process say no deals have been done. That’s a disappointment for American farmers looking to offload a bumper harvest that’s been piled in bags and silos due to President Donald Trump’s trade war with China.” 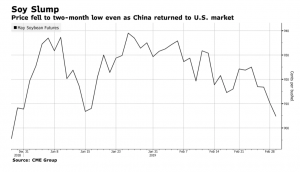 “China Looks to Buy U.S. Soybeans But No Deals Are Being Done,” by Isis Almeida and Shruti Singh. Bloomberg News (March 1, 2019).

And Reuters writer Naveen Thukral reported last week that, “China’s purchases of U.S. soybeans beyond 10 million tonnes that Washington says Beijing has committed to buy could be limited as a freshly-harvested Brazilian crop hits the market, a leading U.S.-based agriculture broker said on Thursday.

“‘Given the market logistics in China and the size of the Brazilian crop, sales of U.S. old-crop beyond the second tranche of 10 million tonnes, which Beijing has apparently committed to, looks unlikely,’ McPike told Reuters on the sidelines of a grains conference in Singapore.”

In what could be a further complication regarding the logistics of U.S. soybean exports, Reuters writers Julie Ingwersen and Karl Plume reported on Friday that,

Flooding and ice buildup on key rivers in the U.S. Midwest has stalled the movement of barges that supply export terminals at the Gulf of Mexico with grain and soy, barge and grain traders said.

Ingwersen and Plume explained that, “The transport problems come as the United States and China, the world’s biggest soy importer, are trying to hammer out a trade deal after months of tariffs on billions of dollars worth of each others’ goods.

“Any resolution could result in China buying more U.S. agricultural products after being mostly out of the market this year.

“But high water levels could complicate any effort to ship goods quickly from the U.S. Gulf.”

Lastly today, Adam Belz reported on the front page of the business section in Sunday’s Minneapolis Star Tribune that, “Since the trade war put a stop to U.S. soybean sales to China last year, farmers have been optimistic that things will go back to normal eventually. But now they are getting more worried.”

Sunday’s article added: “And with soybeans now stockpiled in the U.S., a quick resolution of a trade deal now being negotiated between the U.S. and China won’t immediately help farmers.

“‘Even if the tariffs were lifted tomorrow, it will take time to work through the stocks of soybeans on American farms currently and then plan for a new crop of soybeans that will be planted in the not-too-distant future,’ said [John Griffith, a senior vice president at CHS Inc.], who leads CHS’s global grain business.

“Wallace Tyner, an agricultural economist at Purdue University, said if the trade war drags out for another two years, ‘We could permanently lose soybean markets to Brazil and other exporters.’”