Progress on Phase One Trade Deal with China, Questions on Ag Purchases Remain

Reuters writer Dominique Patton reported last week that, “China is still a long way from forking out $50 billion for farm goods from the United States, agriculture industry analysts said on [Oct. 14th], cautioning that getting there is contingent on removing substantial technical and political hurdles.”

“‘I think it’s a meaningless big number, thrown out to get headlines, and won’t happen,’ Friedrichs told Reuters.” 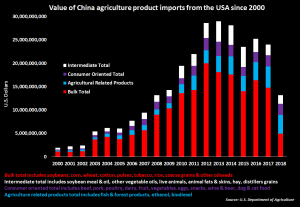 Ms. Patton pointed out that, “Soybeans made up more than half of China’s agriculture purchases from the United States in 2017, at about $13 billion. Bringing in significantly larger amounts of the oilseed will be difficult with African swine fever curbing soymeal demand in China, said [Ole Houe, director of advisory services at brokerage IKON Commodities in Sydney].”

China has the market demand to buy $40 billion-$50 billion worth of US farm products. China won’t make a commitment that it can’t honor; once it promises, it will fulfill it.

More broadly, Bloomberg News reported last week that, “China wants to hold more talks this month to hammer out the details of the ‘phase one‘ trade deal touted by Donald Trump before Xi Jinping agrees to sign it, according to people familiar with the matter.

“Beijing may send a delegation led by Vice Premier Liu He, China’s top negotiator, to finalize a written deal that could be signed by the presidents at the Asia-Pacific Economic Cooperation summit next month in Chile, one of the people said. Another person said China also wants Trump to scrap a planned tariff hike in December in addition to the hike scheduled for this week, something the administration hasn’t yet endorsed. The people asked not to be named discussing the private negotiations.”

The U.S. and China have emerged from last week’s talks with different takes on what’s in the accord and how close they are to signing a document.

“Trump said ‘we’ve come to a deal, pretty much, subject to getting it written’ and indicated it might take several more weeks of negotiation. China’s Ministry of Commerce merely said that ‘the two sides have made substantial progress’ and ‘agreed to work together in the direction of a final agreement.’ The state-run Xinhua news agency didn’t mention a deal either.”

Sen @ChuckGrassley praises ag trade deal with China, then goes into long list of things it fails to do, doesn’t trust China, says he’s skeptical, but says if China wasn’t going to buy $50 billion in ag products then China would have said that with @realDonaldTrump last week.

And a separate Bloomberg article last week reported that, “Beijing wants a rollback in tariffs in its trade war with the U.S. before China can feasibly agree to buy as much as $50 billion of American agriculture products that President Donald Trump claims are part of an initial deal, people familiar with the matter said.

“Chinese officials are willing to start purchasing more U.S. agricultural products as part of the ‘phase one’ trade deal, but it is not likely to reach the $40 billion to $50 billion touted by Trump under current circumstances, the people said, asking not to be identified discussing the private negotiations.

“China’s tit-for-tat tariffs on American agricultural products make it more expensive for its firms to import the goods. Beijing would have to lift those levies to make it easier to buy as much as $50 billion of goods, but would only do so if the U.S. reciprocates and lifts its tariffs on Chinese goods, the people said.”

The article stated that, “The condition highlights how far apart Washington and Beijing remain, even after reaching the handshake accord touted by the U.S. last week.”

Nonetheless, Bloomberg writers Michael Hirtzer and Kevin Varley reported last week that, “Even as traders await details on the partial U.S.-China trade accord, government data shows American soybean shipments to the Asian country already were recovering from the lows of the more than yearlong feud.

In the year through Oct. 10, U.S. soybean shipments to China were up 23% from the same period in 2018, Department of Agriculture data show. 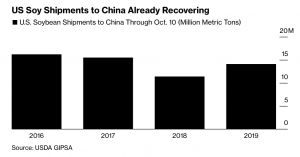 Meanwhile, Wall Street Journal writers Chao Deng and Lingling Wei reported on Wednesday that, “China has promised to buy more U.S. farm products, but questions remain over how much, the time frame for purchases, and what the U.S. might have to give in return.

“Beijing is pushing the U.S. to drop plans to impose new 15% tariffs on $156 billion in consumer goods starting Dec. 15 and could use the farm purchases as leverage.

“Chinese negotiators continue to say purchases must be based on actual demand and at fair-market prices, according to people briefed by the matter. The roughly $50 billion in farm products touted by President Trump is far beyond what China has historically spent in any one year and would likely require Beijing to lean heavily on its state-owned firms to accomplish.” 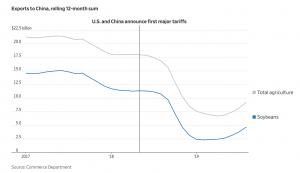 The Journal writers pointed out that, “U.S. exports of soybeans, sorghum, pork and other agricultural products to China peaked in 2013 at around $29 billion, falling to $24 billion in 2017 before the trade war started. Those exports plunged to $9.2 billion over the past 12 months, according to Commerce Department data.” 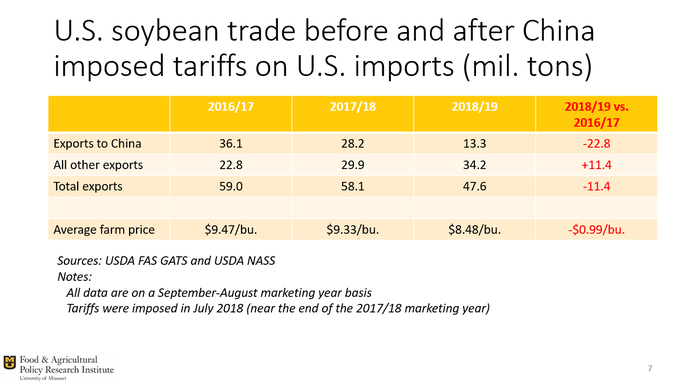 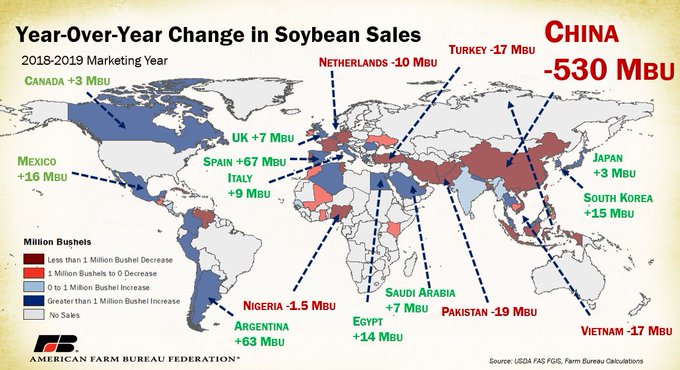 The Journal article added that, “China has already ramped up purchases of U.S. farm goods in recent weeks and is willing to increase soybean purchases to 30 million tons this year, according to people briefed on the talks. It has bought 20 million tons of soybeans from U.S. producers so far this year, according to the Chinese Foreign Ministry on Tuesday, figures roughly consistent with U.S. data.

“Beijing has incentives to import more pork to keep pace with domestic demand and keep inflation at bay. African swine fever has decimated the Chinese pig population, sending pork prices up 69% in September compared with a year earlier.”

Our farmers need dependable trade policies and open markets. I met with Ambassador Doud from @USTradeRep to press him on the Administration’s plans to expand Asian markets for our farmers. 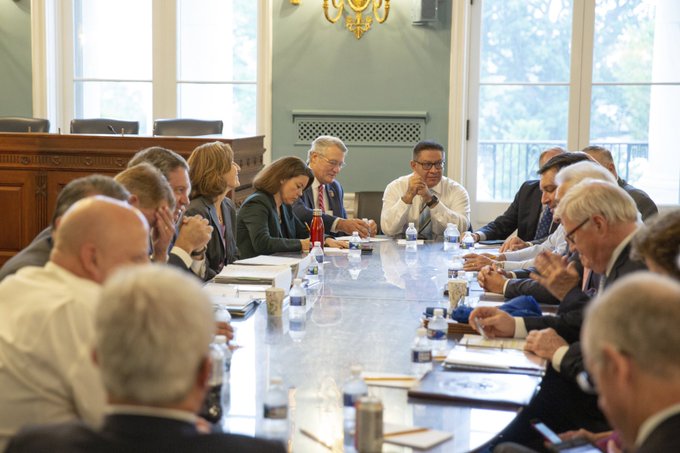 On Thursday, Bloomberg News reported that, “Chinese officials are working on the text of an agreement on trade in close contact with U.S. negotiators, and have begun discussions on the next stage, Ministry of Commerce spokesman Gao Feng said at a regular briefing in Beijing Thursday.”

Also on Thursday, Wall Street Journal writers Liyan Qi and Grace Zhu reported that, “China’s Ministry of Commerce confirmed that the nation would step up purchases of U.S. agricultural products as the two sides are working on the text of an initial agreement, but it stopped short of giving details on how much it would buy.

‘Under the Phase One agreement with U.S., China will increase U.S. farm purchases based on domestic demand and market principles, while the U.S. would provide favorable conditions,’ ministry spokesman Gao Feng told reporters at a routine briefing Thursday.

And Reuters writers Susan Heavey and Alexandra Alper reported late last week that, “White House economic adviser Larry Kudlow said on Thursday that China’s ‘serious commitment‘ to buy $40 billion to $50 billion worth of U.S. agricultural goods as part of a phase 1 trade deal would depend in part on private companies and market conditions.”

However on Friday, Reuters writers Karl Plume and Hallie Gu reported that, “Chinese importers have been busy booking fresh purchases of soybeans from Brazil this week, despite the White House announcement that China had agreed to buy up to $50 billion (38.6 billion pounds) of U.S. farm products annually during trade talks last week.

“The purchases from Brazil, rather than the United States, show that Chinese buying has been driven more by price than policy since last week’s preliminary trade agreement that U.S. President Donald Trump hopes will be signed next month.”

Bloomberg News reported late last week that, “China’s top trade negotiator offered positive signals that talks with the U.S. are making progress and both sides are working toward a partial trade deal.

“‘China and the U.S. have made substantial progress in many aspects, and laid an important foundation for a phase one agreement,’ Vice Premier Liu He said at a technology conference in Nanchang, Jiangxi, on Saturday. He reiterated that China is ‘willing to work in concert with the U.S. to address each other’s core concerns on the basis of equality and mutual respect.’”