Recent Updates from the Federal Reserve Banks of Dallas and Minneapolis Earlier this week, the Federal Reserve Bank of Dallas released its Agricultural Credit Survey for the fourth quarter of 2018.

The Fed update indicated that, “Bankers responding to the fourth-quarter survey reported improved conditions across most regions of the Eleventh District. Crop yields have been good, particularly for corn and cotton, although some areas have reported problems with harvests due to excessive moisture. Respondents noted prices as being generally weak, particularly for cattle.” 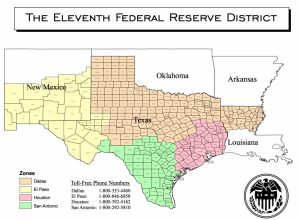 The Ag Survey noted that, “Demand for agricultural loans overall declined for a 13th consecutive quarter. Loan renewals and extensions decelerated, and the rate of loan repayment declined after flattening out in the third quarter. Loan volume fell across all major categories compared with a year ago, with the sharpest declines in dairy, farm machinery and feeder cattle loans.” 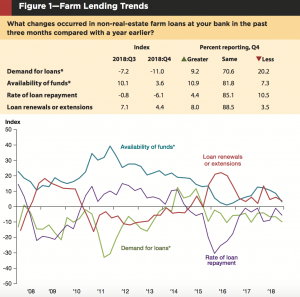 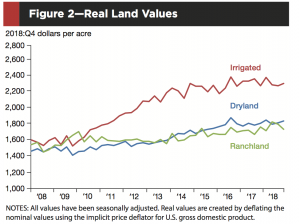 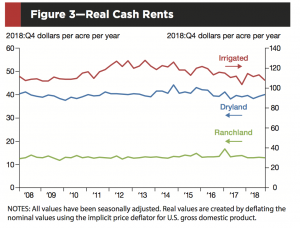 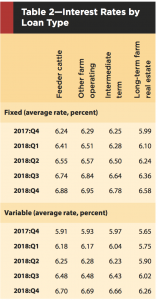 Update from the Federal Reserve Bank of Minneapolis

Last month in its fedgazette publication, the Federal Reserve Bank of Minneapolis published an update by Ronald A. Wirtz (“South Dakota economy seeing slower growth, but not everywhere“) that focused on South Dakota’s economy.

The South Dakota economy has been sluggish of late, mainly due to the slump in the farm economy.

“But growth also depends on where you live, because Sioux Falls has been seeing steady growth for some time; Rapid City has lagged its larger peer in the state, but is also seeing some acceleration. And the rest of the state has been largely flat, or worse, a circumstance that circles back to the farm sector.” 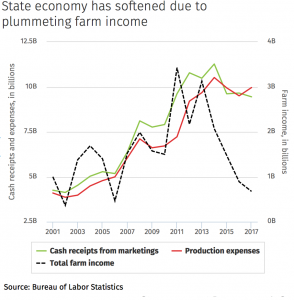 The update noted that, “Data show that the South Dakota economy has been slow-growing compared with the national average and neighboring states like Minnesota and Montana. During the economic recovery (starting in mid-2009), South Dakota experienced an economic surge, as the farm economy was humming and the state’s metro regions (Sioux Falls and Rapid City) were seeing steady growth.” 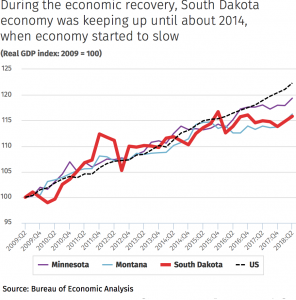 Mr. Wirtz explained that, “But once crop and livestock prices started to soften, so did the South Dakota economy (Montana’s too, in fact), because agriculture makes up a bigger overall share of the state’s economy compared with Minnesota and the national average.

Since its last peak in 2013, annual farm income in South Dakota has fallen from more than $3 billion to less than $700 million, a drop of 80 percent.

“The good news is that the South Dakota economy has still managed to grow, but at a much slower trajectory. Over the 12 months ending in June 2018, the state’s economy had grown just 0.8 percent, compared with almost 3 percent for the nation as a whole.

“Things could be worse in farm country; state farmers have had great harvests of late. A Brookings banker said that many farms continue to ‘out-yield prices.’ But this banker and others suggested that working capital is running out, and poor years now are eating into farm equity. Debt repayment capacity was also becoming ‘unnerving,’ said one, particularly given rising interest rates.”

The Fed update added that, “Unfortunately, prospects in the farm economy are not great. The U.S. Department of Agriculture is projecting that farm income nationwide by the end of 2018 will hit its lowest level in 15 years, and prices are not expected to rebound much.”