Skip to main content
Home > News > Save Trip to FSA If You Have Corn, Soybean 2019 Prevent Plant Acres

Save Trip to FSA If You Have Corn, Soybean 2019 Prevent Plant Acres

Signups began Wednesday at Farm Service Agency (FSA) locations for agricultural producers around the country who are in need of disaster aid assistance. The U.S. Department of Agriculture (USDA) released details about signups for the Wildfire and Hurricane Indemnity Program Plus (WHIP+) earlier in the week.  The $3.1 billion in disaster assistance is intended to help with recovery efforts for producers in disaster affected counties in 2018 and 2019.

USDA says the disaster losses must have been a result of hurricanes, floods, tornadoes, typhoons, volcanic activity, snowstorms or wildfires that occurred in 2018 and 2019. The relief package includes coverage for on-farm stored commodities damaged by these natural disasters and new programs to cover losses for dumped milk.

“These are for weather events from 2018 and 2019,” said Richard Fordyce, Administrator with the Farm Service Agency.

Even though the disaster aid bill was written, passed by Congress and signed by President Trump, details are still being hammered out. That includes the portion of the program covering prevented planting.

According to USDA’s press release on prevent plant:

“Agricultural producers faced significant challenges planting crops in 2019 in many parts of the country. All producers with flooding or excess moisture-related prevented planting insurance claims in calendar year 2019 will receive a prevented planting supplemental disaster (“bonus”) payment equal to 10 percent of their prevented planting indemnity, plus an additional 5 percent will be provided to those who purchased harvest price option coverage.

As under 2017 WHIP, WHIP+ will provide prevented planting assistance to uninsured producers, NAP producers and producers who may have been prevented from planting an insured crop in the 2018 crop year and those 2019 crops that had a final planting date prior to January 1, 2019.”

That final sentence is causing confusion and concerns from local and state FSA offices to social media. 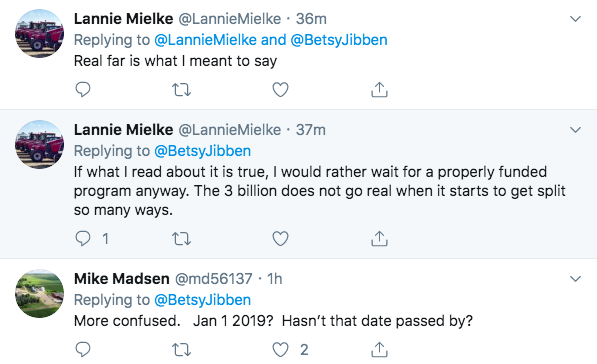 When asking for clarity, multiple local FSA officials telling AgDay the disaster aid program, WHIP+, will only offer some assistance to producers who have prevent plant acres that were from prior to January 1, 2019. In their interpretation, that means row crop farmers who have prevent plant acres for the 2019 crop year, including prevent plant corn and soybeans from spring 2019, are not eligible for sign-ups at this time and should wait to head to their local FSA office.

We talked with FSA Agents in the Midwest who said their counties were not considered disaster counties in 2018 and therefore, they don’t expect many farmers to sign up this week.

“We’ve had a lot of producers calling in and coming in to our county offices in Indiana inquiring about the WHIP+ program and some of the prevent plant coverage details for the 2019 crop,” said Steve Brown, the Indiana State Director for FSA. “We have more information coming on the 2019 crop to cover a portion of the prevented planting, but that has not been announced at this time.”

FSA says details of that program with aid for this year should be released “very soon.”

“There’s a mention of prevent plant in that legislation. Those provisions are not completed yet at this point,” said Fordyce. “We expect to have some announcement on the prevent plant provision of the legislation here very soon.”

This means farmers who have prevent plant acres in 2019 due to flooding will have to wait for a signup date, coverage amount and where the assistance is coming from to be ready at a later time. Folks with USDA say that second program for 2019 prevent plant is not currently part of WHIP+ and they’re still trying to figure out if the compensation will come from FSA, crop insurance or another entity.

Only a few, limited details have been released for this second program for producers and a sign-up date has not been released.

However, in its release, USDA saying producers will receive a payment equal to 10 percent of their prevented planting indemnity, plus an additional 5 percent will be provided to those who purchased the harvest price option (HPO) coverage with their crop insurance.

A spokesperson for USDA sent a written statement to AgDay: