Skip to main content
Home > News > Sluggish Soybean Sales to China in First Half of 2019, as Trade Talks Continue This Week

Sluggish Soybean Sales to China in First Half of 2019, as Trade Talks Continue This Week

As U.S., China trade negotiations continue this week in China, recent news articles have discussed Chinese imports of U.S. soybeans, as well as the prospect of additional Chinese purchases of U.S. farm goods.  Today’s update highlights some key points from a few of these business news articles.

Bloomberg writer Alfred Cang reported on Sunday that, “U.S. soybean supplies to China, the world’s biggest market, slumped in the first half of 2019 to the lowest level in more than a decade as little progress was made on ending a trade war between the two countries. 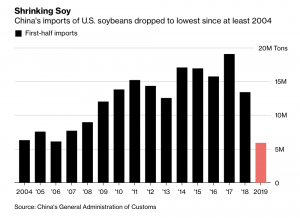 “China imported 614,806 tons of soybeans from the U.S. in June, according to customs data.

That brought the total inbound shipments of the oilseed used to produce cooking oil and animal feed to 5.9 million tons in the first six months this year, the lowest half-year level since at least 2004, according to Bloomberg calculations.

Mr. Cang added that, “U.S. farmers, who harvest soybeans from September to November every year, have been among the biggest victims in the trade war as Chinese buyers shift to other markets for agricultural products amid retaliatory tariffs.”

And Reuters writer Cate Cadell and Hallie Gu reported on Sunday that, “Chinese state media said on Sunday the United States has shipped several million tonnes of soybeans to China since the two countries’ leaders met in June, although U.S. government data shows that the volume was much less.”

Based on what I know, the Chinese side is speeding up the process of buying US farm products. Chinese side sees the purchase as showing goodwill to the US side. Face-to-face trade talks will restart on Tuesday and it is hoped the goodwill will be reciprocated by the US side.

The article stated that, “U.S. Department of Agriculture (USDA) data shows that just 1.02 million tonnes of soybeans were shipped to China for the period starting from the G20 meeting June 28 to the week ended July 18, the most recent date for which data is available. These shipments reflect purchases made earlier this year, and the USDA is expected to release new data this week.

“But state broadcaster CCTV, citing China’s National Development and Reform Commission and Ministry of Commerce, said China has made enquiries to U.S. suppliers for the purchase of soybeans, cotton, pork, sorghum and other agricultural products since July 19 – and some sales have been made.

“‘As long as the American agricultural products are reasonably priced and of good quality, it is expected that there will be new purchases,’ the report said. Companies involved in the sales have applied for exclusions to tariffs on agricultural goods with Chinese customs officials, it said.”

The Reuters article also explained that, 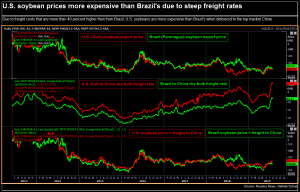 Sunday’s article added that, “Five Chinese soybean crushers are eligible for exemptions from 25% tariffs on some U.S. cargoes, the state planner told them, but they are unlikely to be in a rush to buy in bulk as the industry grapples with poor crushing margins and a premium on U.S. soybean versus Brazilian soybeans. 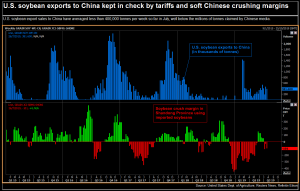 “China’s demand for soybeans crushed into livestock feed has also decreased dramatically in recent months as African Swine Fever swept across the country, resulting in the death or culling of millions of pigs.” 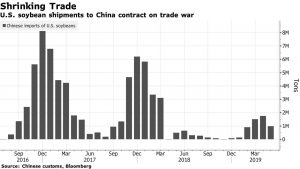 “The decision was due to worsening profitability and uncertainties about trade conditions, the company said by email, without elaborating. Gavilon Group, another U.S. trader owned by the Japanese conglomerate, will continue trading soybeans to China without any changes, it said.”

Wall Street Journal writers Josh Zumbrun and Chao Deng reported on Sunday that, “Negotiators for the U.S. and China will face off in Shanghai this week in another attempt to piece together a trade accord amid much lowered expectations for the kind of sweeping deal that appeared within reach this spring.

“People close to the talks said a major breakthrough is unlikely on points that led to negotiations breaking down in early May, but that modest wins might be obtainable. That includes the U.S. insistence that China commit to legal changes to protect intellectual property and abandon state subsidies to business, and Beijing’s demands that the U.S. drop all tariffs as a condition for a deal.”

The Journal writers stated that, “Among the possible smaller achievements that might be obtainable, close observers say, would be a commitment by China to purchase more agricultural products and action by the U.S. to relax its ban on U.S. companies selling to telecommunications equipment giant Huawei Technologies Co., which President Trump has already agreed to do in general terms.

“Progress toward a small agreement on Huawei and agricultural purchases could set the stage for negotiators to tackle bigger issues in a follow-up meeting in Washington, the people following the talks said.”

Global #soybean consumption is anticipated to reach a new record in 2018/19, led by gains in Argentina following a significant improvement in local production. However, uptake in China could fall, reflecting lower hog feed demand amid ASF. 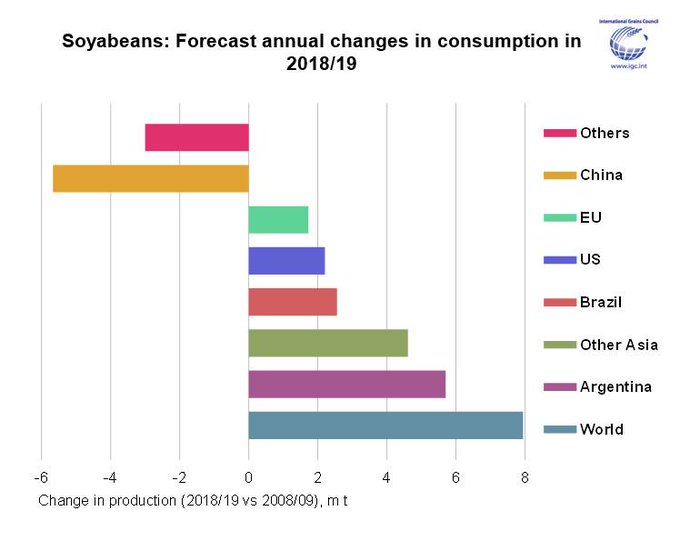 Zumbrun and Deng pointed out that, “U.S. moves to relax restrictions on U.S. companies selling technology to Huawei have so far fallen short of Beijing’s expectations for a complete removal of restraints, [Wei Jianguo, a former vice minister of commerce who is now with the government-backed China Center for International Economic Exchanges] said. The Trump administration wants firms to apply for exemptions, something Mr. Wei called a ‘U.S.-concocted method.’

“The Chinese state-run news agency, Xinhua, reported Sunday that Chinese firms since July 19 have asked U.S. companies about prices of agricultural products. Several million tons of U.S. soybeans have been shipped to China since the two countries’ leaders agreed to resume trade talks last month at the G-20 summit in Japan, the report said, citing the country’s top economic-planning agency and Commerce Ministry. It didn’t specify the amount.

“‘Given the false starts when Trump first announced this, we are very cautious about how much we can realistically expect from any new sales’ of agricultural products to China, said Jessica Wasserman, a partner in the international trade and government relations practice at Greenspoon Marder LLP. ‘If there are any purchases, they still will likely be well below what the administration has been pushing for.’”