Recent news items discuss the ongoing impacts of the unprecedented adverse weather that unfolded in the Corn Belt this spring.  Corn prices have increased as supply uncertainty persists.  Meanwhile, commodity export demand remains a concern as the U.S., China trade spat continues.  Today’s update looks at some of these issues in more detail.

Carol Motsinger reported in Thursday’s USA Today that, “The record-breaking deluge has put thousands of acres – and farmers – underwater across [Ohio].

“This time of year, Ohio’s farmland should be alive and brand new again, peppered with the pop of bright green corn stalks already reaching the height of a tall man’s shins. Instead, standing water comes up to the knee in some fields. Plots are more like muddy swamps where the only thing that’s growing is mold and disease and mosquitoes.” 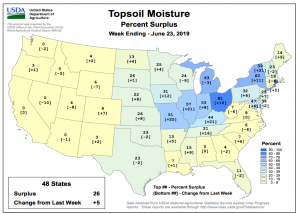 The article stated that, “The planting reports confirm this. On June 11, when almost all of Ohio’s corn should have been planted, only 50% of the crop was in the ground, according to the U.S. Department of Agriculture.

“Farmers should have had 89% of their soybeans in the ground then, too. Instead, they reported about 39% of their crop in the fields.

“This is, of course, not a problem that stops at the Ohio border. The planting season, overall, is at its slowest pace in 40 years.”

The effects of unplanted fields for the farmer is immediate and obvious. Fewer plants mean lower yield means less money in the bank. All of this also means more hardship and heartache for a position that already has the highest suicide rate of any job in this country, double even that of veterans.

Adam Belz reported in this week’s Minneapolis Star Tribune that, “The silver lining of a wet spring and delayed planting has been a rally in corn prices, and prices may rise more this Friday.

“July corn futures on the Chicago Board of Trade have risen by nearly a dollar since early May to nearly $4.50 a bushel. Farmers are locking in prices for December 2020, and watching closely for data on acreage and grain stocks set to be released at week’s end that will give investors a better picture of how much corn is out there, and could lift prices further.” 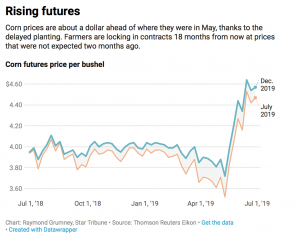 The Star Triune article stated that, “Corn and soybean planting was about two weeks late in Minnesota and much of the Midwest. Some 20% of the Ohio corn crop was unplanted as of Sunday, and almost one in 10 acres of corn hadn’t been planted in Illinois, Indiana, Michigan and Missouri, according to the U.S. Department of Agriculture (USDA).

“Corn prices, which had been in a five-year slump, flourished with the delayed planting, rising to their highest level since June 2014.” 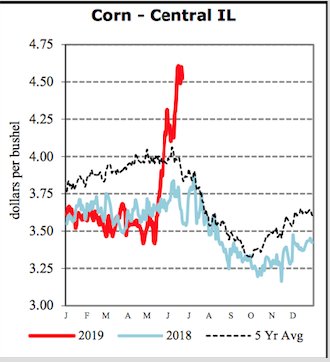 In a related article, Bloomberg writer Michael Hirtzer reported on Tuesday that, “A looming shortfall in U.S. corn production after a historical spat of wet weather means wheat is back on the menu at cattle feedlots in the southern Plains. 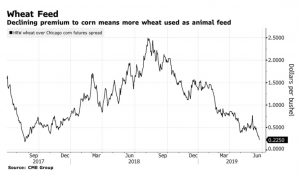 “Surging prices for corn, the gold standard in fattening cattle, are making wheat that’s usually reserved for human food into a relative bargain for feeding livestock. Prices for both crops surged after record rainfall this spring saturated American fields. But corn’s gains have outpaced those of wheat, shrinking the latter’s traditional premium. In some parts of the U.S., the cash spread has even swung to a discount.”

The changing price dynamics in agricultural commodity markets are taking place in an environment of on going trade uncertainty with China.

Politico writers Victoria Guida and Ryan McCrimmon reported this week that, “While trade tensions with Canada and Mexico have eased, Trump’s feud with China — a crucial customer for soybean farmers and other agricultural producers — has escalated.”

The Politico article reminded readers that, “To counteract the financial fallout from his trade war, Trump has directed USDA to design government aid packages for farmers struck hardest by retaliatory tariffs. A new $16 billion program announced in May comes on top of roughly $11 billion in trade relief that USDA has been doling out to farmers since September.”

More specifically with respect to trade, Katie Lobosco and Vanessa Yurkevich reported on Tuesday at CNN Online that, “Agriculture Secretary Sonny Perdue acknowledged this week that farmers are getting hurt by President Donald Trump’s trade war, but expressed optimism that a deal would be struck with China by the end of the year.

“American farmers ‘are one of the casualties here with trade disruption,’ Perdue told CNN’s Vanessa Yurkevich in an exclusive interview.”

The CNN article noted that, “The latest round of aid was announced in May and payments are expected to start going out this summer. But Perdue indicated that farmers should not expect additional money next year.

Earlier this month, Reuters writer P.J. Huffstutter reported that, “Farmers may need a third round of government aid next year if political in-fighting during the 2020 U.S. election cycle prevents the Trump administration from landing trade deals and reopening top export markets, the head of the largest U.S. farm lobby said on [June 18th].

“If the U.S. Congress cannot ratify the United States-Mexico-Canada Agreement (USMCA), then it and the Trump administration could find it difficult to finalize any trade deals with other large markets, including the European Union and Japan, American Farm Bureau Federation President Zippy Duvall said.”

Duvall said the Farm Bureau is growing concerned that U.S. farmers could potentially enter a third year with restricted access to key export markets – at a time when the farm economy has been battered by low crop prices and is battling flood damage across the Midwest.

And Reuters writer Tom Miles reported this week that, “China, India, the European Union, Ukraine and Australia told the World Trade Organization on Wednesday that U.S. farm subsidies risked distorting global markets, and said they feared such funding would be repeated, a Geneva trade official said.”

I asked President Trump if he’s prepared to bail out the farmers again next year. He said: “I will do whatever I have to do to help our great farmers. Our great farmers were targeted by China, they’ve been incredible, and I am helping them and I will always help our farmers.” 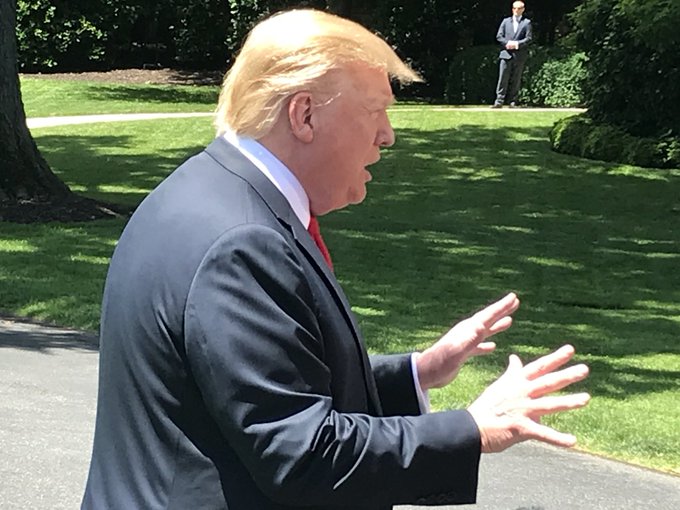 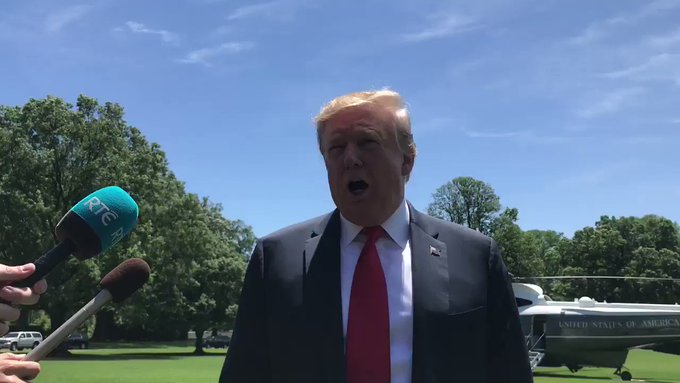 The Reuters article noted that, “Washington told the WTO’s agriculture committee in February that a $12 billion ‘market facilitation package’ to assist farmers hit by trade disruptions would be a one-off. But last month it announced a second tranche of up to $16 billion.”

“An Australian diplomat said the U.S. subsidies were equivalent to two-thirds of Australia’s entire agricultural output and the policy risked distorting the world market, the official said.”