June 5 is the final planting date for corn in most of Illinois, Indiana, and Ohio. After that date, farmers can decide to plant corn or take a prevented planting payment for fields or partial fields they intended to plant to corn.  The date of planting will impact expected returns from corn planting.  Herein we show figures that illustrate the impacts of planting date on expected returns from planting corn by date after June 5.  Overall, the returns from corn planting decline with later planting, causing taking the prevent plant payment to look more attractive.  In general, cash prices must increase from current levels before planting corn results in the highest return in most situations analyzed.  If all costs of production need to be incurred, cash corn prices need to exceed $4.50 on June 6 if the RP has an 85% coverage level.  This break-even price goes over $5.00 per bushel by the second week of the late planting period.

The following YouTube video illustrates the impacts that later planting has on expected returns from corn planting and compares those returns to net returns from taking prevented planting, thereby illustrated the construction of the Figures shown below.  The video also shows worst case scenarios where net return will result in the lowest returns as compared to the prevent planting payment.  These worst case scenarios are not shown below.

There are slight variations in assumption used in this video as compared to the graphs below.  In particular, slightly different yield decline assumptions are used and a $45 per acre Market Facilitation Program payment is included on planted acres.  None of these differences cause qualitative changes Figures 1 through 6 below.

Planting after the final planting date will have the following impacts on returns.

Besides the time of planting, other variables will have a large impact on the advisability of planting corn.  They include:

For farms with RP coverage, expected returns from planting corn are also compared to the prevented planting payment. Returns are calculated with the following assumptions:

Evaluation of prevent plant payments and more extensive options for farms with insurance coverage has been covered in recent farmdoc daily articles (see farmdoc daily May 29, 2019, May 21, 2019, May 14, 2019).

As an example comparing returns from prevent plant versus returns from planting corn, consider a farm with RP 85% coverage and a 220 APH. The prevent plant payment is calculated based on coverage and crop insurance price. This is constant across all three cash price levels because it is not dependent on actual market price the crop is sold at. Expected net returns from prevent plant are $368 dollars. The prevent plant returns includes the prevent plan payment less assumed expenses for crop insurance premium and weed control ($43 per acre). In this example the farm has not yet incurred any expenses for the intended corn crop, leaving $470 of costs yet to be incurred if planting. If making a decision in a situation where nitrogen and/or herbicide have already been applied, those expenses would need to be factored into the prevent plant net return calculation. Note that net returns for both prevented planting and for planting corn are not net income. Overhead and land costs still must be subtracted, and any assumed expenses associated with the planned crop must also be subtracted, likely resulting in losses on many farms.

The expected net returns from planting include grain sales plus crop insurance payments less input expenses incurred in raising a crop.  MFP payments are assumed not to exist or are applied to both planted and prevented planting acres Expected net returns from planting are dependent on the market price and will change depending on price for which the crop can be sold. The calculated crop insurance indemnity payment also changes depending on the price assumption, the calculation uses the expected price (cash price plus $0.25 basis adjustment). Three possible cash price levels are considered. 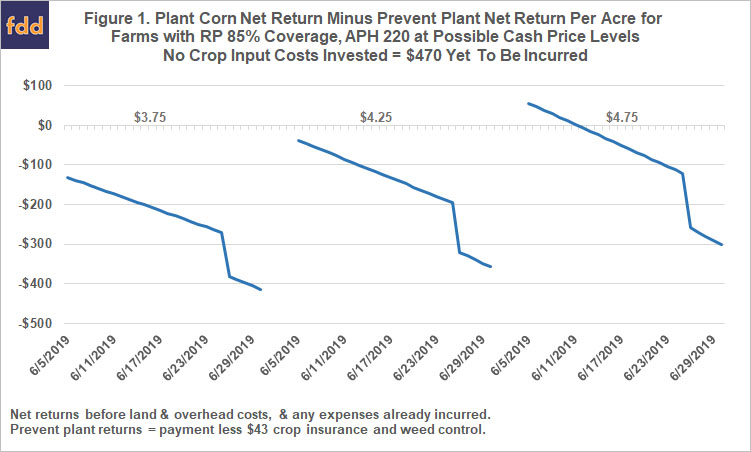 As a second example shown in Figure 2, we consider the same situation except all nitrogen and herbicide are applied and the field is ready to be planted. In this case we assume $320 per acre costs left to be incurred. 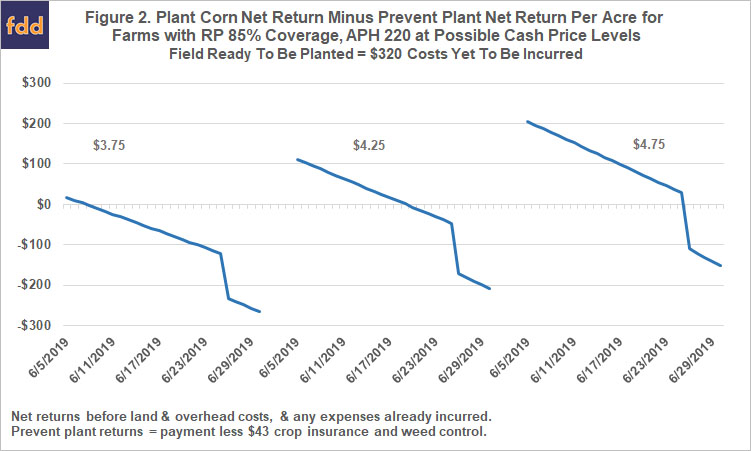 Because expenses for the planned crop have already been incurred, the point at which prevent plant results in higher returns is pushed farther into June at all three price levels. Planting would be optimal through June 19th with a $4.25 cash price and through June 25th, the entire late plant period, with a $4.75 cash price.

The following set of figures show net returns from planting corn in June under three coverage levels, three APH levels, and at three potential price levels. The same methodology described in detail for Figures 1 and 2 applies to Figures 3-6. 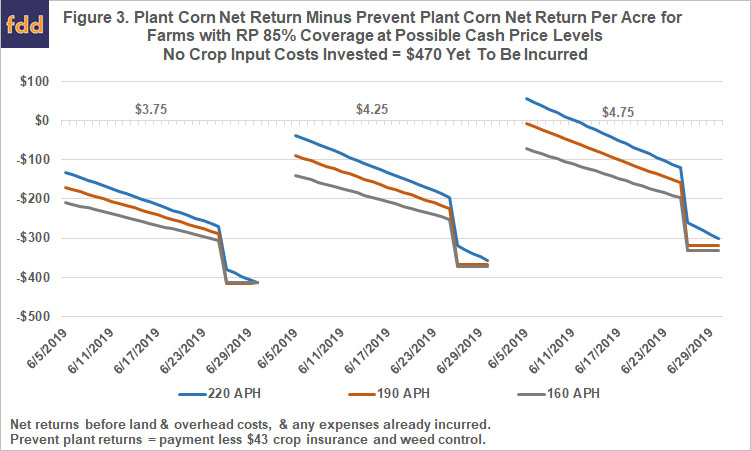 For cash prices of $3.75 or $4.25, the line is below $0 throughout June. A prevented planting payment is expected to have larger returns than planting corn on any date in June for all three APH levels. 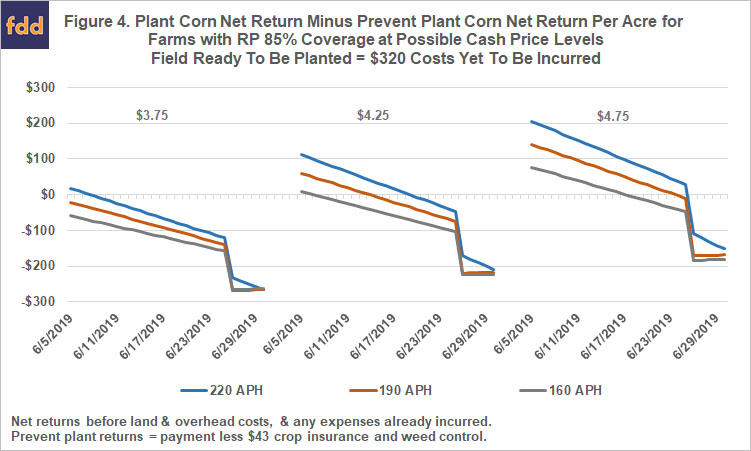 For cash prices of $3.75, prevented planting payment is expected to have larger returns than planting corn on any date in June for all three APH levels, expect APH 220 through June 7. At price levels of $4.25 and $4.75, planting corn into the late planting period can result in higher returns than the prevent plant payment, particularly for higher productivity land.

In Figure 5, net returns are shown at three APH levels for farms with RP 75% coverage and $470 of costs left to be incurred. 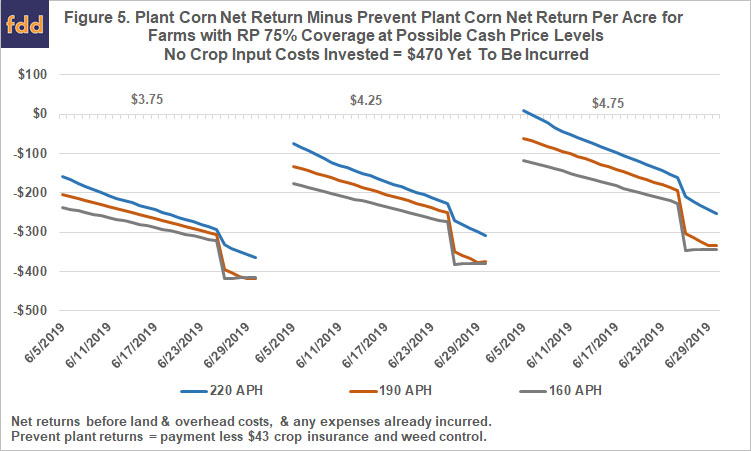 For cash prices of $3.75 or $4.25 the line remains below $0. A prevented planting payment is expected to have larger returns than planting corn on any date in June for all three APH levels.

If cash price is $4.75, planting corn is expected to have larger returns than a prevented planting payment through June 5 for farms with a 220 APH. For farms with the other APH levels, the prevented planting payment remains optimal throughout the month of June. Despite a lower prevent plant payment for those with RP 75% as compared to RP 85%, prevent planting remains optimal because loss in returns given the expected daily yield decline is larger than the increase in indemnity payment.

In Figure 6, net returns are shown at three APH levels for farms with RP 75% coverage and $320 of costs left to be incurred. 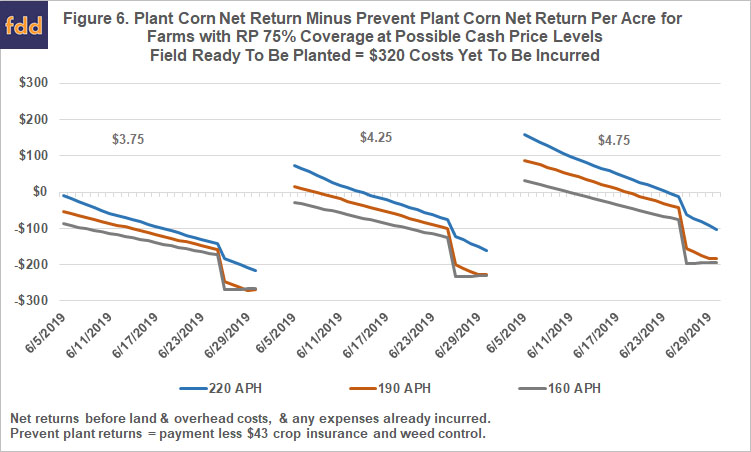 Even with an assumed $150 of expenses in the planned crop already incurred, prevent plant is optimal at a $3.75 cash price and a $4.25 cash price, with the exception of higher productivity land. At $4.75, planting corn is optimal through June 10 for APH 160 but through June 23 for APH 220.

In Figure 7, net returns are shown at three APH levels, included as an indicator of farm productivity, for farms with a county level policy or no crop insurance coverage. 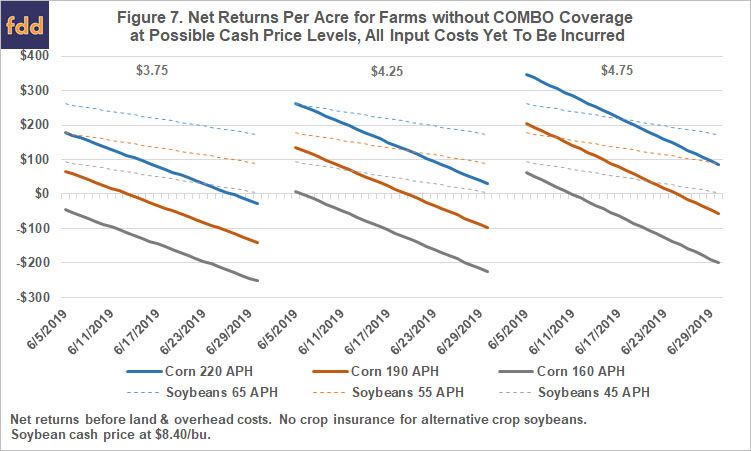 Farms without crop insurance or farms with a county level policy are not eligible for a prevented planting payment. These farms may weigh the option of planting another crop instead of corn.

In this comparison the expected corn returns are compared to expected soybean returns for planting on the same date and assuming a $8.40/bu cash price.

At a cash price of $3.75 for corn, farms can expect higher from planting soybeans, especially for lower productivity land.  The exception would be if corn is relatively more productive on the farm than soybeans. For example, a farm with an APH of 220 for corn and an APH of 55 for soybeans could expect greater returns from planting corn in the first few days of June.

At a cash price of $4.25 for corn, soybean generally offer better returns especially for lower productivity land.  Again, exceptions could occur if corn has a higher than usual productivity relative to soybeans.

This analysis clearly illustrates how dynamic this decision is, as well as the important roles played by price, date of planting, and soil productivity.

As this article has illustrated, the specifics of the best decision can vary substantially by farm. Farmers are encouraged to utilize the Prevented Planting Comparison Tool, which is included in the Planting Decision Model, a Microsoft Excel spreadsheet available for download from the farmdoc website to assist in making decisions. This tool can be used to evaluate expected returns from late planting for all farmers, including those who do not purchase crop insurance or do not have a COMBO policy qualifying for a prevented planting payment.

Be sure to click the “Use Default Expected Yield” button to ensure that the yield used in the calculations reflects the later planting date. The maximum yield should be set to the yield if planted at the optimum date. The user can indicate no insurance or select the appropriate policy type and coverage level and set actual APH on the farm to be evaluated.

Once all other inputs are set to align with the farm, the user can change planting date to evaluate expected returns for the specific farm as of a specific planting date. We stress the importance of doing this on a farm by farm basis to assist in making the best possible decision for each farm.

The over 2 bushel per acre daily decline in corn yield in June and the decline in crop insurance guarantee during the late planting period mean that the returns from planting corn decline rapidly after June 5.  Corn prices will need to rise from the levels at the end of May 2019 before planting corn will be the alternative with the highest return in most of the situations analyzed in this report, but especially for lower insurance coverage levels and lower productivity soils.  The importance of soil productivity suggests that many farmers will find it useful to consider whether a portfolio approach makes sense, such as plant corn on higher productivity soils, especially with higher insurance coverage levels, and take prevent plant on lower productivity soils.  These results also document how complex and dynamic this decision is.  Thus, we strongly encourage you to talk to your insurance agent.  There are many aspects of this decision that we have not touched on or only briefly mention, such as impact on APH in future yields and whether or not your insurance premiums will be altered if you no longer meet the criteria for enterprise units.