The Economic Advisability of Lowering 2019 Nitrogen Application Rates on Corn

Spring field operations will soon begin, and nitrogen applications on corn will commence.  More nitrogen will be applied this spring than is typical because wet weather limited fall applications. University-recommended nitrogen application rates in Illinois are between 140 and 180 pounds of actual nitrogen per acre for corn-following-soybeans.  For farmers applying above those rates, application reductions seem prudent this year.  If a farmer is uncomfortable lowering to the University-recommended rates, experimenting by leaving strips in fields seems prudent.

Two economic factors suggest urgency in lowering nitrogen rates this year. First, net incomes on Illinois farms could be extremely low in 2019. Projections indicate average income on grain farms enrolled in Illinois Farm Business Farm Management (FBFM) could be -$55,000 per farm if prices maintain their current levels and yields are not exceptional (see farmdoc daily January 15, 2019).  This average income would be the lowest since FBFM began collecting consistent income data starting in the 1970s. Although higher yields or higher prices could result in higher incomes, it seems more reasonable to expect very low incomes in 2019. Given these low incomes, reducing costs is crucial, particularly if those costs do not increase revenue.

Second, nitrogen fertilizer prices in 2019 have been increasing and will be above levels of the last three years (see Figure 1). On March 14th, the Agricultural Marketing Service (AMS) — an agency of the U.S. Department of Agriculture — reported an average anhydrous ammonia price in Illinois of $615 per ton, which is $97 per ton above the 2018 March average price of $518 per ton. The 2019 price also is above prices in March in 2016 and 2017 (see Figure 1). A higher nitrogen price suggests lowering applications, particularly given that the 2019 expected corn price is roughly at the same level as in 2017 and 2018. 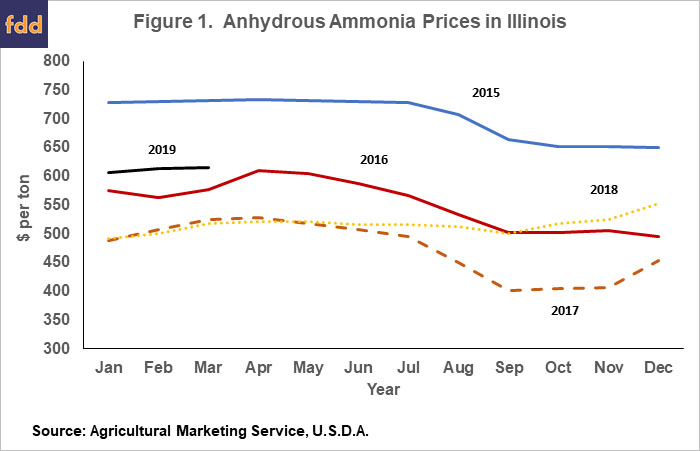 “Maximum Return to Nitrogen” (MRTN) rates are available from the Corn Nitrogen Rate Calculator (http://cnrc.agron.iastate.edu), a website maintained by universities in Corn Belt states. MRTNs give the nitrogen rate that, over time, will produce the highest economic return for nitrogen use. Many nitrogen rate trials provide the basis for determining MRTNs (see the “About” section of Calculator for more detail).

Table 1 shows MRTNs from the Corn Nitrogen Rate Calculator for northern, central, and southern Illinois. These rates are shown for “corn-following-soybeans” and “corn-following-corn.” MRTNs also are given where the source of nitrogen is anhydrous ammonia and 28% nitrogen solution.  Note that the rates in Table 1 include all sources of nitrogen, and credits should be given for nitrogen in DAP (see Using the N Rate Calculator). 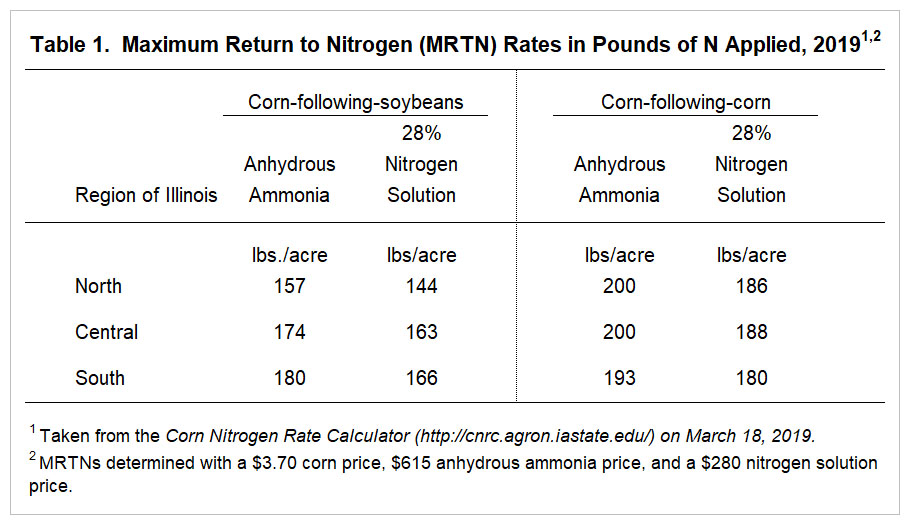 Precision Conservation Management (PCM) is a farmer service program led by the Illinois Corn Growers Association in partnership with over 30 partners.  The mission of PCM is to increase conservation practice adoption using farm business management principles.  With 200 farmers enrolled in its 16-county service area, PCM represents about 200,000 acres of farmland in Illinois.

Farmers enrolled in PCM provide detailed production records geo-linked to fields, with data provided including nitrogen applied and yields.  Data from 2015 through 2017 have been analyzed and suggest that many farmers apply above MRTN rates, with some exceeding 200 pounds of nitrogen per acre.  In 2015 through 2017, higher than MRTNs did not lead to higher yields.

Costs increase as pounds of over-applications increase. Take a application that is 50 pounds above the MRTN.  For 28%, this application will have an additional cost of $25 per acre.  A farm with 1,000 corn acres would have $25,000 higher costs, and $25,000 less net income.

The MRTN takes into consideration many trials, and higher yields will occasionally occur at rates above MRTNs. Over time, however, profits should be maximized at rates near the MRTN (see N rate Calculator Updated). The $25 per acre costs would have to have an addition of 6.8 bushels to cover the cost if the yield above the MRTN was obtained each year. This break-even yield goes up if the yield does not increase each year. For example, the 6.8 bushels increase to 13.6 bushels per acre if the additional application only increases yield in 50% of the years. The break-even yield further increases to 27.0 bushels per acre if the yields respond only in one in four years.

The MRTNs in Table 1 may be considerably below the nitrogen rates used on many farms. Over time, applying above the recommended rate will result in lower profits. Given this fact, lowering applications to the MRTN rate seem prudent. If cutting applications to the MRTN seem extreme, experimentation may be warranted. Placing strips in fields at MRTNs may provide evidence that those rates do result in the most profit.