Reuters writer Richard Valdmanis reported on Wednesday that, “Time has run out for the U.S. Environmental Protection Agency to challenge a federal court ruling that would limit the agency’s use of waivers exempting small oil refineries from the country’s biofuels regulations.

The DOJ did not file an appeal with the 10th Circuit before the court deadline on the small-refinery exemption program. Waiting to hear from EPA.

“The EPA had until the end of March 24 to file a challenge, but by early March 25, no such filing had been entered, according to a Reuters review of the case docket though the U.S. government’s electronic public access service for court records.

A decision by the administration of President Donald Trump not to appeal the ruling would mark a big win for the U.S. corn lobby and a blow to the oil industry.

One of the small refiners that were subject of the 10th Circuit ruling on waivers, has asked the court for an en banc hearing…. Stay tuned

Last week, Bloomberg writer Jennifer A Dlouhy reported that, “The Trump administration doesn’t plan to challenge a federal court ruling that dramatically curbs its ability to exempt oil refineries from biofuel-blending requirements, according to three people familiar with the matter.

“Under a decision reached late this week by top administration officials, the Environmental Protection Agency will now apply that 10th Circuit Court of Appeals ruling nationwide, so that just a handful of U.S. refineries remain eligible for the valuable exemptions. The decision, which follows weeks of deliberations, was described by the people, who asked not to be named before a formal announcement.”

This will eventually matter in biofuels markets. If Trump Admin is not going to appeal the 10th circuit ruling then the SRE program is effectively dead. Have to wait for an official announcement tho. https://twitter.com/FarmPolicy/status/1241493883734892545 …

* Officials directed to look for other ways to help oil refiners. 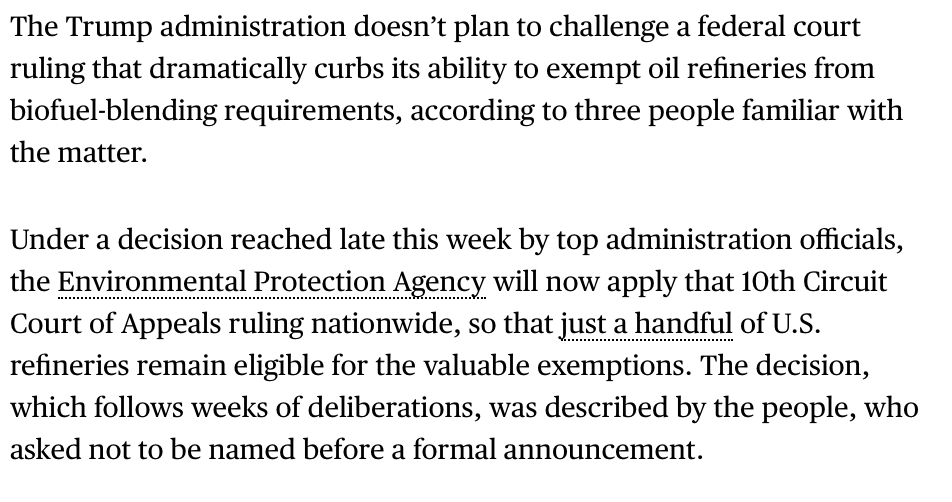 Ms. Dlouhy indicated that, “The administration briefly planned to file an appeal en banc — asking the full 10th Circuit to rehear the case — before a backlash from farming advocates and appeals from Iowa lawmakers. The EPA and Justice Department faced a March 24 deadline to file an appeal, after seeking more time to consider the matter.

“Citing the coronavirus and the current market downturn, refiners have implored the Trump administration for emergency relief, including reducing biofuel-blending requirements nationwide. The EPA has authority under the Clean Air Act to pare annual blending requirements if it determines they ‘would severely harm the economy or environment of a state, a region or the United States.’”

More specifically on the COVID-19 impacts on ethanol markets, Bloomberg writer Michael Hirtzer reported last week that, “U.S. ethanol makers are either halting or significantly cutting their production after the rout in oil prices made biofuels uncompetitive against gasoline, and as coronavirus keeps many drivers off the road.

With oil prices down, ethanol makers lose about 25 cents per gallon of biofuel, said Scott Richman, chief economist at the Renewable Fuels Association trade group. Ethanol this week fell to a record low of less than $1 per gallon.

The Bloomberg article added that, “If too many drivers stay home, there won’t be enough storage available to stow away unused ethanol. That could force plants to close down, according to Jeanne McCaherty, the chief executive officer of Guardian Energy Management, which overseas ethanol plants in Minnesota, North Dakota and Ohio.”

JUST IN: @EthanolRFA tells me they see U.S. #ethanol plants shutting 2 billion gallons of annualized production by end of week due to the demand slump. #OOTT #biofuels #coronavirus

And Reuters writer Jarrett Renshaw reported this week that, “U.S. ethanol producer POET said on Monday that it has suspended corn buying ‘at a number of locations’ due to weak biofuel demand and is evaluating its production levels.

“‘POET has not idled any biorefineries; however, we have temporarily ceased corn purchases at a number of locations and are actively evaluating biofuel production levels to reflect falling gasoline demand,’ said spokeswoman Jessica Sexe.”

“Refining margins for gasoline and jet fuel have tanked because of decreased demand for transportation fuels, as the disease outbreak has forced businesses to close and governments to push residents to avoid travel and public places,” the Reuters article said.