Politico writer Adam Behsudi reported on Wednesday that, “The United States and China are closing in on a deal that includes broad agreement on how the Trump administration will roll back a portion of the tariffs it has imposed on more than $250 billion-worth of Chinese goods, according to two people close to the talks.

“The two sides have also reached an understanding on how to enforce the agreement, although the sources cautioned that details still need to be worked out when a Chinese delegation arrives in Washington on May 8.

Expectations are high that the two sides could announce a deal by the end of next week, setting the stage for a summit between President Donald Trump and Chinese President Xi Jinping to sign it.

The Politico article noted that, “U.S. Trade Representative Robert Lighthizer and Treasury Secretary Steven Mnuchin wrapped up a quick visit to Beijing on Wednesday where they met with Chinese Vice Premier Liu He for a working dinner and a formal discussion the following day. Mnuchin tweeted that the meetings were ‘productive.’”

More narrowly, Mr. Behsudi explained that, “The two sides have reached general agreement on a plan for the U.S. to immediately remove a 10 percent tariff on a portion of the $200 billion worth of Chinese imports affected by the penalty and then phase in lifting the duties on the rest of the items ‘quickly,’ said one of the people familiar with the discussions.

“A 25 percent tariff the U.S. has imposed on roughly $50 billion-worth of other Chinese goods would likely stay in place longer, possibly until after the 2020 election, leaving it to a second-term Trump administration or a new president to deal with, the source said.”

The Politico article added that,

The two countries continue to debate the terms of leaving tariffs in place. It’s still unclear whether China would lift its retaliatory tariffs on U.S. exports like soybeans and pork or shift retaliatory tariffs to other products, the people said. China has imposed counter-tariffs on roughly $110 billion worth of U.S. goods.

William Mauldin reported on the front page of Monday’s Wall Street Journal that, “President Trump’s push to revamp North America’s trade rules is hitting a roadblock in Washington as Democrats and labor groups demand changes, dimming its chances of passage before next year’s presidential election.”

“The deal must still be ratified by all three countries, and there is no deadline for that to happen. But with the U.S. election season approaching, some Republicans and trade experts said Democrats may be seeking in part to deny Mr. Trump a political win—or at least to exact a heavy price for advancing the deal,” the article said.

The Journal article stated that, “Some Republicans, meanwhile, are pushing for the removal of steel and aluminum tariffs imposed on Canada and Mexico. In an opinion article published in The Wall Street Journal on Sunday, Senate Finance Committee Chairman Chuck Grassley (R., Iowa) said those tariffs are a ‘significant roadblock’ to approval of USMCA.”

Meanwhile, Bloomberg writers Justin Sink and Jenny Leonard reported on Tuesday that, “White House acting Chief of Staff Mick Mulvaney raised the possibility that the existing Nafta trade agreement could remain in effect if Democrats reject a replacement that the Trump administration negotiated with Canada and Mexico.

“‘You could stay status quo,’ Mulvaney said Tuesday at the Milken Institute’s conference in Los Angeles. ‘You could withdraw from Nafta, which the president has talked about many, many times. Or you could go all the way back to the beginning and renegotiate from scratch with the Canadians and the Mexicans. I can assure you — I think it’s fair to say that last thing is unlikely to happen.’

“‘Your real two Plan Bs are either Nafta or withdraw from Nafta,’ he said.”

And the Chicago Tribune editorial board pointed out recently that, “Since NAFTA came into force, U.S. agricultural exports to Mexico and Canada have quadrupled. Mexico is the biggest market for U.S. corn and the second biggest for soybeans — crops that are mainstays of the Illinois farm economy. Our farmers also sell a lot of beef and pork there.

In all, Mexico and Canada purchase $2.8 billion worth of agricultural products from Illinois. The new accord is valuable mostly because it preserves the duty-free commerce that has been so good for American farmers.

On Wednesday, Washington Post writers Erica Werner and Damian Paletta reported that, “President Trump and senior White House officials are working to salvage political support for a revised trade pact with Mexico and Canada, stunned by bipartisan blowback that appeared likely to scuttle a key initiative.”

“Trump’s new courtship of Democrats on trade came as he is simultaneously trying to prevent Republicans from bolting. A number of Republicans have objected to Trump’s hardball tactics in the trade talks and want him to start offering Canada and Mexico immediate concessions,” the Post article said.

Reuters writer Humeyra Pamuk reported earlier this week that, “The United States may push for a quick trade deal with Japan to gain the same access to agricultural markets as some other Japanese trade partners, U.S. Secretary of Agriculture Sonny Perdue said on Tuesday.

Ms. Pamuk pointed out that, “Perdue said a narrow deal could be expanded later into a more comprehensive trade agreement.

‘We want a quick resolution of our agricultural request here … maybe temporarily that could then be fleshed out over longer period,’ Perdue told reporters.

The Reuters article stated that, “Perdue said U.S. farmers should get the same access to Japanese markets as countries that have signed up to the Pacific trade deal. Trump walked away from that deal early on in his presidency, claiming it was a bad deal for the U.S. economy and workers.”

Nonetheless, Financial Times writers Demetri Sevastopulo, James Politi and Robin Harding reported earlier this week that, “Donald Trump’s hopes of completing a trade deal with Japan next month have been severely dented after he failed to persuade prime minister Shinzo Abe to give the US greater access to the country’s agricultural market.

“At a White House meeting with Mr Abe on Friday, the US president said he hoped trade talks would ‘go quickly‘ and enable him to sign a deal when he visits Japan in late May to meet the new emperor.

However, the US did not offer any concessions to Tokyo and several people familiar with the talks said Mr Abe had stressed that Japan could not soften its stance on agriculture ahead of Upper House elections scheduled for July.

The FT article indicated that, “Ahead of the visit, Robert Lighthizer, the US trade representative, had pushed his Japanese counterpart Toshimitsu Motegi for an ‘early harvest‘ that would have cut barriers to selling agricultural products to Japan. But Tokyo rejected the proposal as it wants a more comprehensive deal with concessions on both sides.” 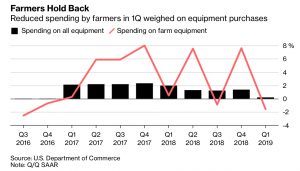 “The Commerce Department cited the drop in agricultural machinery purchases as a contributor to the paltry 0.2 percent quarterly rise in overall business spending on equipment, also the weakest performance since 2016. The softness in the category came despite promises by Trump and Republican leaders that tax breaks for equipment purchases in the party’s signature tax law would boost investment by farmers and manufacturers.”

Last week, New York Times writer Alan Rappeport reported that, “Wisconsin is known as ‘America’s Dairyland,’ but the milk makers who gave the state its moniker are vanishing, falling prey to a variety of impediments, including President Trump and his global trade war.”

The Times article noted that, “Milk prices have fallen nearly 40 percent over the past five years, the byproduct of economic and technological forces that have made milk easier to produce and state policies that ramped up production and sent prices tumbling.

“That has coincided with Mr. Trump’s sweeping tariffs on foreign steel and aluminum, which were intended to help American manufacturers but have set off retaliatory tariffs from Mexico, Canada, Europe and China on American dairy products. Most painful for Wisconsin’s dairy farmers has been a 25 percent tariff that Mexico placed on American cheese, which is made with a significant volume of the state’s milk production.”

And earlier this week, Bloomberg writers Mike Dorning and Katia Dmitrieva reported that,

Personal income for farmers fell by the most in three years in the first quarter, as losses to U.S. agriculture mount from President Donald Trump’s trade wars.

“The Commerce Department on Monday cited the steep decline in farm proprietors’ income as a key factor weighing on the nation’s overall personal income growth in March, even though agricultural producers represent only about 2 percent of total employed Americans.” 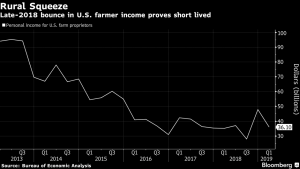 The article stated that, “One-time subsidy payments from the Trump administration to compensate producers for some of their trade-war losses helped prop up farm income in the previous quarter, but earnings plunged by an annualized $11.8 billion in the January to March period, according to seasonally adjusted data. On Monday, Larry Kudlow, President Trump’s top economic adviser, said the White House is prepared to do more to help agriculture.”

In a related article, Reuters News reported this week that, “The Trump administration does not have any active plans to provide more aid to farmers at the moment but can consider the option if the trade negotiations and weak commodity prices linger, U.S. Secretary of Agriculture Sonny Perdue said on Tuesday.”

Meanwhile, Reuters writer P.J. Huffstutter reported this week that, “Across the Midwest, growing numbers of grain farmers are choosing to shed their machinery and find renters for their land, all to stem the financial strain on their families, a dozen leading farm-equipment auction houses told Reuters. As these older grain farmers are retiring, fewer younger people are lining up to replace them.” 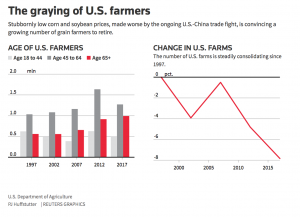 The article stated that, “For many families, leaving farming is a painful but simple calculation: The trade war with China, set off by tariffs imposed by the Trump Administration, has lasted nearly 10 months.

“China, the top buyer of U.S. soybeans, the nation’s most valuable agricultural export, has dramatically reduced its purchases. Grain prices have remained stubbornly low and operating costs are rising fast.”