Skip to main content
Home > News > Trade War Percolates on Multiple Fronts, But President in No Rush on China Deal

Trade War Percolates on Multiple Fronts, But President in No Rush on China Deal

On Monday, Financial Times writers James Politi, Bryan Harris and Benedict Mander reported that, “Donald Trump will reimpose tariffs on imports of steel and aluminium from Brazil and Argentina after accusing the countries of a ‘massive devaluation‘ of their currencies that hurt US farmers.

“The move — which was announced by Mr Trump on Twitter on Monday — sharply escalates trade tensions with the two struggling Latin American economies as they build closer ties with China.”

Brazil and Argentina have been presiding over a massive devaluation of their currencies. which is not good for our farmers. Therefore, effective immediately, I will restore the Tariffs on all Steel & Aluminum that is shipped into the U.S. from those countries. The Federal….

…..Reserve should likewise act so that countries, of which there are many, no longer take advantage of our strong dollar by further devaluing their currencies. This makes it very hard for our manufactures & farmers to fairly export their goods. Lower Rates & Loosen – Fed!

The FT writers explained that, “Argentina and Brazil were initially shielded from the tariffs — worth 25 per cent on steel and 10 per cent on aluminium — but Mr Trump has abruptly decided to restore the countries as targets amid fears that their agricultural producers are outflanking US farmers in global commodity markets. Brazil’s exports of farm products like soyabeans to China have grown rapidly during the US-China trade war.” 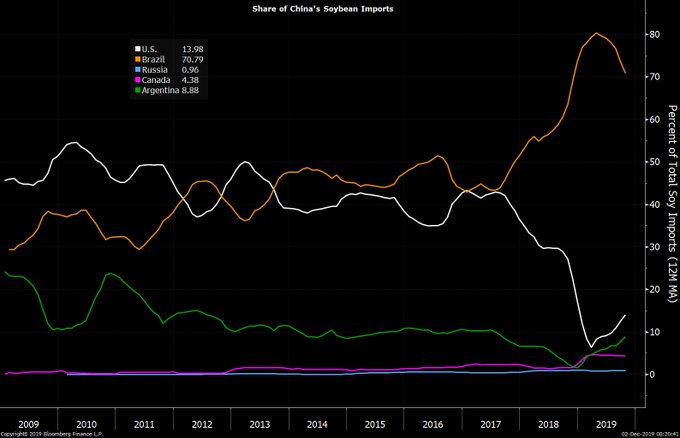 Reuters writers Andrea Shalal and Gabriel Stargardter reported on Monday that, “U.S. farmers represent a key demographic for Trump ahead of the November 2020 election, and they have watched in vain as the trade dispute has hurt the competitiveness of U.S. agricultural products, allowing their Brazilian and Argentine peers to get rich off China.

“‘For many Brazilians, this smells like revenge for their country’s soybean farmers bonanza – they have benefited enormously from the U.S.-China trade war by replacing U.S. soybeans sales into China,’ said Kim Catechis, head of investment strategy at Martin Currie.” 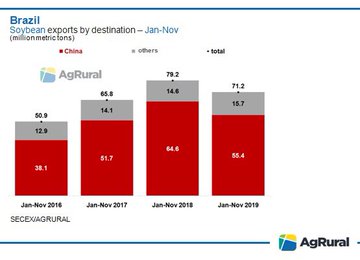 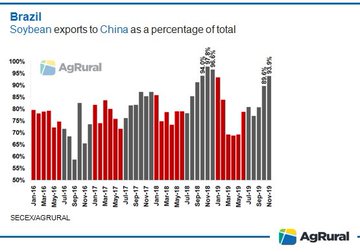 Highlighting a different perspective on U.S. agricultural exports, Bloomberg writers Lydia Mulvany, Marvin G Perez, and Tatiana Freitas reported on Monday that, “President Donald Trump may have bewildered authorities in Argentina and Brazil by announcing on Twitter new steel tariffs as punishment for cheapening their currencies.

But the measure does shine a light on how much the hardy dollar is hurting U.S. farmers.

The Bloomberg article noted that, “American corn isn’t impacted by U.S.-China trade tensions because the Asian nation doesn’t buy much of it. Still, U.S. corn exports are down 60% this marketing year mainly because the strong dollar is making it pricier for overseas buyers at a time when global competition is getting fiercer…[and]…With the South American countries reaping bumper crops and Ukraine becoming more productive agriculturally, U.S. farmers are facing increasing global competition.” 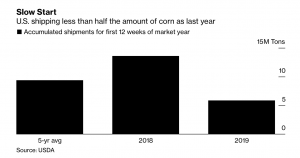 The Bloomberg article added that, “If the trade war and tariffs ‘went away tomorrow, we’d still have a problem in U.S. agriculture, and that’s a strong dollar,’ said Ann Duignan, a JPMorgan Chase & Co. analyst, in an interview with Bloomberg TV last week. ‘The reality of it is, the Chinese will buy at competitive prices, they’re not going to pay up for our commodities.’”

And farmdoc’s Todd Hubbs noted on Monday that, “The huge second corn crop in Brazil combined with a strong dollar saw U.S. exports whither in late summer and into the early harvest period.”

However, Reuters writer Marcelo Teixeira reported last week that, “Domestic demand for corn is expected to grow 6% in Brazil in 2020, driven by increasing corn-ethanol production and buying from the meat industry, which uses the cereal to make livestock feed, Dutch bank Rabobank projected on Thursday.

That outlook would likely reduce exports from one of the world’s top corns exporter next year, opening room for the United States and other players, Rabobank’s grain analyst Victor Ikeda said.

“Fallout from the president’s renewed embrace of tariffs could cloud prospects for future or ongoing talks with countries in Asia and Europe,” the Post writers said.

“The administration’s action against France may be designed to create leverage for just such a negotiation. At issue is a 3 percent tax France introduced last year, which the administration says would unfairly target America’s digital economy icons.”

With respect to China, New York Times writers Katie Rogers, Keith Bradsher and Ana Swanson  reported this week that, “President Trump signaled on Tuesday that he was in no rush to end a long trade war with China, suggesting that he could wait until after the 2020 presidential election to strike a deal and sending stock prices tumbling.

“‘I have no deadline,’ Mr. Trump told reporters during a wide-ranging 52-minute appearance in London with Jens Stoltenberg, the NATO Secretary General. ‘In some ways I like the idea of waiting until after the election for the China deal.’

“He added: ‘But they want to make a deal now, and we’ll see whether or not the deal’s going to be right, it’s got to be right.’”

Wilbur Ross says China trade talks are “one step forward, one step backward” and that the ball is in China’s court to get phase one done. https://video.foxbusiness.com/v/6111108569001/#sp=show-clips …

The Times article noted that, “American and Chinese officials have remained fairly optimistic that a deal will be struck before the new tariffs take effect Dec. 15, but they say the final decision will fall to Mr. Trump and [Xi Jinping, China’s top leader].”

Sources in Beijing informed the Global Times that China insists the tariffs must be rolled back as part of the first-phase trade deal. A US pledge to scrap tariffs scheduled for December 15 cannot replace the rollbacks of tariffs. #ChinaUSTrade #TheBusinessSource 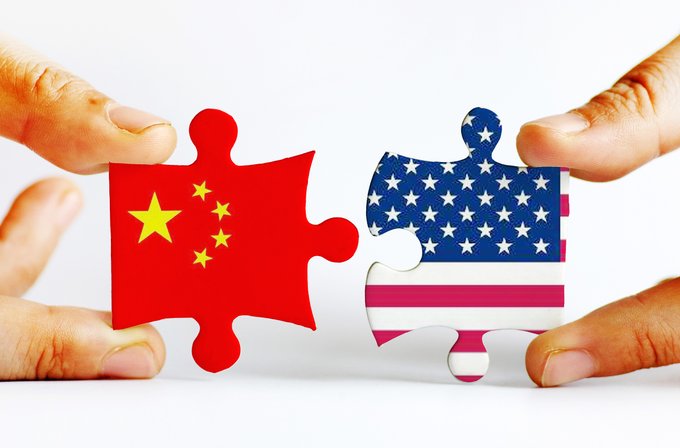 In addition, Bloomberg News reported on Monday that, “China has used up almost all of its waivers to purchase American soybeans that are free of retaliatory tariffs, according to people familiar with the matter.

“Chinese buyers have nearly reached their quota of about 10 million metric tons, said the people, who asked not to be identified because the information is private. Beijing is also unlikely to issue new waivers for U.S. supplies before progress is made in trade negotiations with Washington, one of the people said.” 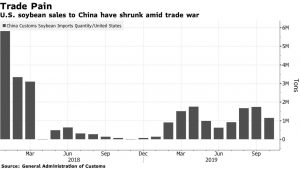 The Bloomberg article explained that, “Without further waivers, Chinese crushers are unlikely to buy from the U.S., removing a key source of demand for American supplies. The Asian country may have already secured about 60-70% of its soybean needs for the first half of next year, especially given demand has contracted because of African swine fever, one of the people said.

“China has been issuing waivers that allow buyers to ship in U.S. soybeans without having to pay the 30% retaliatory tariffs Beijing adopted in response to American levies. The nation’s purchases of American supplies have been viewed as a barometer of the trade negotiations.”

The U.S. and China are moving closer to agreeing on the amount of tariffs that would be rolled back in a phase-one trade deal despite tensions over Hong Kong and Xinjiang, people familiar with the talks said.

“The people, who asked not to be identified, said that U.S. President Donald Trump’s comments Tuesday downplaying the urgency of a deal shouldn’t be understood to mean the talks were stalling, as he was speaking off the cuff. Recent U.S. legislation seeking to sanction Chinese officials over human-rights issues in Hong Kong and Xinjiang are unlikely to impact the talks, one person familiar with Beijing’s thinking said.

“U.S. negotiators expect a phase-one deal with China to be completed before American tariffs are set to rise on Dec. 15, the people said. Outstanding issues in the talks include how to guarantee China’s purchases of U.S. agricultural goods and exactly which tariffs to roll back, they added.”