Trudeau to meet Trump in Washington next week for talks on trade, China 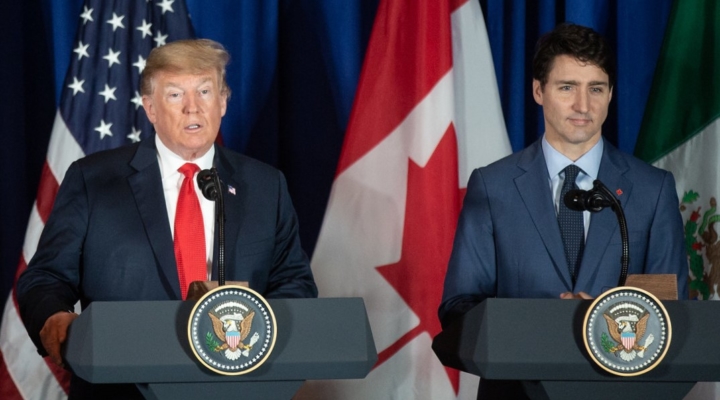 While Trudeau and Trump have crossed paths at various international events in the last year, and had several telephone conversations, this will be their first substantive meeting since the U.S. president insulted the prime minister a little over a year ago after departing the G7 in Quebec. (Embajada de EEUU en la Argentina, Flickr/Creative Commons)

Prime Minister Justin Trudeau and U.S. President Donald Trump are to discuss continental trade and their shared challenges with China in a meeting in Washington next week.

The Prime Minister’s Office says the leaders will use next Thursday’s meeting to talk about the ratification of the new North American trade agreement and outstanding trade disputes between Canada and the United States.

The meeting will also give Trudeau and Trump an opportunity to discuss strategy ahead of the G20 leaders’ summit in Japan at the end of the month, which will give them face time with Chinese President Xi Jinping.

Trudeau and Trump will also talk about two Canadians detained in China for the last six months.

In December, China detained Michael Kovrig and Michael Spavor in apparent retaliation for the RCMP’s arrest of a Chinese high-tech executive on a U.S. extradition warrant.

Canada is caught between its two biggest trading partners on that issue, with Trudeau insisting Canada has to follow the rule of law but having no luck pressing the case with China’s leaders.

Besides the Kovrig and Spavor cases, China has obstructed shipments of Canadian agriculture products such as canola and pork, claiming that they’re ridden with pests or have labelling problems. On Thursday the government promised that Export Development Canada will put up $150 million in additional insurance backing for canola farmers looking to sell in new markets.

U.S. Vice-President Mike Pence has said Trump will press Xi to release Kovrig and Spavor and will link the plight of the two Canadians to broader trade talks between Washington and Beijing. Global Affairs Canada says Spavor received his eighth consular visit from Canadian diplomats on Thursday, one day after Kovrig’s latest visit.

While Trudeau and Trump have crossed paths at various international events in the last year, and had several telephone conversations, this will be their first substantive meeting since the U.S. president insulted the prime minister a little over a year ago after departing the G7 in Quebec.

The two leaders have continued to engage because both governments needed to wrestle a conclusion out of the often acrimonious renegotiation of the North American Free Trade Agreement, which Trump forced on Canada and Mexico.

Now, with the recent removal of U.S. tariffs on Canadian and Mexican steel and aluminum imports, there is renewed momentum to ratify the new trade pact.

Mexico’s Senate is expected to give its final legal approval to the new deal next week, but a delicate political dance continues between Ottawa and Washington over ratification. Trudeau has tabled the government’s ratification bill and it is winding its way through Parliament — slowly — ahead of next week’s adjournment of the House of Commons.

Canadian government sources have said the House could be recalled after its summer recess, in a last session before the October federal election, to deal with ratifying the new NAFTA if the U.S. Congress doesn’t deal with the matter promptly. As much as the government wants to move “in tandem” with the U.S. toward final approval of the new agreement, it doesn’t want to get too far ahead.

Some Democrats in the House of Representatives are less enthusiastic about the new deal, and some would like to deny Trump a trade victory. Some Democrats have said they want to see stronger provisions on labour and environmental standards in Mexico but that country’s lawmakers have approved a new labour-reform law that has won plaudits in Ottawa and among many other lawmakers in Washington.