Reuters writers Jarrett Renshaw and Humeyra Pamuk  reported this week that, “President Donald Trump’s administration has been scrambling to stem the tide of rising anger in Farm Belt states after its decision this month to allow numerous oil refiners to mix less ethanol into their gasoline, sources told Reuters on Tuesday.

Trump held a two-hour meeting on Monday with members of his Cabinet after hearing blowback from farmers after the decision to grant exemptions from the nation’s biofuel laws to 31 refineries, two sources familiar with the discussions said. Trump’s re-election campaign team also took notice of Democratic presidential candidates seizing on the unrest, the sources said.

“Iowa, the nation’s largest producer of corn and ethanol, is a swing state won by Democrat Barack Obama in consecutive elections before Trump rode to victory in 2016 in part by promising to support ethanol.”

The EPA received 42 requests for small-refinery exemptions in 2018. There are only 48 small refineries in the entire country.

The Reuters article noted that, “It was unclear what actions Trump would be able to take to appease angry farmers. Reversing the 2018 waivers was floated as an option but quickly knocked down, the sources said, but the administration was trying to find other ways to boost ethanol demand.” 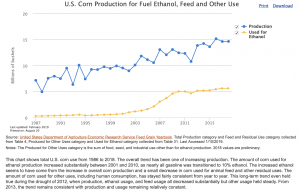 Renshaw and Pamuk added that, “One option advocated by the biofuel industry is to raise the annual amount of ethanol required to be blended into the nation’s fuel pool, or to add back the waived volume onto the annual consumption mandate that the EPA had proposed to set at 15 billion gallons for 2020. No proposals were agreed upon.”

Also this week, Bloomberg writers Jennifer Jacobs, Jennifer A Dlouhy, and Mario Parker reported that, “The Trump administration was stung by criticism over the Environmental Protection Agency’s Aug. 9 decision to give 31 refineries exemptions from annual biofuel-blending requirements — including Iowa Senator Chuck Grassley’s assertion that the Trump administration had ‘screwed’ farmers.”

While Michigan agriculture is struggling with poor weather and trade disruptions, the Trump administration continues to side with Big Oil instead of our farmers. Unacceptable! https://www.reuters.com/article/us-usa-biofuels-trump/trump-intervention-triggered-epas-surprise-biofuel-waiver-decision-sources-idUSKCN1V610F …

The Bloomberg article explained that, “The meeting Monday with Trump was ostensibly to discuss trade with China but quickly turned into a fuels discussion because the U.S. ambassador to China, former Iowa Governor Terry Branstad, had just spent a few days in the state and was concerned about the harm he believed the waivers will cause rural America. 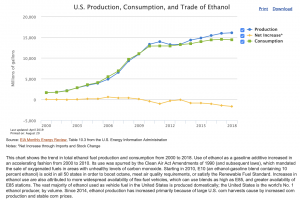 “During the Oval Office session and at least one follow-up call, administration officials discussed broad policy changes designed to mollify farm-state critics and expand the market for corn-based ethanol. At one point, Branstad questioned whether the U.S. could mandate auto companies make all vehicles capable of running on a variety of fuels, so consumers can choose what to use. The idea was quickly rebuffed, with one person in the meeting warning it would provoke a big fight with automakers.”

“Among the other options discussed: fuel policy changes designed to make E15 gasoline that contains 15% ethanol a new nationwide standard, replacing the 10% variety that is now commonplace,” the article said; adding that, “It is not clear that any of the ideas will materialize. Since 2017, Trump has tried to broker a compromise on biofuel policy between warring ethanol and oil industry interests, but the design of the U.S. Renewable Fuel Standard makes it nearly impossible to satisfy both stakeholders simultaneously.

And many of the ideas advanced Monday would require congressional action or lengthy federal rulemaking; some even conflict with regulatory changes already under way.

Jacobs, Dlouhy, and Parker pointed out that, “Another idea under consideration is boosting the amount of biodiesel and conventional renewable fuel the EPA will require refiners to use over the next two years to compensate for expected waivers — effectively forcing non-exempted refineries to make up for the lost quotas. Perdue, the agriculture secretary, has pushed the idea for months, against opposition from EPA officials and oil companies.” 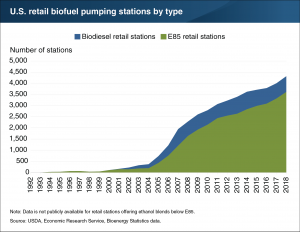 Meanwhile, a separate Reuters News article this week reported that, “U.S. Environmental Protection Agency on Tuesday dismissed the biofuel industry’s argument that waivers granted to small oil refineries were destroying demand and that were damaging for the ethanol producers.

“‘There is zero evidence that EPA’s congressionally mandated small refinery exemption program…has had any negative impact on domestic corn ethanol producers,’ a spokesman for the EPA said in emailed comments.”

“Prices have been under pressure since the U.S. Environmental Protection Agency granted the 31 small refinery biofuel waivers for 2018 earlier this month,” the article said.

Iowa farmers have been warning this Administration for months about the devastating impact these waivers are having on our economy. We’re losing Iowa jobs as a direct result of Washington policies. Iowans are sick and tired of Washington lip service. https://twitter.com/POETbiofuels/status/1163867587412975616 … 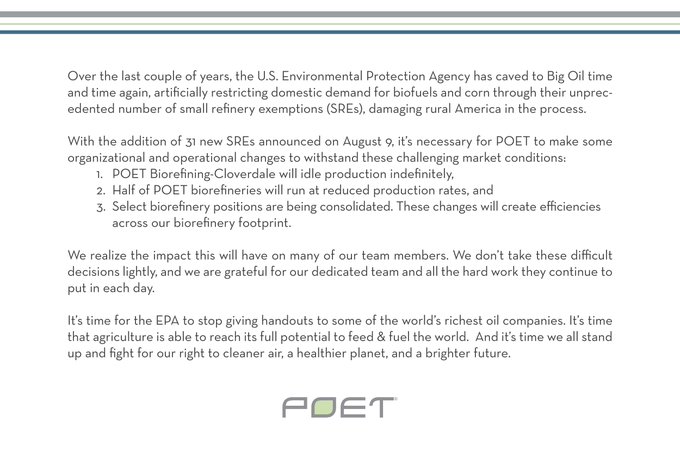 It’s time this Administration lives up to its promise of protecting farmers and rural communities, not large oil companies. That’s why, tomorrow, I plan to call for a federal investigation into the EPA’s questionable biofuel waiver process to hold the agency accountable.

Also this week, DTN writer Todd Neely reported that, “One of the nation’s largest ethanol companies announced on Tuesday it will idle a 92-million-gallon plant in Cloverdale, Indiana, following EPA’s decision to grant 31 new small-refinery waivers to the Renewable Fuel Standard for 2018.

“POET, based in Sioux Falls, South Dakota, stated it has started the process of idling the Indiana plant ‘due to recent decisions by the administration’ regarding the waivers. The company said in a news release that the move means the plant will ‘cease processing of over 30 million bushels of corn annually and hundreds of local jobs will be impacted.’

“POET said it already has cut production at half of its plants, with the largest cuts coming at plants in Iowa and Ohio.”