Reuters writers Jeff Mason and David Shepardson reported this week that, “President Donald Trump dramatically increased pressure on China to reach a trade deal by announcing on Sunday he would hike U.S. tariffs on $200 billion worth of Chinese goods this week and target hundreds of billions more soon.

For 10 months, China has been paying Tariffs to the USA of 25% on 50 Billion Dollars of High Tech, and 10% on 200 Billion Dollars of other goods. These payments are partially responsible for our great economic results. The 10% will go up to 25% on Friday. 325 Billions Dollars….

….of additional goods sent to us by China remain untaxed, but will be shortly, at a rate of 25%. The Tariffs paid to the USA have had little impact on product cost, mostly borne by China. The Trade Deal with China continues, but too slowly, as they attempt to renegotiate. No!

“The move marked a major escalation in trade tensions between the world’s two largest economies and a shift in tone from Trump, who cited progress in talks as recently as Friday.”

The article explained that, “A less than rosy update from United States Trade Representative Robert Lighthizer, including details that China was pulling back from some commitments it made previously, prompted Trump’s decision and jab on Twitter at Beijing, officials said.” 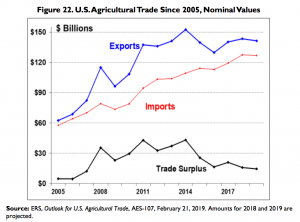 Mason and Shepardson noted that, “Trump said tariffs on $200 billion of goods would increase to 25 percent on Friday from 10 percent, reversing a decision he made in February to keep them at the 10 percent rate after progress between the two sides.

“The president also said he would target a further $325 billion of Chinese goods with 25 percent tariffs ‘shortly,’ essentially targeting all products imported to the United States from China.”

Trump acted out of frustration over Chinese resistance to some of his most far-reaching demands, according to several analysts following the negotiations.

“For their part, Chinese officials are insisting that the U.S. remove all of the tariffs that Trump imposed last year as part of any deal — a demand that the president so far is refusing,” the Post article said.

James Politi and Courtney Weaver reported at The Financial Times Online on Sunday that, “Among the biggest sticking points in the talks is the fate of existing US tariffs on Chinese goods, which Beijing would like to see completely erased but Washington would like to retain in part so that it can keep pressure on China to comply with the deal.” 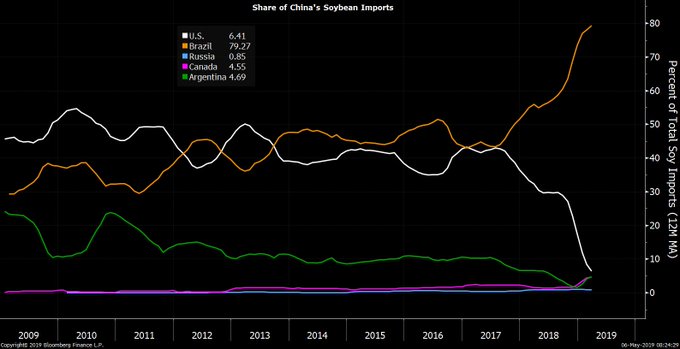 Also Sunday, New York Times writer Ana Swanson and Keith Bradsher reported that, “But it remains to be seen whether Mr. Trump’s threat will produce a beneficial trade agreement for the United States — or whether his attempts to pressure China will backfire by pushing already-tense relations past the breaking point. While the United States believes it has leverage over China, huge swaths of the American economy depend on access to the Chinese market for materials, products and sales.” 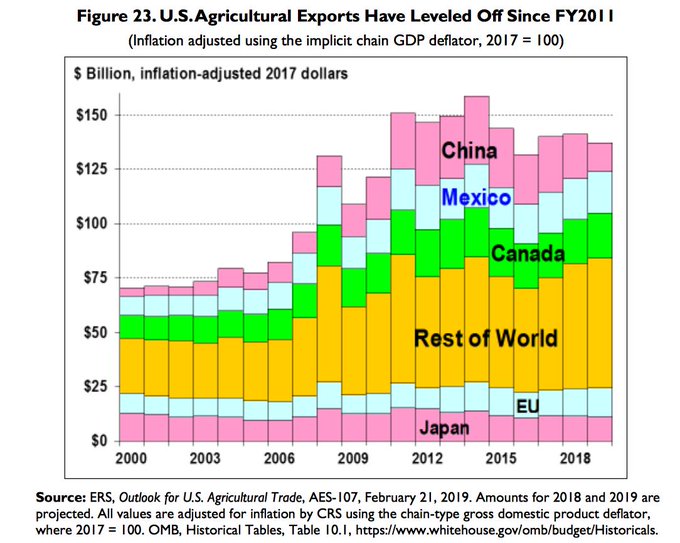 On Monday, Bloomberg writers Jenny Leonard, Saleha Mohsin, and Jennifer Jacobs reported that, “Donald Trump’s top trade negotiator told him that Beijing was back-tracking on a trade deal following a round of talks last week, angering the president and leading him to threaten on Sunday to raise tariffs on Chinese goods, according to people familiar with the matter.

“In talks last week in Beijing, Chinese officials told their U.S. counterparts they would not agree to a trade deal that required changes to Chinese law, the people said. China had previously agreed to change its laws in the text of the deal, they said.”

CHART OF THE DAY: Soybean prices in Chicago at a 11-year low on a front-month continuation chart After Trump’s tweet threatening #China with a deeper trader war | #OATT

The Bloomberg article noted that, “The U.S. side, led by Trade Representative Robert Lighthizer, thought that issues around what’s known as forced technology transfer were resolved and considered the Chinese position on changing its laws to be an attempt to renegotiate, the people said. Lighthizer was angered by the move and briefed Trump.”

Words (and tweets) have consequences, and it’s the rural economy that pays the price. 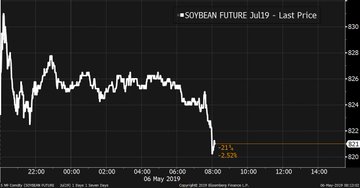 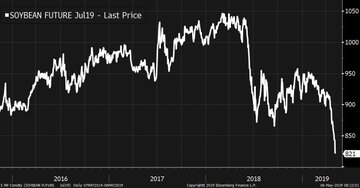 July soybean futures capped a seventh straight loss as the contract slumped to a record. Soy has been one of the hardest hit commodities by the trade war as China, the world’s top consumer, snubbed American imports.

Hirtzer and Parker indicated that, “The bad weather that farmers are facing is a double blow, according to Scott Irwin, an agricultural economist at the University of Illinois in Urbana-Champaign. Not only are they unable to plant, he said, but this leaves them more time to stew on the current conditions from trade to the overall downturn, Irwin said.

“Recent news reports on the U.S.-China trade talks had led many farmers to believe a resolution might be near. ‘The sense in farm country was ‘my gosh we’re finally going to get out of this nightmare’,’ he said. ‘And then boom.’

It’s ‘like a bad version of the movie ‘Groundhog Day’ for the U.S. farmer,’ Irwin said.”

And Bloomberg writer Shawn Donnan reported on Monday that, “President Donald Trump’s top trade negotiator said the U.S. plans to raise tariffs on Chinese goods on Friday, accusing Beijing of backpedaling on commitments it made during negotiations.

“Still, the trade talks will continue and a Chinese delegation will visit Washington on Thursday and Friday, U.S. Trade Representative Robert Lighthizer told reporters Monday in Washington. Amid those discussions, the Trump administration plans to increase duties on Chinese imports at 12:01 a.m. on May 10, he said.

“‘We felt we were on track to get somewhere. Over the course of last week we have seen an erosion of commitments by China. That in our view is unacceptable,’ Lighthizer said, adding that significant issues remain unresolved, including whether tariffs will remain in place.”

Mr. Donnan added that, “U.S. officials said they haven’t been in contact with Chinese Vice Premier Liu He in the past 24 hours. Liu, China’s top negotiator in the talks, was expected to attend this week’s discussions in Washington, but it wasn’t clear Monday if he would still lead the Chinese delegation.”