William Mauldin, Chao Deng and Vivian Salama reported in Saturday’s Wall Street Journal that, “The U.S. and China took an initial step to cement a trade agreement that had been derailed, with Washington saying on Friday it would shelve a planned increase in tariffs on goods imported from China, while Beijing would increase purchases of U.S. agricultural products.

“The two sides left many details to be worked out in the weeks or months ahead on tough issues including China’s enforcement of intellectual property rules, U.S. access to Chinese markets, Chinese government support for state-owned enterprises, and the fate of U.S. tariffs on nearly $360 billion worth of Chinese imports already in place.” 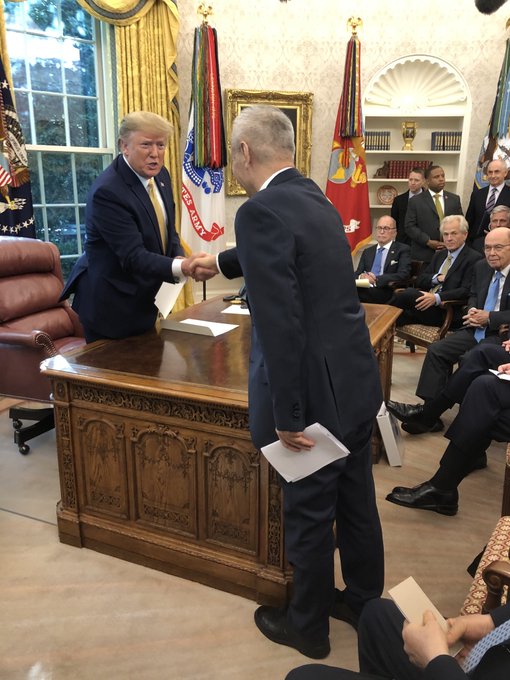 The Journal writes explained that, “The rough framework hashed out in two days of talks between senior U.S. and Chinese officials in Washington included a Chinese agreement to purchase American farm products totaling $40 billion to $50 billion, President Trump said, without specifying over what time period that would occur.”

The Journal article added that,

The details of the agriculture deal are rough. If China increases purchases of U.S. agricultural goods by $40 billion to $50 billion in a year, that would mark substantial gains. In 2017, before the trade war started, China purchased about $24 billion a year of U.S. food and agricultural exports. If the promised sum is spread out over some longer period of time, it is less significant.

Ana Swanson reported in Saturday’s New York Times that, “If completed, the agreement would provide relief to American farmers and businesses that have been battered by the trade war. Mr. Trump said the ‘substantial’ agreement would involve China buying $40 billion to $50 billion worth of American agricultural products annually, along with guidelines on how it manages its currency, the renminbi.” 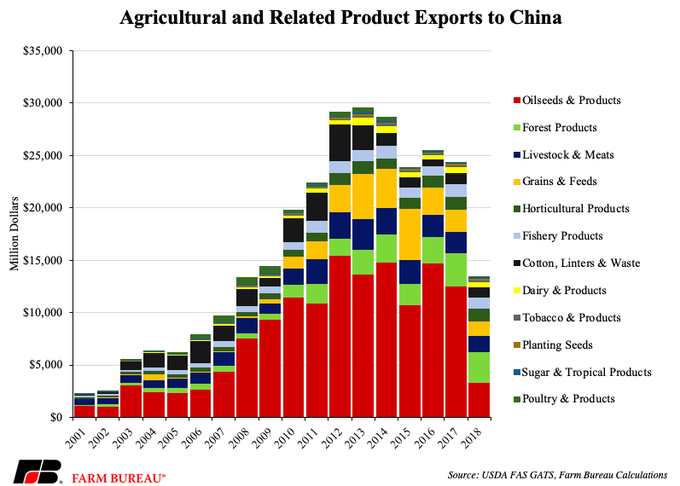 Writing on the front page of Saturday’s Washington Post, David J. Lynch reported that, “The first steps include an increase in Chinese agricultural purchases, good news for American farmers who have lost billions of dollars in sales during the trade war. China recently began stepping up orders of U.S. farm products as a deal neared. But exports of U.S. soybeans to China fell from $12.2 billion in 2018 to just $3.1 billion last year, according to the U.S. Census Bureau.”

The deal I just made with China is, by far, the greatest and biggest deal ever made for our Great Patriot Farmers in the history of our Country. In fact, there is a question as to whether or not this much product can be produced? Our farmers will figure it out. Thank you China! 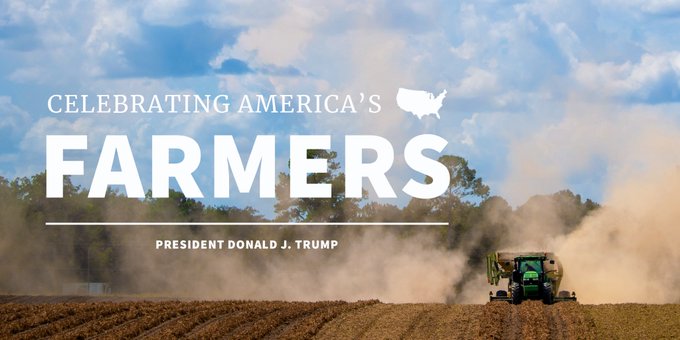 ‘This agreement seemingly does nothing to address the crippling tariffs farmers currently face. The promise of additional ag purchases is welcome news but details on timeline, price, commodities and many other questions will have to be answered,’ said Brian Kuehl, of Farmers For Free Trade.

Don Lee reported in Saturday’s Los Angeles Times that, “Trump said China had agreed to boost U.S. agricultural purchases to $40 billion to $50 billion, from an annual high of $16 billion. He said half-jokingly that American farmers are going to have to ‘immediately buy more land and get bigger tractors.’

“But it wasn’t clear over what time period the Chinese would make those imports or even whether China had the capacity to boost purchases by that much. There was nothing in writing issued Friday, and [China’s top trade envoy, Vice Premier Liu He], who spoke briefly after meeting with Trump, provided no specifics about farm purchases or any part of the agreement, saying only that ‘we have made substantial progress in many fields.’”

Today’s phase one trade agreement w/ China includes $40 to $50 billion in purchases of U.S. #agriculture goods – this is welcome news for our farmers & ranchers and we appreciate the President’s efforts to advance this first phase.

I’m glad the administration is making positive progress on a trade deal with China. No new tariffs on goods plus additional purchases of agricultural products, like #Iowa soybeans and pork, is a good sign.

I look forward to learning more details about this phase of the deal. I’ll continue fighting on behalf of Iowans to ensure we’re getting a good, fair deal for folks in our state and across the country.

“But some said they wanted more specifics from the White House, citing other times over the past year when expected relief from trade tensions failed to materialize.

‘All of these things are positive,’ said Grant Kimberley, director of market development for the Iowa Soybean Association. ‘But there’s a whole lot of details that have to get worked out. Certainly, this is not a final deal. We have seen this before.’

“Kimberley said Iowa soybean farmers need Chinese buyers during their coming harvest. A delay until the winter or spring — when China buys its soybeans from South America — could be too late for some farmers.” 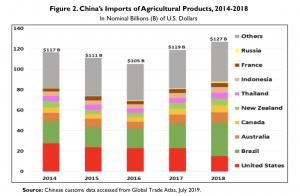 Bloomberg’s Shawn Donnan pointed out on Friday that, “The surge in Chinese purchases of U.S. farm products that is the biggest win for Trump in the agreement unveiled Friday is one that was first offered by Beijing more than two years ago.” 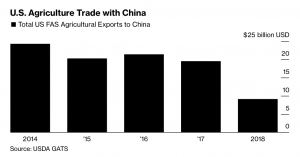 Bloomberg writers Isis Almeida and Josh Wingrove reported on Friday that, “The spending levels suggests ‘that they may plan on buying a lot of U.S. pork, along with the soybeans they need, as well as corn and ethanol,’ said Arlan Suderman, chief commodities economist at INTL FCStone Inc.”

Market watchers also pointed to the need to know about tonnage-commitments. Earlier this week, Chinese officials had discussed offering to buy total U.S. soybean volumes that could exceed 30 million tons, according to people familiar with the situation. Before the trade war, the Asian country bought 30 million to 35 million tons of soybeans in a normal year.

Also Friday, Michael Hirtzer and Isis Almeida reported at Bloomberg that, “Soybean futures jumped to the highest in more than three months, while corn extended gains, on news that the U.S. and China reached a partial agreement in the trade war that could lay the groundwork for a broader deal.” 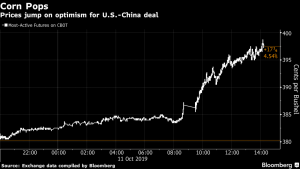 And Reuters writers Tom Polansek and Karl Plume reported on Friday that, “U.S. soybean prices climbed to the highest point since the start of the trade war ahead of the announcement on Friday. Trump said it will take up to five weeks to get a written agreement.”

Polansek and Plume pointed out that, “China imported more than 13 million tonnes of U.S. soy in the 2018/19 marketing year that ended Aug. 31 and has bought nearly 5 million tonnes more in the current season, according to government data. The sales were far short of the 30 million tonnes or more that China imported annually from the United States before the trade war.”