Financial Times writer James Politi reported last week that, “US President Donald Trump’s trade chief has warned that negotiations to end the tariff war with China were at risk of failing, saying ‘major, major issues’ needed to be resolved before an agreement was reached, and he could not ‘predict success at this point.’

“Speaking before the Senate finance committee on Tuesday, Robert Lighthizer, the US trade representative, said that talks with Beijing had intensified and probably entered their ‘final weeks,’ as the two countries haggle over structural reforms and enforcement provisions. But Mr Lighthizer indicated that a deal could not be taken for granted.

‘We’re either going to have a good result or we’re going to have a bad result before too long, but I’m not setting a specific timeframe and it’s not up to me,’ Mr Lighthizer said. ‘I’ll work as hard as I can, and the president will tell me when the time is up, or the Chinese will,’ he added.

The FT article explained that, “Among the major sticking points is a US demand for strict enforcement provisions to ensure that China lives up to its commitments in the deal, including the right to impose new tariffs on Beijing unilaterally if Washington judges that the pact has been flouted.” 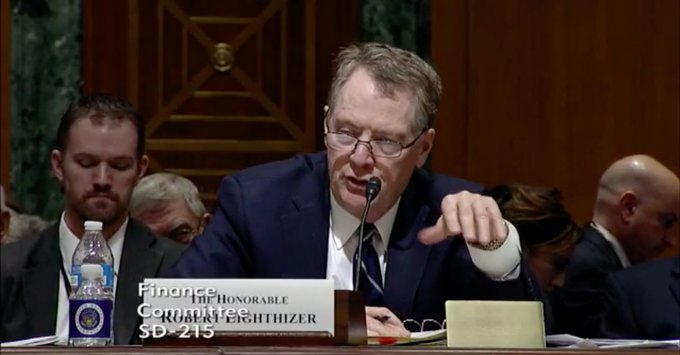 New York Times writer Alan Rappeport also reported on Ambassador Lightihizer’s testimony from Tuesday, and indicated that, “His comments contrasted sharply with Mr. Trump’s more optimistic take last month, when he said that ‘significant progress’ had been made in resolving the yearlong trade war with China and that he would not raise tariffs on Chinese goods. Mr. Trump predicted that he would soon meet with President Xi Jinping of China for a signing ceremony at Mar-a-Lago, the president’s Florida resort.

“But administration officials have since become less sanguine about the potential for a quick deal, and Mr. Trump has indicated that he is prepared to ‘walk’ from a deal if it is not in the United States’ interest.”

Also with respect to Tuesday’s hearing, Reuters writers David Lawder, Humeyra Pamuk and Alexandra Alper reported that, “The United States is working toward a deal that would eliminate the steel and aluminum levies and give Canada and Mexico access to the U.S. market while maintaining benefits of the tariff program, Lighthizer said, highlighting quotas as a way to do that.”

The Reuters article added that, “Lighthizer said the United States is at a ‘complete stalemate‘ with EU negotiators over agricultural access.”

Meanwhile, Reuters writers Steve Holland and Jeff Mason reported last week that, “U.S. President Donald Trump said on Wednesday he was in no rush to complete a trade pact with China and insisted that any deal include protection for intellectual property, a major sticking point between the two sides during months of negotiations.”

And Associated Press writer Kevin Freking reported on Wednesday that,

Farmers are anxious for the president to work out an agreement with China as well as for Congress to ratify a new trade agreement with Canada and Mexico to replace the North American Free Trade Agreement.

Mark Ash and Mariana Matias indicated in the March Oil Crops Outlook report from USDA’s Economic Research Service that, “In February, U.S. export inspections of soybeans stabilized at 161 million bushels compared to 164 million in January. Nearly half of the February shipments were to China. Between December 2018 and February 2019, U.S. sales to China resumed after a 6-month stoppage. As of February 28, U.S. export sales commitments of soybeans to China totaled 9.4 million metric tons. On November 29, sales to China totaled only 515,000 tons.

The U.S. market is drawing support from the possibility of further Chinese sales amid ongoing bilateral government discussions.

“Crop losses in Brazil are also stimulating more interest in U.S. soybean supplies. Nevertheless, USDA’s forecast of 2018/19 soybean exports is unchanged at 1.875 billion bushels. The outlook for season-ending stocks is trimmed to 900 million bushels based solely on a change in the soybean crush forecast.”

Ash and Matias added that, “Export market developments are reflected in a modest rally for soybean prices. Since November, prices paid by Decatur, Illinois soybean processors have edged up from $8.46 per bushel to a February average of $8.84 per bushel. Likewise, the U.S. Gulf price strengthened to $9.42 per bushel in February from the Novemberaverage of $8.99. More time is needed to determine whether a higher price level can be sustained. Later this month, U.S. farmers are likely to influence the price trend when their 2019 planting intentions are known. USDA left its 2018/19 price forecasts for soybeans and soybean meal unchanged this month.” 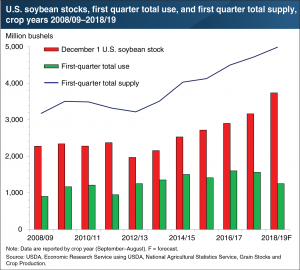 “USDA’s latest Grain Stocks report indicates that U.S. soybean stocks were at an all-time high of 3.736 billion bushels in December 2018 as the first-quarter of the 2018/19 crop year (September–August) ended…The deficit is primarily related to the steep decline in trade with China, despite a few recent sales to state-owned companies there.” (December U.S. soybean stocks climbed to a record high in 2018, USDA-ERS (March 14, 2019)).

Reuters writer Mark Weinraub reported Wednesday that, “U.S. farmers are gearing up to plant what could be their third-largest soybean crop ever despite failing to sell a mountain of beans from their last harvest due to a U.S.-China trade war that remains unresolved.

“Soybeans were the single most valuable U.S. agricultural export crop and until the trade war, China bought $12 billion-worth a year from American farmers.” 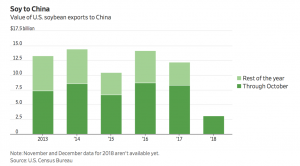 Mr. Weinraub noted that, “As winter ends and farmers begin planting, they will continue to plant soy despite uncertainty over whether they will be able to sell beans to China later this year. There are simply no better options, farmers say. ”

Last week’s article explained that, “One alternative, sorghum, was also dragged into the trade war. Farmers also could increase their corn acreage but the corn-based ethanol industry is struggling. Additionally, farmers who plant corn on the same fields two years in a row need to buy extra fertilizer and fuel.

“Alternative niche crops such as hemp are expensive to start growing and have limited markets.” 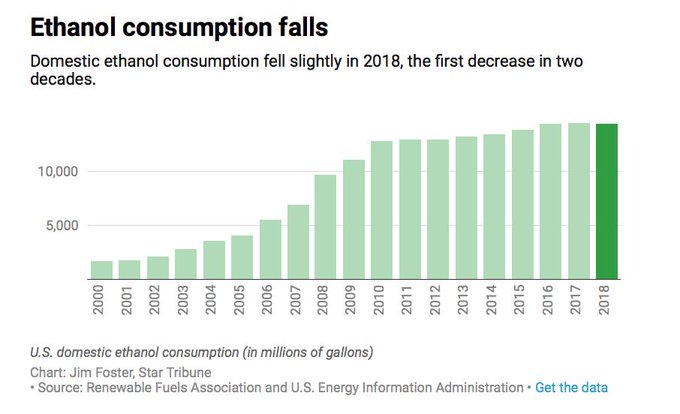 The Reuters article stated that, “But many farmers are convinced China will have to return to the U.S. market because even if it succeeds in reducing soymeal demand as Chinese demand for soybeans has more than tripled in the past 15 years.

“And Beijing has promised 10 million more tonnes of goodwill purchases as part of the trade negotiations, U.S. officials have said.”

In an article discussing variables impacting Chines soybean demand, Huileng Tan reported Tuesday at CNBC Online that, “But while Beijing has pledged to buy more American soybeans, analysts question if China — the world’s largest consumer of the oilseed — has the appetite for it.

“In addition to tariffs brought on by the ongoing trade dispute, falling import numbers and an outbreak of African swine fever in China have added to concerns that the world’s second largest economy may not be able to live up to its pledges to buy more.”

On the other hand, swine reductions in China could be positive news for U.S. pork producers.

“The sales were the biggest to China since April 2017 and the third largest since the USDA began tracking pork export sales in 2013,” the Reuters article said. 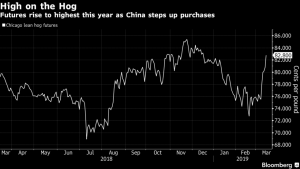 Bloomberg writer Michael Hirtzer reported Thursday that, “[China] bought 23,800 metric tons in the week ending March 7, the largest sale since late April 2017 and the third biggest in data going back to 2013, the Department of Agriculture reported Thursday. Lean hog futures for June delivery surged as much as 3.4 percent to 83.6 cents a pound on Thursday, the highest for the contract since Dec. 14.”