News articles this week reported that a trade deal between the U.S. and China could be close.  Meanwhile, Secretary of State Mike Pompeo provided additional trade perspective while visiting Iowa on Monday.  Today’s update looks at these developments in more detail.

Trade Deal Could be Nearing

Lingling Wei and Bob Davis reported on the front page of Monday’s Wall Street Journal that, “China and the U.S. are in the final stage of completing a trade deal, with Beijing offering to lower tariffs and other restrictions on American farm, chemical, auto and other products and Washington considering removing most, if not all, sanctions levied against Chinese products since last year.

“The agreement is taking shape following February’s talks in Washington, people briefed on the matter on both sides said. They cautioned that hurdles remain, and each side faces possible resistance at home that the terms are too favorable to the other side.

Despite the remaining hurdles, the talks have progressed to the extent that a formal agreement could be reached at a summit between President Trump and Chinese President Xi Jinping, probably around March 27, after Mr. Xi finishes a trip to Italy and France, individuals with knowledge of the plans said.

The Journal writers added that, “In recent talks, Beijing has also discussed reducing tariffs and other barriers that have limited the sale of American-made chemicals and agricultural products, such as ethanol, which now face 70% Chinese retaliatory tariffs; an ethanol byproduct, dried distillers grains, which is used to feed cattle; and polysilicon, a raw material in solar panels that was hit with 57% tariffs as part of an earlier trade fight with China.” 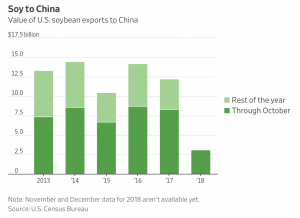 Also this week, New York Times writers Ana Swanson and Keith Bradsher reported that, “The Trump administration is close to a trade deal with China that would roll back tariffs on both sides of the Pacific but may do little to achieve the substantive changes to China’s economy that the United States initially set out to win, people with knowledge of the talks said.

“Significant details remain unsettled and the deal is still being discussed but so far, the two sides have agreed on a pact that would largely require Beijing to make big purchases of American agricultural and energy goods and to lower some barriers that prevent American companies from operating in China. In return, the United States would most likely drop its tariffs on at least $200 billion of the $250 billion worth of Chinese imports currently subject to American levies.”

“As part of the agreement, the Trump administration has been pushing China to accept an enforcement mechanism that would enable the United States to quickly reinstate tariffs if Beijing fails to live up to specific promises,” the Times article said.

Meanwhile, Bloomberg writer Jenny Leonard reported Monday that, “The world’s two largest economies are nearing the finish line on a trade deal that could be signed by President Donald Trump and his Chinese counterpart Xi Jinping as early as this month. But that doesn’t mean the trade war ends.

“More work remains on a deal that will ensure that Beijing will follow through on its commitments, U.S. Trade Representative Robert Lighthizer told Congress last week. Days later, Trump warned he can still walk out on China like he did with North Korean leader Kim Jong Un at their summit over a nuclear deal in Vietnam.”

The Bloomberg article reminded readers that, “Trump on Friday asked China to immediately remove all tariffs on U.S. agriculture, though he didn’t indicate if his demand was limited to retaliatory duties or more far-reaching.”

“On Monday, Pompeo declined to say when Iowa farmers might see relief from the tariffs.” 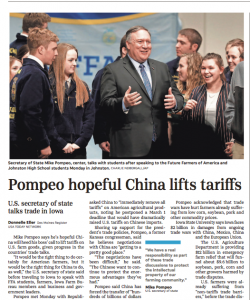 The Register article noted that, “‘I wouldn’t want to predict a day or a week’ when the deal might come together, Pompeo told about 300 farm leaders who came to hear Pompeo speak Monday at the World Food Prize headquarters in Des Moines.

“John Maxwell, an eastern Iowa dairy producer, told Pompeo: ‘Every day that marches on, it gets tougher and tougher.’” 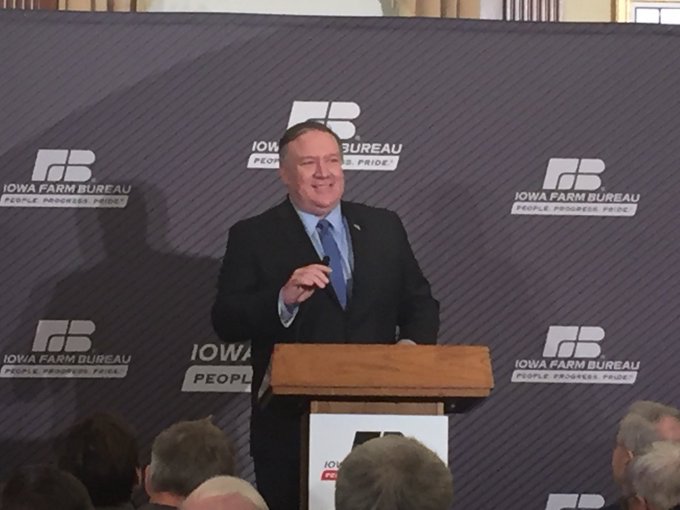 Pompeo, speaking in Iowa, said the Trump admin is making progress on a China trade deal but nothing to announce today.

He said he thinks China will lift tariffs on U.S. agricultural products.

“Shoring up support for the president’s trade policies, Pompeo, the former Kansas congressman, said he believes negotiations with China are ‘getting to a pretty good place,’” the article said. 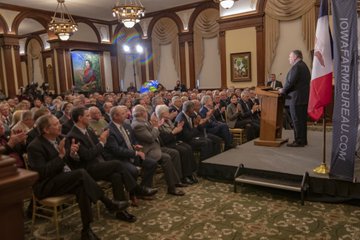 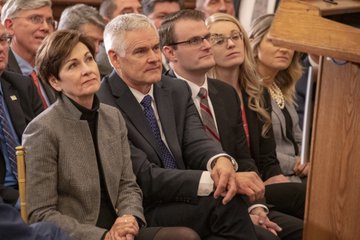 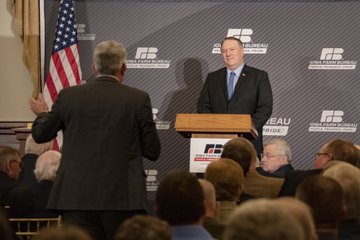 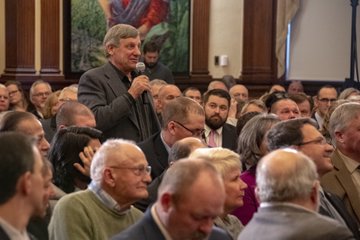 U.S. agricultural innovation & our relationship with China are intertwined. From stopping IP theft to fighting for greater market access, @StateDept will advocate for the fairness and reciprocity you deserve. American farmers feed the world and we support you. #StateDeptStateside

‘The agriculture industry is a high-tech industry,’ Pompeo said. ‘We have a real responsibility as part of these trade discussions to protect the intellectual property of our farming community.’

DTN Ag Policy Editor Chris Clayton reported Monday that, “The secretary of state didn’t share many specifics on trade talks with China, but reiterated the Trump Administration’s case why the trade talks were needed even if the resulting tariffs led to lower market prices and export sales for U.S. farmers in the short term. While the secretary largely avoided domestic politics in his talk, the trip to Iowa could be viewed as trying to shore up support with farmers, a favorite constituency of President Donald Trump.”

The DTN article pointed out that, “‘This risk of retaliatory tariffs — you’ve seen it in pork and we’ve seen it in other places — is real,’ Pompeo said. ‘The president is deeply aware of this, the trade teams are all aware.’ He added, ‘We’re working to clean up all of these issues along the side of that. I hesitate to get too far ahead of myself, but I’m optimistic we’ll get resolution and pull back some of these retaliatory tariffs.’”

Mr. Clayton indicated that, “Pompeo also told farmers he was confident there were enough votes in Congress to pass the USMCA. In the end, officials in Canada and Mexico will also see that ratifying the new trade deal is the best outcome, he said. Pompeo said it ‘remains to be seen’ how the Trump Administration will unwind the Section 232 tariffs on steel and aluminum, but he reiterated confidence on the USMCA.” 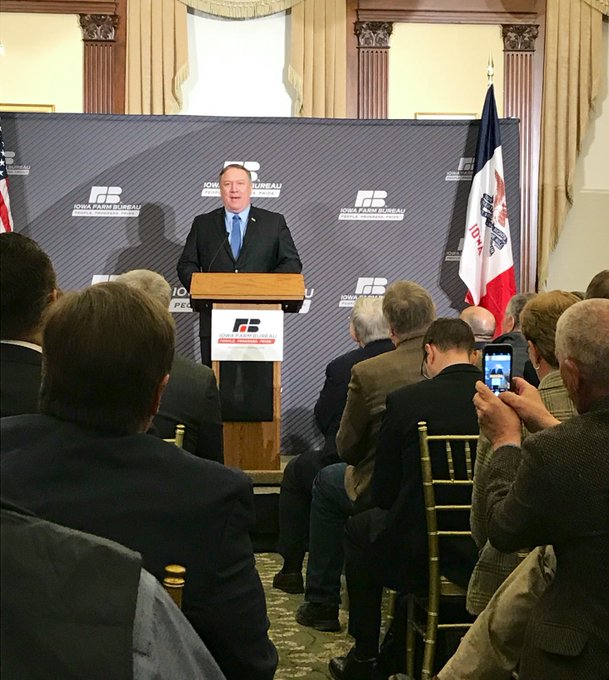 A warm #Iowa welcome to @SecPompeo! Glad to have him in the state today discussing our relationship with China. I’m hopeful we’re close to a trade deal—one that reopens trade for Iowa farmers and manufacturers, while also holding China accountable.

And Associated Press writer David Pitt reported Monday that, ” U.S. Secretary of State Mike Pompeo was on a trade mission Monday to persuade Iowa farmers struggling to survive low commodity prices and tariffs that have hurt sales to stand firm with President Donald Trump and his efforts to negotiate better trade deals.”

Mr. Pitt noted that, “[U.S. Ambassador to China and former Iowa Gov. Terry Branstad] said he believes progress had been made recently with China and a deal could be near but he acknowledged farmers want a resolution.

“‘Iowa farmers take the long view of things. I think Iowa farmers want to see something long-lasting and permanent and not something that’s just going to be short term,’ he said.

Also, Reuters writer Susan Heavey reported Tuesday that, “U.S. President Trump will reject a U.S.-China trade deal that is not perfect, but the United States would still keep working on an agreement, U.S. Secretary of State Mike Pompeo said in a media interview.

“‘Things are in a good place, but it’s got to be right,’ Pompeo told Sinclair Broadcasting Group, according to a transcript released by the State Department on Tuesday.”

The Reuters article stated that, “Asked if Trump would walk away from any deal that was not perfect, Pompeo said, ‘Yes’ and pointed to the Republican president’s rejection of an agreement with North Korea at a summit last week in Hanoi.

“Trump last week said that he was willing to abandon trade talks with China, but U.S. advisers in recent days have signaled more positive outcomes.”