U.S. Trade Representative Robert Lighthizer and Treasury Secretary Steven Mnuchin are scheduled to travel to China next week to start a new round of face-to-face trade talks.  As the negotiations continue, many Corn Belt producers face substantial financial losses due to flooding in the Midwest.  The ongoing trade uncertainty and flooding come at time when the agricultural economy is struggling to rebound from its peak in 2013.

Bloomberg writer Isis Almeida reported on Monday that, “China has offered the U.S. some ‘very attractive numbers’ for purchases of farm goods as part of ‘dynamic’ trade talks, but there are still concerns over areas such as biotechnology, according to U.S. Agriculture Secretary Sonny Perdue.

“While parts of the agriculture deal are done, the U.S. is still ironing out details including how commitments will be enforced and implemented, he told reporters at the National Grain and Feed Association’s annual convention in Amelia Island, Florida.

The U.S. is concerned about setting up a framework that would allow agriculture biotech innovations to flow into China in the future without being curbed by non-tariff barriers, he said.

The Bloomberg article added: “‘China has laid on the table some very attractive numbers regarding ag purchases, but there again, we are still in the negotiation phase, and I don’t want to raise expectations if we are not able to come to an agreement,’ Perdue said, declining to comment on the value of purchases. ‘We are still concerned over some biotech issues.’” 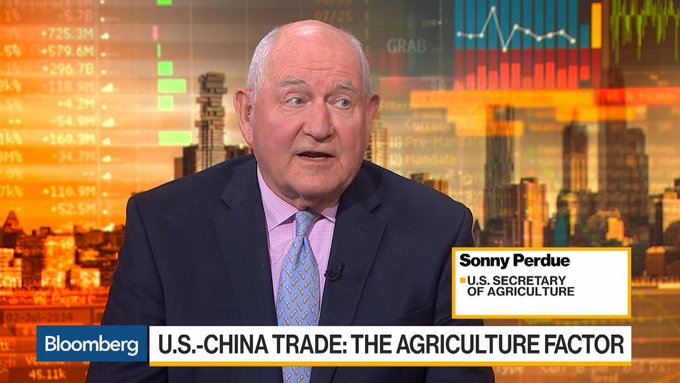 When should we expect a U.S.-China trade deal?

Meanwhile, Bloomberg writers Jenny Leonard, Saleha Mohsin, and Jennifer Jacobs reported on Tuesday that, “Some U.S. negotiators are concerned that China is pushing back against American demands in trade talks, according to people familiar with the negotiations, even as President Donald Trump sounded optimistic about reaching a deal that could boost his reelection chances.

“Chinese officials have shifted their stance because after agreeing to changes to their intellectual-property policies, they haven’t received assurances from the Trump administration that tariffs imposed on their exports would be lifted, two of the people said on condition of anonymity.” 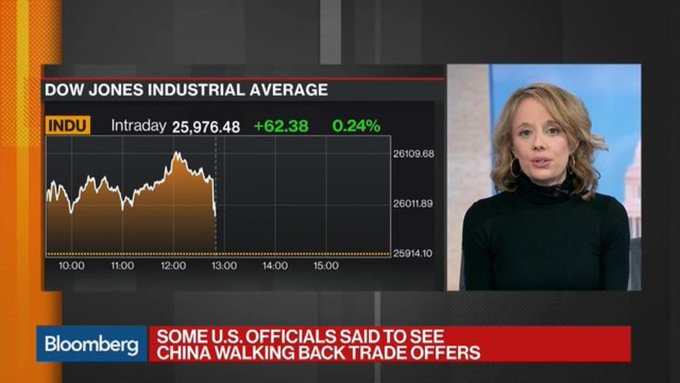 “While some American officials see China’s strategy as backpedaling on commitments, others were less concerned saying it was a normal part of the negotiation process,” the article said.

Also Tuesday, Wall Street Journal writer Bob Davis reported that, “Negotiators for the U.S. and China have scheduled a new round of high-level trade talks in Beijing and Washington, aiming to close a deal by late April to end the yearlong dispute between the world’s two largest economies.

People tracking the negotiations said the talks appear to be in their final stages, following a rocky patch after Chinese leaders were unnerved by President Trump’s decision to abruptly break off nuclear-disarmament talks with North Korean leader Kim Jong Un in February.

Financial Times writer James Politi reported Tuesday that, “The US and China have been haggling over the enforcement of a possible trade deal, the fate of existing tariffs on Chinese goods, the scale of purchases of US goods by the Chinese, the depth of Chinese concessions on structural reforms on industrial subsidies and the protection of US intellectual property.” 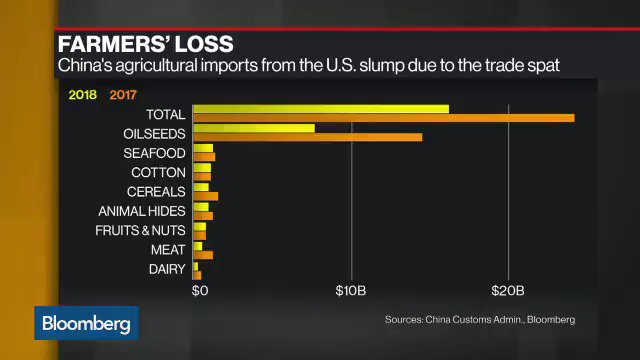 A substantial increase in China’s purchasing of U.S. soybeans would make “an enormous difference for the rural and agricultural economy,” according to CoBank CEO Tom Halverson https://bloom.bg/2JkNB9S

And Reuters writers David Lawder and Roberta Rampton pointed out Tuesday that, “Since Trump’s delay of the March 1 tariff hike, the two sides have only negotiated by telephone and video link.”

On Wednesday, Wall Street Journal writers Bob Davis and Rebecca Ballhaus reported that, “With the U.S. and China preparing for a fresh round of face-to-face negotiations, President Trump said the U.S. expected to keep tariffs on Chinese goods in place for a ‘substantial period of time,’ even after a deal.

“‘We have to make sure that if we do the deal with China that China lives by the deal,’ Mr. Trump told reporters as he left Washington for Ohio. Administration officials have talked of removing tariffs in stages, as Beijing shows that it has carried out parts of a deal—and reimposing them if China later backtracks.”

This is madness. I cannot stress enough how much this policy hurts our farmers. Ag producers cannot afford this trade war to continue for a “substantial period of time.”
Jennifer Jacobs

BREAKING: Trump says he won’t lift US tariffs on China goods even after he has reached a deal with Xi.

“We’re talking about leaving them,” he told me. “For a substantial period of time. Because we have to make sure that if we do the deal with China that China lives by the deal.“ 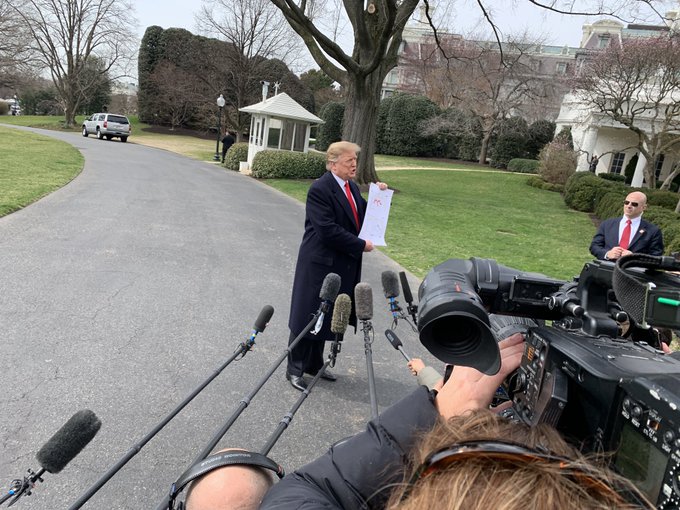 Bloomberg writers Jennifer Jacobs and Andrew Mayeda reported Wednesday that, “The president’s comments dim hopes that round-the-clock trade negotiations between the world’s two biggest economies could lead to them removing the roughly $360 billion in tariffs they’ve imposed on each other’s imports. Beijing has pushed the Trump administration to remove tariffs as part of any deal.”

“Despite his comments on the tariffs, Trump said ‘the deal is coming along nicely,’ adding that top U.S. negotiators leave for China this weekend for talks on an agreement,” the Bloomberg article said.

New York Times writers Mitch Smith, Jack Healy and Timothy Williams reported on the front page of Monday’s New York Times that, “The record floods that have pummeled the Midwest are inflicting a devastating toll on farmers and ranchers at a moment when they can least afford it, raising fears that this natural disaster will become a breaking point for farms weighed down by falling incomes, rising bankruptcies and the fallout from President Trump’s trade policies.”

Farms filing for Chapter 12 bankruptcy protection rose by 19 percent last year across the Midwest, the highest level in a decade, according to data compiled by the American Farm Bureau. Now, many of those farmers have lost their livestock and livelihoods

In addition, Reuters writers Humeyra Pamuk, P.J. Huffstutter, and Tom Polansek reported Wednesday that, “Midwestern farmers have been gambling they could ride out the U.S.-China trade war by storing their corn and soybeans anywhere they could – in bins, plastic tubes, in barns or even outside.

“Now, the unthinkable has happened. Record floods have devastated a wide swath of the Farm Belt across Iowa, Nebraska, South Dakota and several other states. Early estimates of lost crops and livestock are approaching $1 billion in Nebraska alone. With more flooding expected, damages are expected to climb much higher for the region.”

Iowa Gov Kim Reynolds talked to the White House today about flooding there — including damage to grain in storage.

Farmers had big supplies of corn and soybeans in storage, partly because of ongoing trade war.

My team is staying in close contact with Governor Kim Reynolds (@IAGovernor) of Iowa and the local officials managing these floods. We support you and thank all of the first responders working long hours to help the great people of Iowa! https://twitter.com/iagovernor/status/1107698956295983105 …

“The deluge is the latest blow for the Farm Belt, which has faced several crises in the last five years, as farm incomes have fallen by more than 50 percent due to a global grain glut. President Donald Trump’s trade policies cut off exports of soybeans and other products, making the situation worse,” the Reuters article said.

Bloomberg writer Mario Parker reported Wednesday that, “The worst agricultural downturn since the 1980s is taking its toll on the emotional well-being of American farmers.

“In Kentucky, Montana and Florida, operators at Farm Aid’s hotline have seen a doubling of contacts for everything from financial counseling to crisis assistance. In Wisconsin, Dale Meyer has started holding monthly forums in the basement of his Loganville church following the suicide of a fellow parishioner, a farmer who’d fallen on hard times. In Minnesota, rural counselor Ted Matthews says he’s getting more and more calls.” 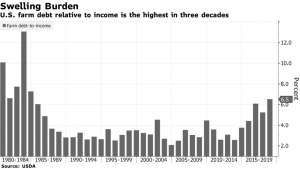 Mr. Parker explained that, “Glutted grain markets have sparked a years-long price slump made worse by a trade war with top buyer China. As their revenues decline, farmers have piled on record debt — to the tune of $427 billion. The industry’s debt-to-income ratio is the highest since the mid 1980s, when Willie Nelson, Neil Young and John Mellencamp organized the first Farm Aid concert.

“So dire are conditions in farm country that Senator Joni Ernst, an Iowa Republican, and Senator Tammy Baldwin, a Wisconsin Democrat, pushed for mental-health provisions to be included in the 2018 Farm Bill. The legislation allocated $50 million over five years to address the shortfall of such services in rural areas.”