Bloomberg writers Michael Hirtzer and Dominic Carey reported last week that, “The trade war between the U.S. and China continues to surprise agricultural markets, even delivering an unexpected reprieve for American farmers who have otherwise been roiled by the conflict.

“U.S. soybean exports have jumped to a seasonal record at a time of the year when shipments typically slow due to dwindling supplies ahead of the autumn harvest in the Northern Hemisphere. Curiously, the surge is being driven by cargoes being sent to China — a nation that’s largely shifted away from American soy to imports from Brazil over the past year.” 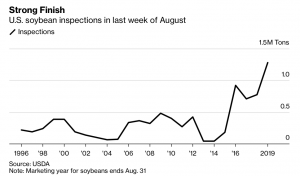 The Bloomberg writers explained that,

Brazil’s increased exports to China have thinned its own supplies, and that’s now forcing Beijing to take in American soybeans rather than canceling them in a bid to protect against Brazilian prices rising further or the U.S. crop falling short.

Also last week, Reuters writer Maximilian Heath reported that, “Argentine farmers, anxious about an increasingly murky political outlook and economic turmoil, are turning toward soy over more expensive corn to cut costs, a shift that could impact next season’s harvest in one of the world’s top grain exporters.” 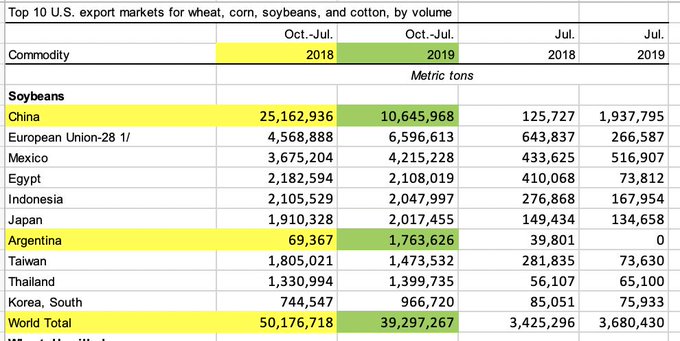 The Reuters article stated that, “The trend could weigh on Argentina’s 2019/20 corn harvest and bolster the output of soy, analysts said. The country – now at the start of the planting season – is the world’s top exporter of processed soy and the number three for corn exports, behind Brazil and the United States.”

And on Friday, Bloomberg writer Jonathan Gilbert reported that,

Argentina’s soybean crushers are hoping they will soon be able to export their animal feed to China for the first time.

“A Chinese customs delegation inspected plants along the Parana River last week, and the officials will now take about 30 days to produce a report that could pave the way for Argentina to export soy meal — used as animal and fish feed — to the Asian giant, Gustavo Idigoras, head of crop export and crushing chamber Ciara-Cec, said in an interview. Ciara-Cec’s members include agricultural trading heavyweights Bunge Ltd., Cargill Inc. and Louis Dreyfus Co.”

Mr. Gilbert pointed out that, “Argentina doesn’t currently export soy meal to China, which prefers to buy raw beans and crush them itself to spur industry at home. The Asian country is importing more of those raw beans from Argentina, with purchases forecast to rise to 9 million metric tons this year from 3.3 million last year, Idigoras said.

“Approval of Argentine meal would likely be interpreted as a signal to U.S. President Donald Trump, whose trade war with Beijing has hurt America’s soy farmers. It would also come at a time when China is expanding its footprint in Latin America by developing infrastructure projects across Argentina, from hydroelectric plants to railways.” 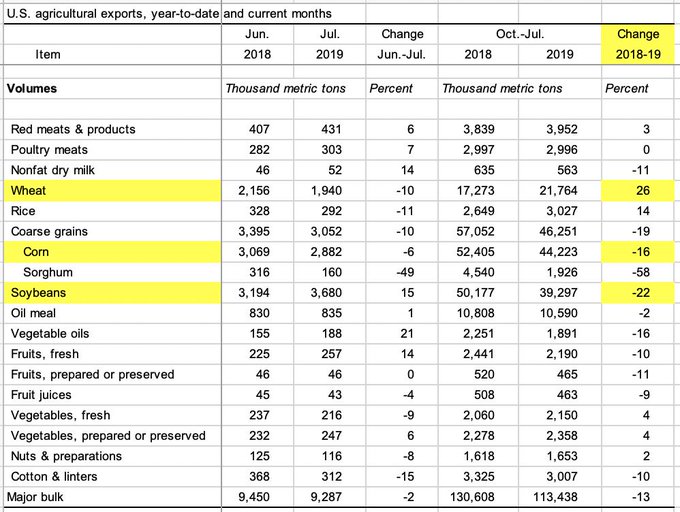 And with respect to Brazil, Reuters writer Marcelo Teixeira reported late last week that, “Planting of Brazil’s new soybean crop is about to start in most producing regions and output is expected to increase by 5.5% compared with the previous crop to a record 121.41 million tonnes, broker and consultancy INTL FCStone said on Thursday.

“It expects planting growth of 1.6% in the new cycle, which is smaller than growth rates in recent years, confirming a view from another forecaster this week.”

* So far, for Calendar Year 2019, the U.S. is running a deficit with respect to agricultural trade. 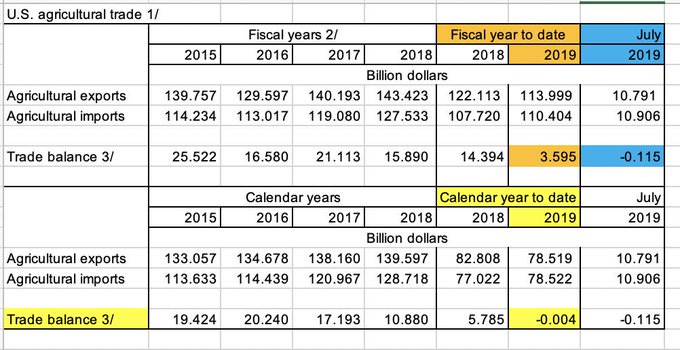 “They would be the first in-person, high-level discussions since a failed U.S.-China trade meeting at the end of July prompted U.S. President Donald Trump to proceed with fresh tariffs on virtually all remaining Chinese imports so far untouched by the trade war,” the Reuters article said. 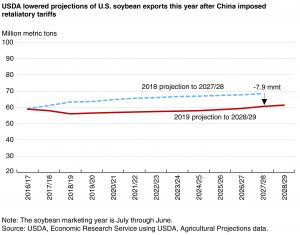 New York Times writer Alexandra Stevenson reported last week that, “The United States and China will hold trade talks in Washington early next month, officials from both countries said on Thursday, but new tariffs will make it difficult to find a way to end their economic clash.”

“Next month’s talks would be the 13th time that senior-level trade negotiators have met,” the Times’ article pointed out. 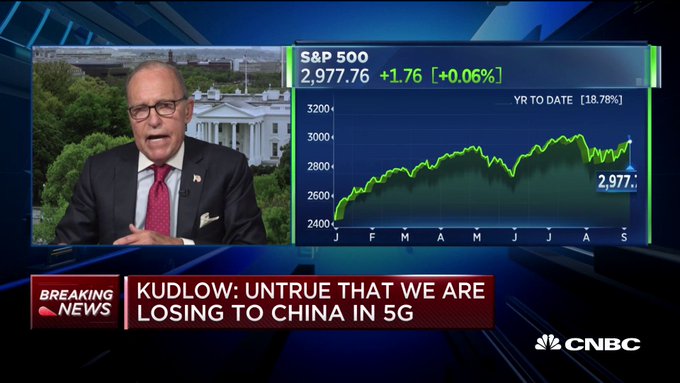 Reuters writers David Lawder and Roberta Rampton reported on Friday that, “White House economic adviser Larry Kudlow said on Friday the United States wants ‘near term’ results from U.S.-China trade talks in September and October but cautioned that the trade conflict could take years to resolve.

Lawder and Rampton indicated that, “The 14-month U.S.-China trade war has escalated sharply since May, when talks broke down after Beijing backtracked on earlier commitments to make changes in law to improve intellectual property protections, curb the forced transfer of U.S. technology to Chinese firms and improve U.S. access to Chinese markets.”

“Our economy is humming. The Chinese economy is not.” Larry Kudlow speaks about the state of U.S.-China trade talks with @FerroTV https://bloom.bg/2lBkhR0 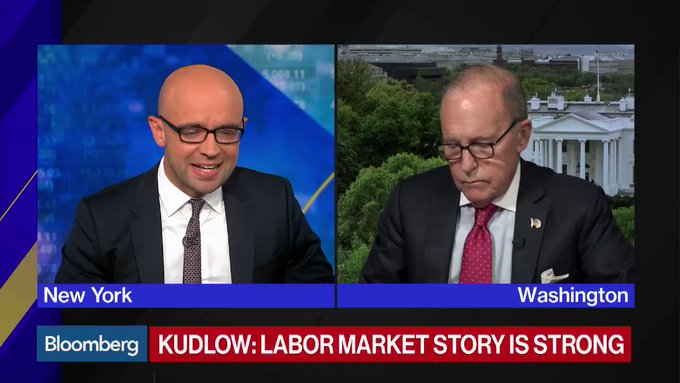 Friday’s article added that, “Kudlow told Bloomberg TV that he could not speculate on whether the September or October talks could delay a planned tariff increase on Oct. 1 to 30% from 25% on $250 billion worth of Chinese goods.”