Last week, Los Angeles Times writer Don Lee reported that, “The U.S.-China trade war took a dangerous turn for the worse Monday as Beijing allowed its currency to weaken and said it was halting new American farm purchases, sending U.S. stocks in a tailspin and heightening risks of a global economic downturn.

“The Chinese actions were seen as retaliation after President Trump last Thursday abruptly announced plans to impose new 10% tariffs next month on an additional $300 billion of Chinese goods, despite having declared a truce in late June.”

Nonetheless, Bloomberg writer Josh Wingrove reported on Tuesday that, “President Donald Trump’s top economic adviser, Larry Kudlow, said the U.S. still expects Chinese negotiators to come to Washington for another round of trade talks in September, even after the two nations escalated their trade war.

“The president has said, you know, if you make a good deal or good progress on a deal, maybe he’ll be flexible on the tariffs,” Trump’s top economic advisor @larry_kudlow said. “He’s open to it, that’s really the key point.” https://cnb.cx/2yJAU0d 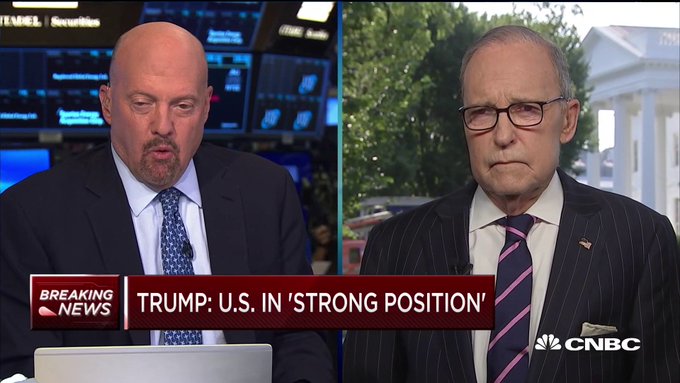 “‘The president and our team is planning for a Chinese visit in September,’ Kudlow said Tuesday on CNBC. ‘We’re willing to negotiate. Movement towards a good deal would be very positive and might change the tariff situation. But then again, it might not.’”

And Wall Street Journal writers Chao Deng and Chun Han Wong reported last week that, “Both governments have left some room for negotiations. The U.S. wants China to ramp up purchases of agricultural goods to relieve the trade war’s impact on farmers. Beijing, for its part, wants the Trump administration to relax restrictions on transfers of American technology to Huawei Technologies Co. Though those concessions failed to materialize in talks last week, the two sides agreed to a negotiating session in Washington in September. President Trump could put his newest tariffs on hold before the Sept. 1 effective date, and the yuan could strengthen.”

U.S. soybean farmers are facing an uncertain future, caught between a production crisis and imploding demand from the U.S.-China trade war. Insights via @CMEGroup 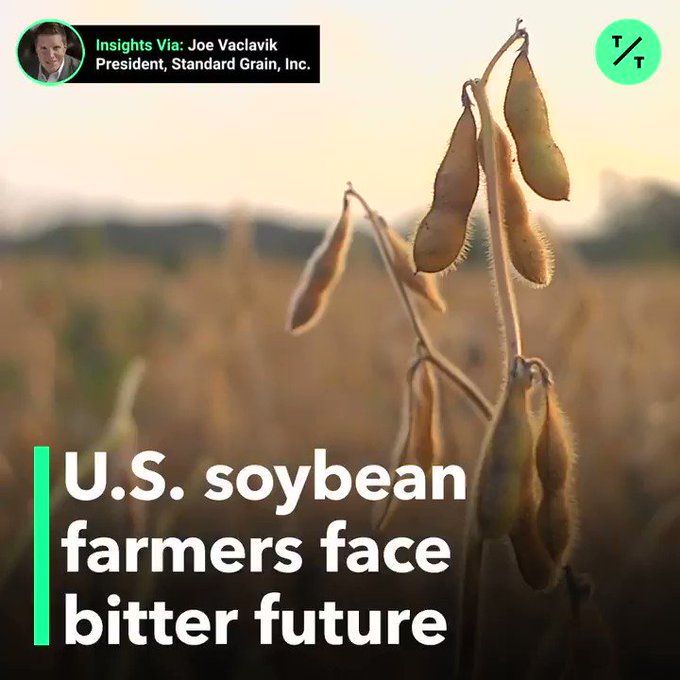 But The Bloomberg Open daily Email on Friday indicated that, “Huawei is back in the eye of the trade storm. The White House delayed a decision on allowing businesses to resume tieswith the Chinese company, following China’s decision to halt purchases of U.S. farm goods on the new tariff threat, people familiar said.”

President Trump raised the possibility that trade talks with China could break off, causing stocks to fall.

“In comments to reporters on Friday, Mr. Trump indicated the U.S. was prepared for the talks to be canceled. They were tentatively set to take place in Washington next month.

“We’ll see whether or not we keep our meeting in September. If we do, that’s fine. If we don’t, that’s fine,” Trump said after a week of criticizing China’s trade practices, accusing Beijing of currency manipulation and attempting to “hurt” U.S. jobs https://politi.co/2Kt3r0R 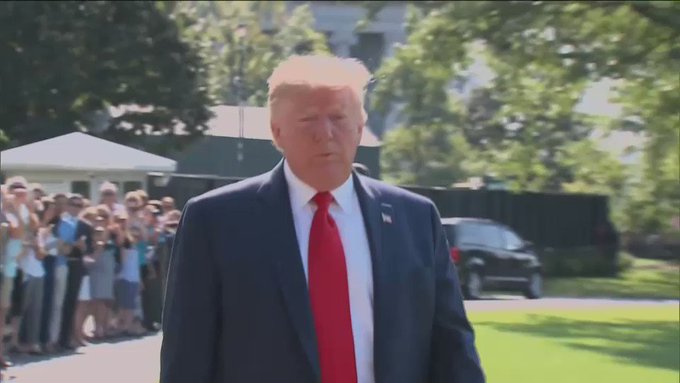 “‘We’ll see whether or not we keep our meeting in September. If we do, that’s fine. If we don’t, that’s fine. But it’s time that somebody does what we’re doing,’ he said, referring to tariffs and other measures the U.S. has taken against China over trade.”

Reuters writer Roberto Samora reported on Tuesday that, “Brazil’s new soybean crop, which farmers are expected to start planting next month, is seen reaching 36.7 million hectares (90.68 million acres), an area 2.3% larger than seen in the previous crop, according to the average forecast from a poll of analysts.

“Output of the new crop was seen on average at 122.8 million tonnes, 6.8% more than in the previous season, according to the poll. Analysts said expansion of soy planting will probably be limited by China’s swine flu outbreak, lower global soy prices and the potential for higher transportation costs in Brazil.

“If the poll’s estimates are confirmed, Brazil would surpass the United States as the world’s top producer. According to the latest USDA forecast, the U.S. farmers are expected to produce 104.64 million tonnes in the current season that was hit by above-average rains.”

The article pointed out that, “[A]fter shipping record volumes and a growing season that saw weather problems, Brazilian inventories are now dwindling and the next harvest is still months away.

“That could create a problem for China, the top soy consumer. After Trump escalated the trade spat last week, the Asian nation halted its purchases of American farm goods. That leaves few alternatives to Brazil. Argentina may be one option, but farmers there are currently hoarding beans amid upcoming elections.” 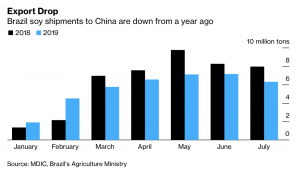 “Brazil’s soybean stockpiles are down about 80% from this time last year, and the country’s exports fell 8% through July, while cargoes to China dropped 11%. Price premiums for shipments from the country are on the rise,” the article said.

In a related article, Reuters writer Naveen Thukral reported on Thursday that,

A jump in prices for Brazilian soybeans is putting off buyers in China, two traders said, even as the rise was driven by expected demand from the world’s No.2 economy as its trade war with Washington intensifies.

Also last week, Bloomberg writers Jasmine Ng and Sheryl Tian Tong Lee reported that, “Soybean shipments jumped in July to the highest level in almost a year as Chinese crushers boosted volumes from South America, and before halting U.S. purchases. Imports rose to 8.64 million tons last month, from 6.51 million tons in June and 8 million a year ago. The strength may persist through August and September, which could raise inventories and slow future purchases.” 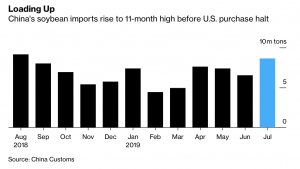 Meanwhile, Bloomberg writer Michael Hirtzer reported last week that, “While China announced it has halted imports of American soybeans, a mysterious buyer has stepped up. The U.S. Department of Agriculture announced Wednesday a sale of 165,000 metric tons of the oilseed to ‘unknown destinations.’

“Such unknown buyers often were thought to be China, which typically brings in about two-thirds of global soybean exports. However, the Asian nation’s government on Monday asked its state-owned enterprises to halt purchases of U.S. agriculture products as the trade war between the countries escalated.”

The article explained that, “USDA’s announcement Wednesday was for roughly three bulk cargoes to be shipped in the 2019/20 season that begins on Sept. 1, in a deal that would have taken place in the past 24 hours. The buyer would have received a relative bargain after Chicago soybean futures this week fell to the lowest since May, dragged down by the trade tensions.” 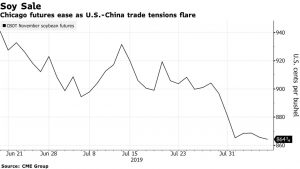 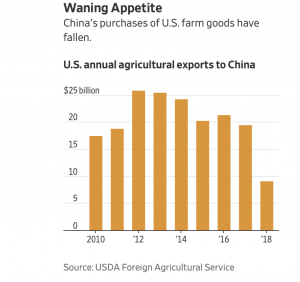 “China’s move will affect farmers raising fuzzy green soybean pods in Illinois, milking cows in California and feeding hogs in North Carolina, all of whom have seen business suffer as a result of tariffs that Chinese officials implemented last year.”

Adam Belz reported last week at the Minneapolis Star Tribune Online that, “The impasse with China is perhaps even more frustrating for hog farmers, given how much African swine fever has decimated swine herds in China and high demand for pork there, said Dave Preisler, executive director of the Minnesota Pork Producers Association.

“‘It’s just plain disappointing,’ Preisler said. ‘There could be such tremendous opportunity.’

Chinese pork demand will instead be met by European and South American hog farmers.

And Bloomberg writers Mike Dorning and Erik Wasson reported last week that, “Farmers’ discontent over President Donald Trump’s escalating trade war with China erupted into the open Wednesday as his agriculture secretary was confronted at a fair in rural Minnesota.

“Gary Wertish, president of the Minnesota Farmers Union, drew applause as he leveled criticism of the administration’s trade policy at a forum with Agriculture Secretary Sonny Perdue in front of thousands of farmers gathered in a metal barn for a panel discussion.”

“Wertish criticized Trump’s ‘go-it-alone approach’ and the trade dispute’s ‘devastating damage not only to rural communities.’ He expressed fears Trump’s $28 billion in trade aid will undermine public support for federal farm subsidies, saying the assistance is already being pilloried ‘as a welfare program, as bailouts.’”

The AP article stated that, “Perdue disagreed that the lost markets won’t come back.

“‘The markets are fungible. China is going to buy from where they see the best value.’ He added that the U.S. government is working to develop alternate markets — including in India, Thailand, Indonesia and Malaysia — and said the soybean industry probably became ‘too dependent’ on China.

“‘I think we’ll gain the market back. But it’s got to be a fair, reciprocal and free trade environment, not allowing China to cheat,’ Perdue said.”