Last week, Reuters writers Hallie Gu and Dominique Patton reported that, “China’s imports of soybeans from the United States in February surged from January as the cargoes booked following a truce in the trade war between the two countries arrived, according to customs data published on [March 25th].

China brought in 907,754 tonnes of U.S. soybeans in February, up from 135,814 tonnes in January, the General Administration of Customs said.

“However, that was just a fraction of the 3.35 million tonnes imported in February 2018 as Beijing’s hefty tariffs on U.S. shipments curbed purchases.”

The Reuters article pointed out that, “China brought in 1.986 million tonnes of Brazilian soybeans in February, up 13 percent from the 1.75 million tonnes in the same month last year, customs data showed.” 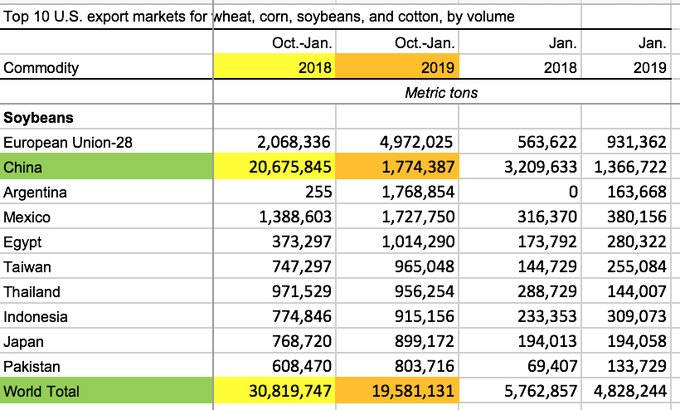 In a separate Reuters article last week, Karl Plume reported that, “Chinese state-owned firms bought about 1.5 million tonnes of U.S. soybeans on Thursday for shipment in July and August, in their second major purchase of U.S. supplies this month, three traders with knowledge of the deals said.”

The article stated that, “Accelerated Chinese buying of U.S. soybeans helped to narrow the U.S. trade deficit by the most in 10 months in January, according to U.S. Commerce Department data on Wednesday.” 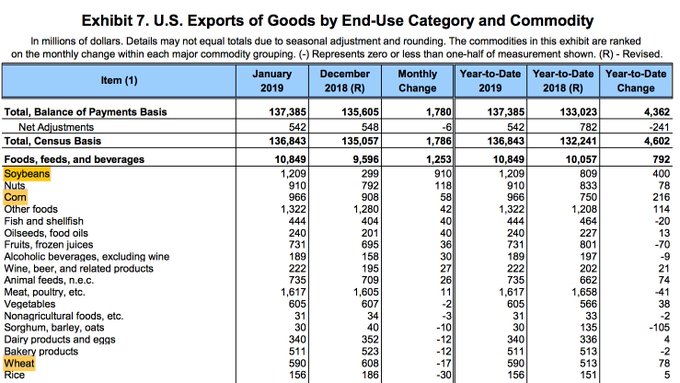 And on Monday, Reuters writer Mark Weinraub reported that, “U.S. exporters sold 828,000 tonnes of soybeans to China, the U.S. Agriculture Department said on Monday, the second sale announced since the two countries concluded their latest round of negotiations last week to end their trade war.”

“The USDA, in its daily reporting system, said that private exporters indicated the deal was for the 2018/19 marketing year, which ends on Aug. 31.”

The Reuters article noted that, “China has stepped up its purchases of U.S. soybeans during negotiations to end the trade war between the two countries but the amount purchased remained well below typical levels. The U.S. soybean stockpile has ballooned to record levels during the dispute.” 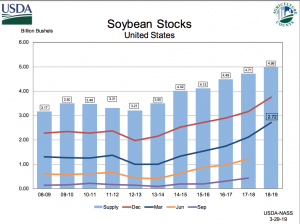 Trade Talks in Beijing Last Week, and in Washington, D.C. This Week

Late last week, Bloomberg’s Sarah McGregor and Kevin Cirilli reported that, “The Trump administration is prepared to keep negotiating with China for weeks or even months to reach a trade deal that will ensure the world’s second-largest economy improves market access and intellectual-property policies for U.S. companies, a senior American official said.

“‘This is not time-dependent. This is policy- and enforcement-dependent,’ White House economic adviser Larry Kudlow said in a speech in Washington on Thursday. ‘If it takes a few more weeks, or if it takes months, so be it. We have to get a great deal, as the president says, that works for the United States. That’s our principal interest.’” 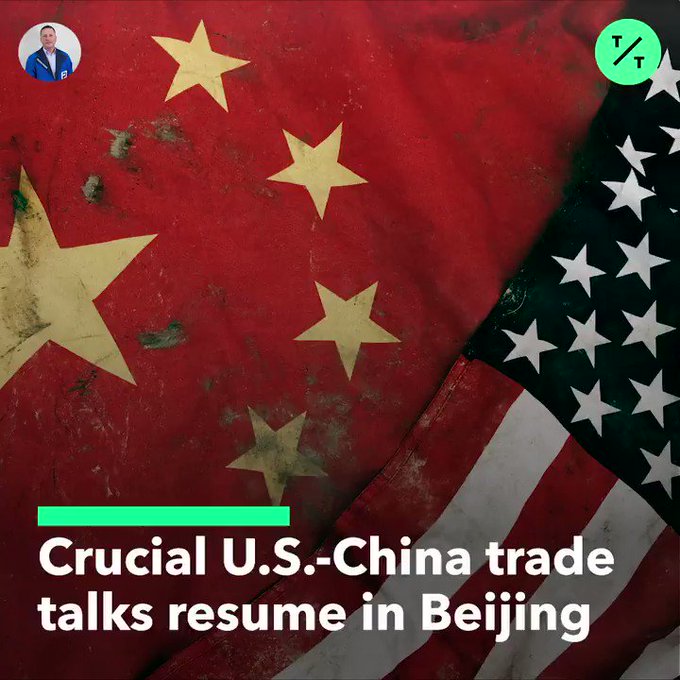 The need for a U.S.-China trade deal has intensified due to weakening global growth. Insights via@CMEGroup

The Bloomberg article indicated that, “U.S. Trade Representative Robert Lighthizer and Treasury Secretary Steven Mnuchin met with Chinese negotiators in Beijing for a working dinner on Thursday. Mnuchin called the meeting ‘very productive‘ before heading out for a full day of talks on Friday. 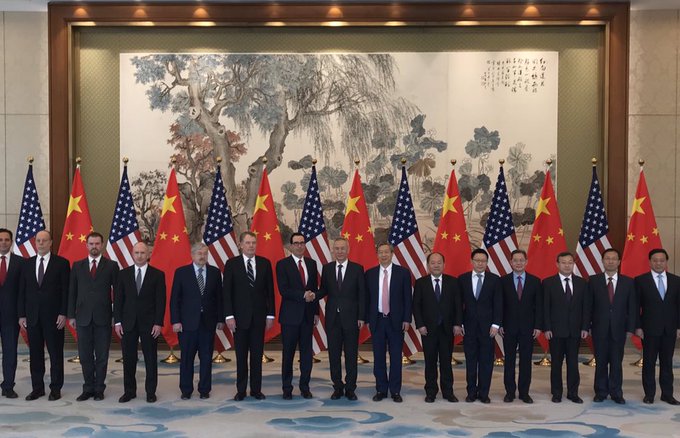 .@USTradeRep and I concluded constructive trade talks in Beijing. I look forward to welcoming China’s Vice Premier Liu He to continue these important discussions in Washington next week. #USEmbassyChina

The Bloomberg article added that, “The discussions will continue next week when Liu will travel to Washington to meet with U.S. negotiators as well as President Donald Trump, according to Kudlow.”

Wall Street Journal writer Lingling Wei reported Thursday that, “The two sides are aiming for a package deal that includes substantial increases in U.S. exports to China and Chinese pledges to address some long-running structural issues, such as allowing greater market access to American companies and boosting protection of intellectual property. Important issues still to resolve include how to enforce a deal and the pace at which the U.S. and China will roll back the tariffs on hundreds of billions of dollars in goods imposed in the past year.

“Chinese Commerce Ministry spokesman Gao Feng told reporters on Thursday that while some progress has been made, ‘much work remains to be accomplished.’” 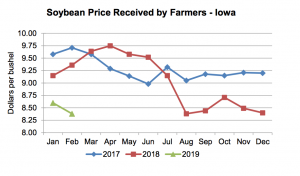 “The February 2019 average price received by farmers for soybeans [in Iowa], at $8.38 per bushel, was down 22 cents from the January price and 98 cents below the February 2018 price.” (Iowa Ag News – Monthly Prices. USDA- National Agricultural Statistics Service, Upper Midwest Regional Field Office (March 28, 2019)).

On Friday, Bloomberg writers Jeff Black and Jenny Leonard reported that, “Chinese and U.S. negotiators made ‘new progress‘ in trade negotiations as both sides discussed the wording of an agreement that’s designed to resolve a bilateral trade dispute, according to Beijing’s official news agency Xinhua.“The report echoed officials familiar with the talks who said negotiators have been working line-by-line through the text of an agreement that can be put before President Donald Trump and his Chinese counterpart Xi Jinping.

“U.S. Trade Representative Robert Lighthizer and U.S. Treasury Secretary Steven Mnuchin held meetings in Beijing Friday partly to ensure there were no discrepancies in the English- and Chinese-language versions of the text, and also to balance the number of working visits to each capital, according to the officials, who asked not to be identified because the talks aren’t public.”

Black and Leonard noted that, “As China nears agreement with the U.S., officials are keen to maintain an appearance of equality between the two sides, which explains the focus on matching visits to Beijing and Washington, the people said. While talks have taken place by phone over the past month, the last face-to-face meetings took place in Washington in February.”

A wider range of fentanyl derivatives will be declared controlled substances on May 1, as Beijing moves ahead to meet a promise made to President Trump amid trade negotiations.

On Monday, New York Times writers Ana Swanson and Keith Bradsher reported that, “Negotiators are still working out deal terms, but any agreement seems certain to involve China’s promise to purchase hundreds of billions of dollars of American goods. For Mr. Trump, this is an essential element that will help reduce the United States’ record trade deficit with China and bolster farmers and other constituencies hurt by his trade war.”
Source: Keith Good, Farm Policy News