On Wednesday, the U.S. Department of Agriculture released its 10-year projections for the food and agricultural sector.  The report noted that, “Over the next several years, the agricultural sector will continue to adjust to the ongoing China-U.S. trade dispute (which is assumed to last the duration of the projection period). This results in an expected shift away from soybean production in the U.S. due to lower prices and towards corn and wheat which are expected to generate relatively higher returns.”  Today’s update highlights aspects of the report that focused on corn and soybeans.

The baseline report stated that, “U.S. corn production is projected to continue to grow over the next decade as trade tensions with China constrain soybean plantings while expanding meat production increases feed usage. Planted area is expected to increase in the near-term and then slowly decline in the second half of the decade as markets adjust to a new trade equilibrium and demand for U.S. soybeans grows again.” 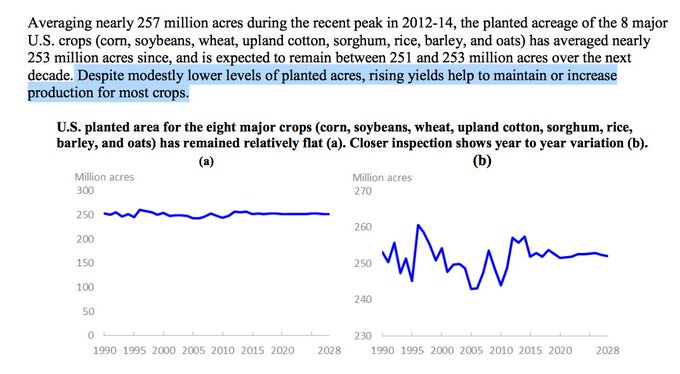 The lower expected return on #soybeans for U.S. producers is anticipated to lead to changes in #crop plantings – most notably shifting from soybeans into #corn and #wheat. @USDA #Agricultural Projections to 2028, https://goo.gl/Fn9B51

With respect to ethanol, the report stated that, “With little change from previous years, the outlook for corn-based ethanol production is projected to rise slowly over the next few years and then decline to 2016 levels by the end of the decade. Infrastructural, geographical and other constraints for higher level ethanol blends (E15 and E85) and falling U.S. gasoline consumption due to rising fuel efficiency, rising oil costs, and changing consumer lifestyles and urban transport modes all support the expected decline.” 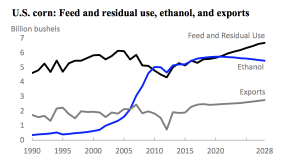 While addressing long-term corn exports, USDA explained that, “Continued competition from Brazil, Argentina, and Ukraine, growing domestic feed use, and a steady demand for ethanol production, mean that the U.S. market share of global corn trade will slowly fall to under 36 percent by the end of the decade.” 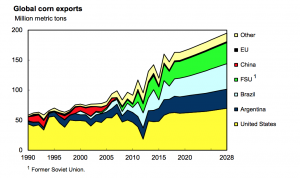 “Strong export competition leads to a reduction of the U.S. share of world corn exports (from 38 to 36 percent) over the projection period; the past 7-year average is 38 percent, well below the 59-percent share for the 2001/02 to 2010/11 period.” (USDA Agricultural Projections to 2028. Office of the Chief Economist, World Agricultural Outlook Board, U.S. Department of Agriculture. (March 13, 2019)).

“Modest growth in nominal corn prices is projected over the first half of the coming decade as ending stocks remain high due to low demand growth coupled with rising yields and production. Nominal prices are expected to tail off in the second half as ending stocks continue to grow. Real prices are expected to drop slightly over the projection period,” the report said. 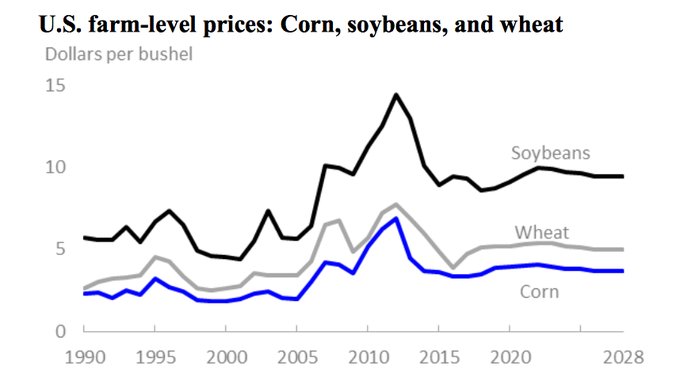 #Trade tensions with #China have caused #soybean prices to fall in the U.S. as China shifted its purchases from the U.S. to #Brazil.

Last week’s report noted that, “Lower [soybean] prices for U.S. farmers reduce incentives to plant, and plantings are expected to drop roughly 6.5 million acres at the start of the projection period. As U.S. producers adjust and find new markets, plantings slowly increase over the decade.”

Soybean exports drop in 2018/19 and are not expected to recover to 2017/18 levels until the middle of the projection period as producers adjust to the new trade environment. With little to no expected access to China markets, export growth is expected to slow.

The update pointed out that, “Nominal soybean prices dropped in the 2018/19 marketing year but are expected to rise slowly as exporters swap trading partners. With the assumption of continuing trade tensions through the duration of the decade, Brazil is expected to ship nearly all its soybeans to meet China’s demand. As a result, the U.S. is expected to supply the bulk of the rest of the world. Demand for soybeans in the rest of the world is not expected to grow as fast as China. Nevertheless, emerging economies will also continue to expand use of soybeans as a feedstock as per capita incomes are expected to continue to rise and food preferences change, generating an increased demand for meat and eggs.”

More narrowly, the report indicated that, “Several notable changes are evident in USDA’s projections to 2028 compared with the previous year’s projections:

The baseline report added that, “China’s soybean imports have risen steadily since the late 1990’s. In 2017/18, China accounted for about 62 percent of world soybean trade. China’s imports are projected to increase from 97.6 million tons in 2019/20 to 126 million tons in 2028/29, accounting for 76 percent of the increase in trade. The projections assume that China will continue to meet rising demand for edible vegetable oils and protein in feed by importing soybeans, while supporting domestic production of food and feed grains.” 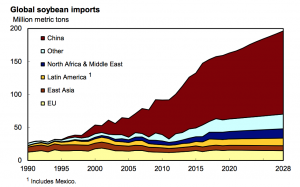 U.S. soybean exports to the European Union have recently increased; however, while addressing total EU soybean demand, the baseline report explained that, “EU soybean imports have been stable near 14.6 million tons over the past five years due to decreases in internal EU grain prices and increases in grain and rapeseed meal feeding. EU soybean imports are projected to increase to 15.7 million tons in 2020/21, but then decline gradually to 14.9 million tons by 2028/29.” 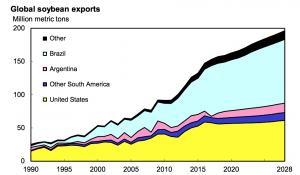 “The three leading soybean exporters—the United States, Brazil, and Argentina—are projected to account for about 87.7 percent of world soybean trade over the next decade.”  (USDA Agricultural Projections to 2028. Office of the Chief Economist, World Agricultural Outlook Board, U.S. Department of Agriculture. (March 13, 2019)).

The baseline report also noted that, “Other South American countries, principally Uruguay, Paraguay, and Bolivia, also are projected to expand their area planted to soybeans. Exports by these countries increase 38.4 percent to 11.8 million tons by 2028/29, adding 3.3 million tons to world soybean exports.”