Gary Crawford explained in a segment for USDA Radio on Thursday that, “Back in May, Agricultural Department analysts were forecasting this 2019 Fiscal Year’s U.S. ag exports to be $137 billion, down $4.5 billion from their previous forecast, and down $6.3 billion from 2018.

“In their latest look [on Thursday], they have sliced another $2.5 billion off the forecast.  ‘We are now looking at a fiscal year 2019 forecast of $134.5 billion,’ [said Deputy USDA Chief Economist Warren Preston].

Thursday’s Radio segment added, “[Dr. Preston] says back in May the export forecast cuts were mainly from the China situation.  But he told us: ‘The fiscal 2019 exports to China from May to August were actually increased by $800 million to $7.3 billion.’ Mainly from a recent uptick in Chinese purchases of soybeans and pork.

“The declines in overall export prospects are coming from lower sales to several other markets, and generally from, ‘Decreased economic growth world-wide, a relatively strong U.S. dollar, and a lot of trade uncertainty,’ [Dr. Preston said].” 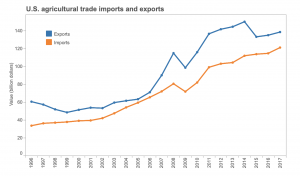 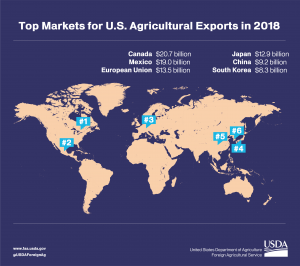 The Outlook added that, “FY 2020 grain and feed exports are forecast at $30.1 billion, unchanged from the revised estimate for FY 2019. Wheat exports for FY 2020 are forecast up $100 million from the previous year at $6.3 billion, as higher unit values offset slightly lower volumes. Demand for U.S. wheat will likely be strong in key markets such as Mexico and the Philippines, but shipments to Egypt will likely be weaker in light of abundant competitor supplies, primarily from Russia and the European Union (EU). Corn exports are forecast up $200 million to $9.4 billion on larger volumes but lower unit values, as easing supply concerns have improved the prospects for U.S. exporters. Sorghum exports for FY 2020 are forecast at $400 million, unchanged from the FY 2019 estimate.”

While addressing FY 2019 grain and feed data in more detail, ERS indicated that, “FY 2019 grain and feed exports are forecast at $30.1 billion, down about $900 million from the May forecast, mostly due to lower corn exports. The corn export forecast has been lowered by $1.2 billion to $9.2 billion based on lower anticipated volumes. U.S. corn has faced strong competition in recent months from an abundant South American corn harvest, and this is expected to continue through September. Sorghum exports are forecast at $400 million, unchanged from the previous quarter.”

With respect to oilseeds, ERS noted that, “FY 2020 oilseed and oilseed products exports are forecast at $25.6 billion, up $400 million from the FY 2019 forecast, primarily based on higher soybean volume more than offsetting reduced unit values.

Despite a nearly-20-percent decline in the projected 2019 soybean harvest due to reduced plantings and lower yields, a record carry in stock of more than 29 million metric tons assures more-than-adequate supplies. Together with little year-over-year growth in global soybean demand—due primarily to lower demand in China in response to ASF and constraints on China’s purchases of U.S. soybeans in response to continuing trade frictions—export unit values are expected to decline slightly. Soybean exports are forecast to rise $400 million to $16.8 billion in FY 2020, while soybean meal exports are projected down 2 percent to $4.4 billion.

“Soybean oil exports are forecast to fall 13 percent or nearly $100 million on lower volume, as demand for soybeans for food and fuel helps to drive stocks to their lowest level since marketing year 2013/14. However, unit values are projected up 4 percent in response.

The greatest unknown is China’s demand for U.S. soybeans. However, premiums for South American soybeans will continue to enhance the competitiveness of U.S. soybeans and soybean meal in other markets, providing some relief from lower U.S. sales to China.

Regarding oilseeds and FY2019, the Outlook stated that, “The FY 2019 oilseeds and oilseed product export forecast is down $1.2 billion to $25.2 billion. The primary reason is somewhat lower volumes across the board, a reflection of weaker-than- expected global demand.” 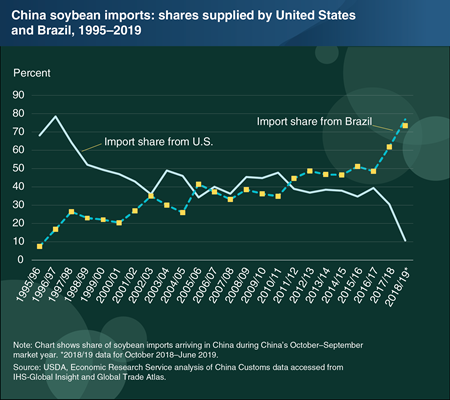 In related news, Bloomberg writer Isis Almeida reported last week that, “As confusion about the possibility of a trade deal between Washington and Beijing reigns, Chinese soybean buyers are taking no chances and are turning to U.S. rivals in South America to secure supplies for next year.

“The top importer of the commodity, used to make cooking oil and animal feed, has already started buying soybeans from South American for next year, according to people familiar with the matter. While China started purchasing a few cargoes just over a month ago, buyers last week stepped up interest for February and March shipments, said the people, who asked not to be named as the negotiations are private.”

With China’s #soybean demand falling markedly in 2018/19, partly due to the impact of African swine fever, other regions have bought more. However, global trade is still set to decline y/y. 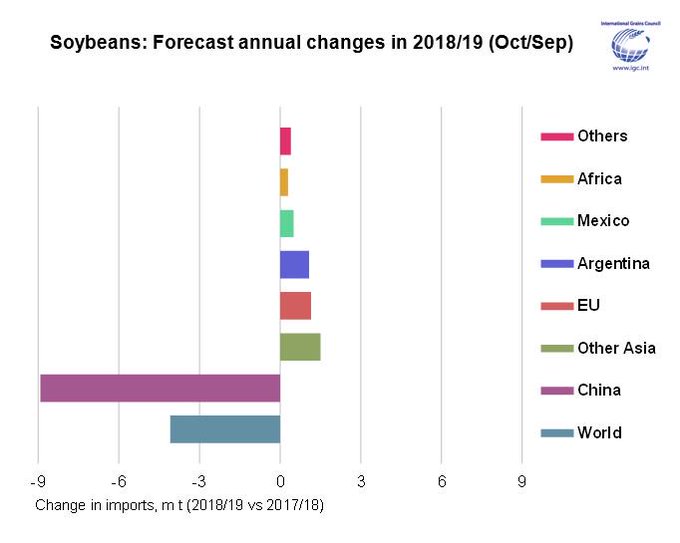 Also, New York Times writer Alan Rappeport reported on the front page of Tuesday’s paper that, “More than a year into the trade dispute, sales of American soybeans, pork, wheat and other agricultural products to China have dried up as Beijing retaliates against Mr. Trump’s tariffs on Chinese imports. Lucrative contracts that farmers long relied on for a significant source of income have evaporated, with Chinese buyers looking to other nations like Brazil and Canada to get the commodities they need. Farm bankruptcy filings in the year through June were up 13 percent from 2018 and loan delinquency rates are on the rise, according to the American Farm Bureau.”

Where are the soybeans? No one is making up for China’s slack. Monthly seaborne soybean exports to top trading partners from the U.S.: {@theterminal chart link: https://bloom.bg/2LgYtU5  } AHOY<Go> 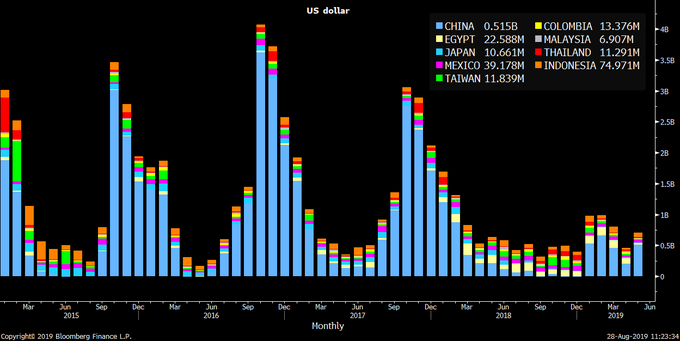 Tariffs on clothing and other imports from China went into effect on Sunday, escalating the trade war in a move expected to squarely hit consumers.

“The U.S. tariffs of 15% on tools, apparel items, some footwear and many electronics will be charged on imports valued at $111 billion last year, according to an analysis by The Wall Street Journal. Additional tariffs of 15% on $156 billion of smartphones, laptops, toys, videogames and other products have been postponed until Dec. 15, after the period when goods are typically imported for the holiday season.”

The Journal article noted that, “As Mr. Trump lays on more tariffs, Beijing’s hopes for a trade deal are waning, say people following the trade talks. ‘China’s leadership has concluded they’re probably not going to get a deal from Trump,’ said Arthur Kroeber, founding partner at research firm Gavekal Dragonomics. “China doesn’t see an incentive to help out at this point.”

“Mr. Kroeber and other analysts say China’s strategy involves toughing out the trade turbulence by shoring up its own economy, and waiting for the increased pain on American farmers and companies to translate into lobbying efforts against the Trump administration strategy.”

And Bloomberg writers Jenny Leonard, Jeff Black, Shawn Donnan, and Saleha Mohsin reported on Monday that, “Chinese and U.S. officials are struggling to agree on the schedule for a planned meeting this month to continue trade talks after Washington rejected Beijing’s request to delay tariffs that took effect over the weekend, according to people familiar with the discussions.

“Despite efforts by President Donald Trump to soothe financial markets and portray the talks as making progress, the world’s two biggest economic powers have yet to agree on basic terms of re-engagement, with mistrust on both sides.” 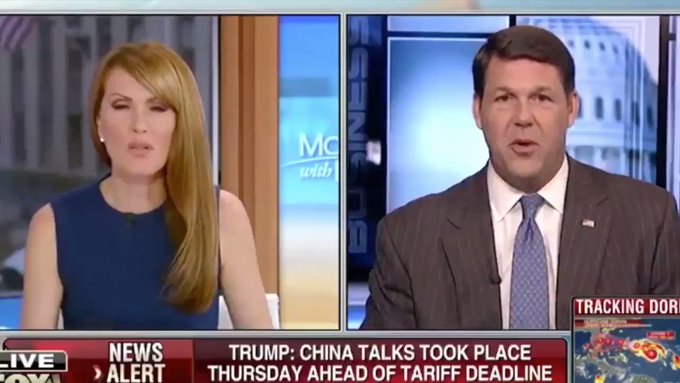 On Tuesday, Wall Street Journal writers Andrew Restuccia and William Mauldin reported that, “President Trump said he would redouble his pressure on China if he wins a second term, warning Beijing not to stall trade negotiations until after the 2020 U.S. election and vowing to stick with his go-it-alone approach to the discussions.”

The Journal writers added that, “Mr. Trump’s latest comments came two days after the U.S. imposed new tariffs on clothing and other imports from China on Sunday, escalating a trade war between the two countries that has rocked global markets and hurt U.S. consumers. Chinese retaliatory measures also went into effect on Sunday. Mr. Trump made the case on Sunday that the tariffs are necessary to make the U.S. less reliant on Chinese goods, adding, ‘we don’t want to be servants to the Chinese!’”