Bill Northey, the USDA Under Secretary for Farm Production and Conservation, was a guest on Monday’s “Adams on Agriculture” radio show with Mike Adams, where the conversation focused on the latest round of Market Facilitation Program (MFP2) payments to farmers.

Mike Adams began Monday’s’s interview by saying, “Can you give us, share with us what went into the conversation, the discussion, and finally the decision for this formula for this round of payments?”

Under Secretary Northey indicated that, “Everybody remembers that those trade talks [with China] broke down back in May when certainly this year, especially, there was a lot of crop to go in the ground. So right away the emphasis was on making sure that we did not provide signals that caused folks to try and project what a payment might be, and therefore plant to it, oversupply some crops, undersupply others, and then cause a lot of folks to try and guess well before details were out what they should plant.

“And so it may have been a delay from what folks would have liked to be able to have final details, and it took a long time to put pieces together, but to be able to come up with a county payment whereby a producer in that county could plant nearly any crop, a long list of crops, and be able to know that what they planted was not going to impact the payment that they would receive in that county.”

Under Secretary Northey explained that,

So it took a lot of other work to figure out what that appropriate payment was, so it was looking at the production in that county, how that historical production over several years, look at how that production was being impacted by the trade, the trade both tariff and non-tariff barriers, and coming up with a trade damage per county, being able to divide it by those acres of those qualifying crops in that county. And so you ended up with an actual payment number.

“And it was obviously different from county to county, and I’m sure some folks would look across the county line and either are glad they don’t have the neighbors or wish they had the neighbors. But there was a reason both for the county payment mechanism as well as how we ended up with the final payment that we did in each county.” 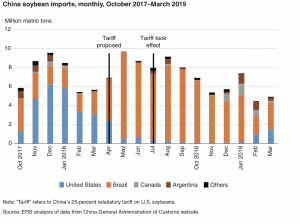 More narrowly, Mr. Adams asked, “Obviously when we look at it, it’s tilted more this time towards the cotton producing areas. Why?”

“You know, as the chief economist looked back over the last ten years, you looked at lots of different impacts, and cotton, soybeans, pork, there’s sorghum, others have had some years,” Under Secretary Northey said.  “Certainly corn had more years of some trade than what was originally recognized in just looking back at 2017. But as you look back over ten years you realize that both tariff damages in the last year, but also other actions—again, China is being the main driver here—but other trade partners are in the conversation as well, where was that trade happening and then how much of the value of that crop potentially was lost over the last handful of years because of some of the action that our partners have.

“So you look both at dollar values of crops and then the percentage of the crop impact. You ended up with certainly some of the crops being impacted more than other crops. And every place you’re at it’s a blend of all the crops in that county. So if you had a lot of different crops in that county, you had both high value and—or high impacted crops and low impacted crops. But it was a blend to end up with that final rate for each county.”

Under Secretary Northey pointed out that, “We do have some small payment for prevent plant acres, recognizing that there certainly was an impact on prices in general, and also that in some cases we have second crops or other kinds of things out there where folks may try and, or theoretically, at least, could create some harvests, so we looked at what legally could be done, what the right number is.

“I’m sure there’s both disagreement that there should be a payment made as well as others that say that provisions should be different, whether it’s a planting date or that the numbers should be higher. But we came to a place where we could justify a small payment legally and be able to have that there for the producers that are hit hard with prevent plant.

“Of course there may be some provisions yet going forward both in crop insurance for the bulk of the folks. That’s the main safety net for prevent plant. And then we’ll review and see what will be available when we implement the disaster bill as well.” 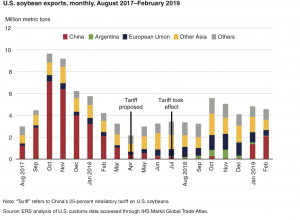 Also on the prevent plant issue, Under Secretary Northey noted that, “You know, there was such a challenge this year for folks trying to get the planting done, first of all. Is the field even dry enough that you can drag a planter across the field. And that was a determining factor. We’ve had folks that haven’t been able to get in the field to plant a cover crop yet and have every intention of being able to do that. So there were so many factors.

For the most part what we tried to do is remind folks the most important thing is to plant for your agronomic conditions. If you can get a crop planted and that works for you economically, then you make the decision based on what your projected yields are.

Farmdoc’s Scott Irwin was also on Monday’s Adams on Agriculture program and pointed out that, “Well, actually, I was not surprised that prevent plant acres are part of the program at $15 an acre, but I really thought that given the political pressure that they would go with a full MFP2 payment for prevent plant, and they limited it to $15 an acre. That really did surprise me.”

Mr. Adams queried: “Some are saying, well, how does a trade war with China, how does that…I mean, did that…that didn’t bring about the weather conditions that led to prevent plant acres, so some are saying why were they even covered at all.”

And that reference price is directly impacted by the trade difficulties. So you’re having lower prevent plant payments because of the trade war. Now, you know, I think there’s a good debate about okay, since you didn’t plant maybe you didn’t incur full production costs, you don’t get the full MFP2 payment. We can argue about that. But there’s a direct and reasonable economic argument for the PP acre returns being impacted by the trade war as well, and I find that argument persuasive.

Mr. Adams also stated that, “We know farmers have lost a lot during the trade war, and this doesn’t make up for everything, but there’s no doubt this will help not only the farmers, but that, of course, then also helps the rural economy.”

Dr. Irwin noted that, “Absolutely. I mean, you know, I did some back of the envelope calculations, and, you know, a county like Champaign County, Illinois, where I live, will probably see an injection into the rural economy of at least $40 million, and it will be well over a billion dollars for the state as a whole. That will really make a clear difference.”