Grace Zaplatynsky reported on Friday at the Globe Gazette (Mason City, Iowa) Online that, “This year has not been the greatest year for farmers with the soaked spring and now the cold and early snow in fall.”

The article noted that, “[Mason City farmer Kevin Pope] said he’s a little more than halfway through harvest this year after starting the first week of October, but in a normal year he’s usually done with the harvest by Nov. 10.”

Moderate to heavy snowfall across the region the past two days also led to more than 200 daily snowfall records. 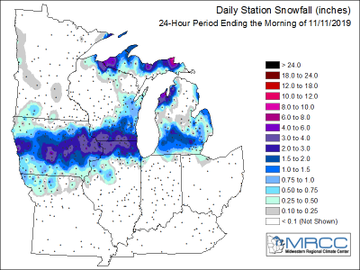 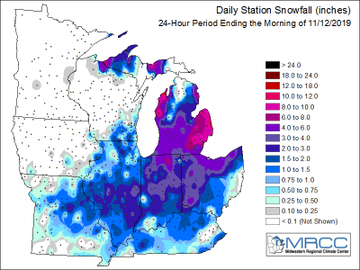 Ms. Zaplatynsky added that, “The weather isn’t the only challenge for farmers this year; a propane shortage is in full swing as well, and Iowa Farm Bureau Regional Manager Trae Hestness estimated they’ll be able to last just about another month.

#Iowa: Sixty-four percent of the #corn #crop has been harvested for grain, 9 days behind last year and 10 days behind the 5-year average, @usda_nass 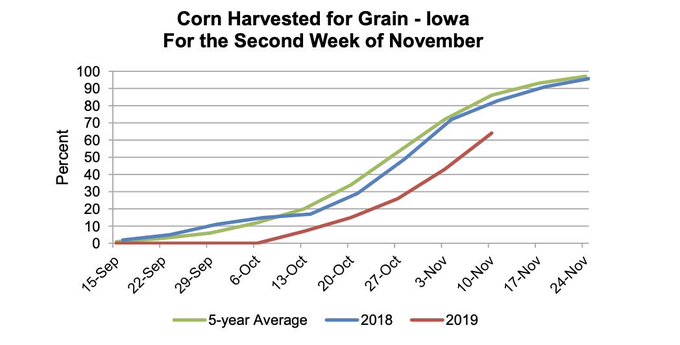 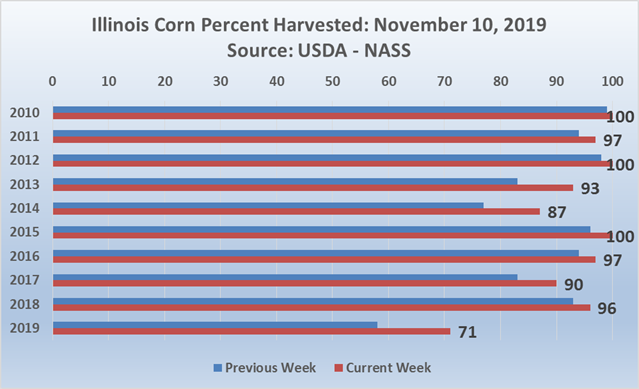 Couple that demand with the increasing cold weather, and with it the increase in propane use for drying the corn out more and the need to heat homes, suppliers were left unprepared.

The Globe Gazette article stated that, “Not all farmers have the capability to dry their own corn on their farm, so they take them to a co-op to dry, which many use propane. Now the co-ops are shutting down and not accepting wet grain at noon, Hestness said.

“‘When they do that, it’s hard for farmers to continue to get this crop out of the field,’ he said. ‘Now that there’s snow on the ground, it’s getting colder, you’re losing yields, you’re losing money, you’re leaving money out in the fields. There’s a lot of stuff that’s going on right now, that with this entire year and everything that’s happened, this is just another piece, another straw on the camel’s back.’” 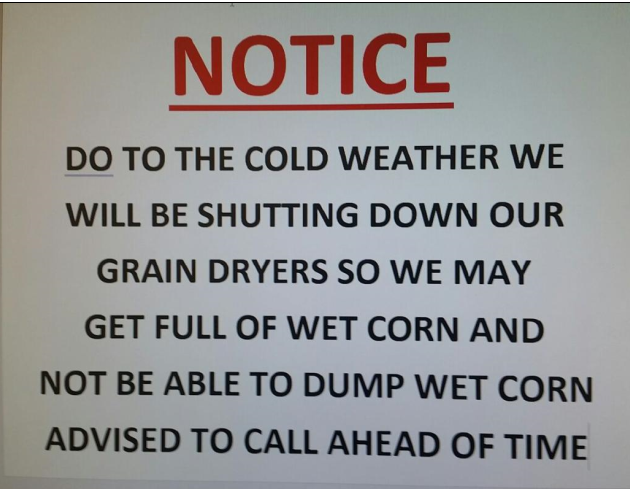 Also on the propane drying issue, Reuters writer Mark Weinraub reported last week that, “Grain merchant Archer Daniels Midland Co is waiving the fees it charges farmers to dry grain at three of its Midwestern corn processors as it seeks supplies to keep the plants running at optimum levels through a slow, wet harvest period, a spokeswoman said on Thursday.”

Farmers, who are weeks behind schedule in much of the U.S. corn belt due to rainy harvest conditions, have been reluctant to sell their grain at current price levels. Free drying offers them a significant break as tight supplies of propane needed to run grain driers have sent costs soaring this fall.

“But a spokeswoman said in an e-mailed statement that ADM on Wednesday started offering free drying of corn at 19% moisture rate or less that farmers brought to its wet corn mills in Decatur, Illinois, Cedar Rapids, Iowa, and Clinton, Iowa. The plants process corn into ethanol and produce ingredients used by food and beverage companies.”

Meanwhile, Jessie Van Berkel reported on the front page of Friday’s Minneapolis Star Tribune that, “Gov. Tim Walz made a plea Thursday on behalf of Minnesota farmers beset by waterlogged fields that made it difficult to plant and harvest soybeans, or whose beets and potatoes remain frozen in the ground.

“‘Northwest Minnesota needs access to federal aid to recover and endure the effects these losses will have in the coming years,’ Walz said in a letter to U.S. Agriculture Secretary Sonny Perdue.

“Farmers have been pushing for federal disaster assistance after an unusually hard season made worse by President Donald Trump’s trade war with China. Walz took up their call Thursday, asking the U.S. Department of Agriculture (USDA) to grant disaster designation to a dozen Minnesota counties. The designation makes it easier for affected farmers to access loans and qualify for a federal program that helps offset disaster-related losses.”

Currently across much of Minnesota… #Harvest19 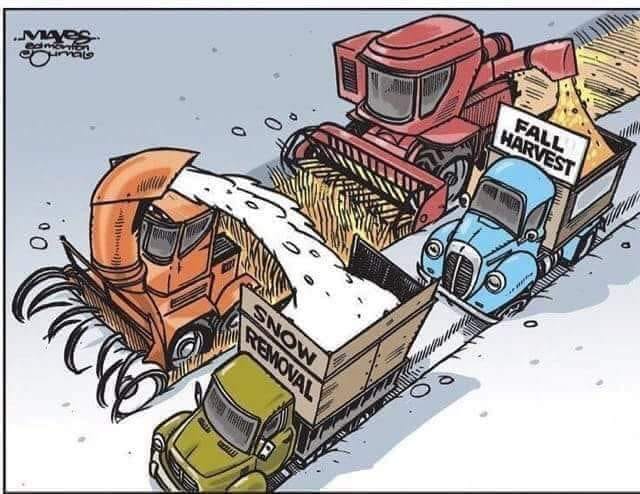 Additional news items pointed out that the adverse weather was set to continue in many parts of the Corn Belt.

John Bacon reported on the front page of Monday’s USA Today that, “A wide swath of the nation is bracing for an early season blast of cold, wintry weather that could smash records from New Mexico to New Jersey and bring more than a foot of snow to parts of Michigan. 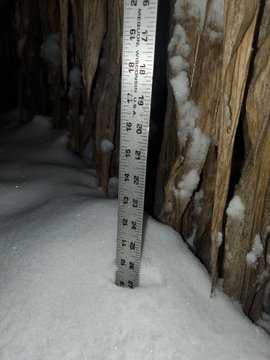 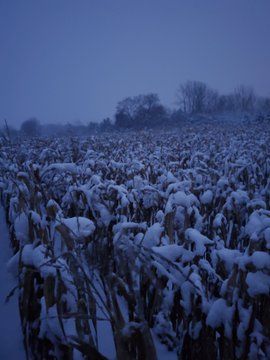 “‘148 daily record lows are currently forecast to be broken, tied, or come within 1 degree between Tuesday and Thursday this week,’ the National Weather Service Weather Prediction Center tweeted Sunday.” 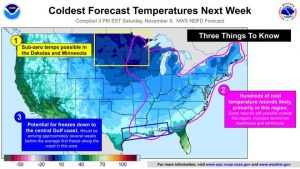 As poor weather conditions complicate efforts to complete harvest in some states, the effects of the fall weather have adversely impacted yields in some areas.

Unfortunately, the impacts of the wet year could continue into spring planting in 2020 for some areas.

A fall flood update last week from the National Weather Service explained that, “Well above normal rain and snowfall throughout 2019 has led to unprecedented flooding, record high river levels, and abnormally wet ground for the fall season across the region.

“Through the end of October, nearly every state in the Upper Midwest and Northern Plains was within its top five wettest years-to-date.”

South Dakota, Minnesota, Wisconsin, Illinois, and Michigan were record wet this January-to-October, while the Pacific Northwest and parts of the Southwest and Southeast experienced below-average precipitation. http://bit.ly/USClimate201910  #StateOfClimate 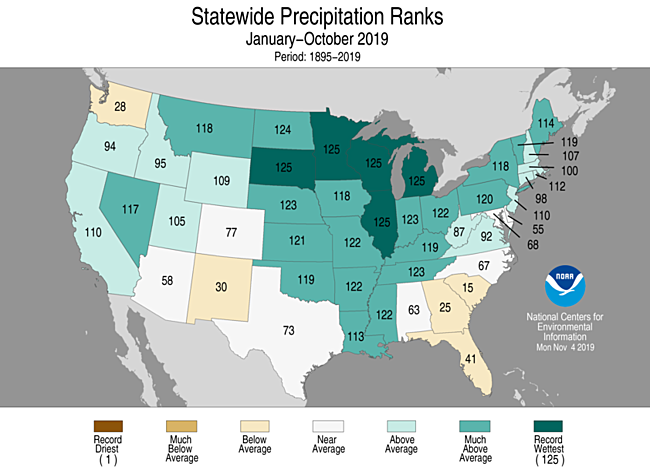 The Weather Service update noted that, “While wintertime precipitation makes up a relatively small amount of the overall yearly precipitation for many locations, the amount of snow that falls over the span of a winter has a significant impact on spring flood potential. This is because the water held in that snow tends to be released over a relatively short period of time during the spring thaw.” 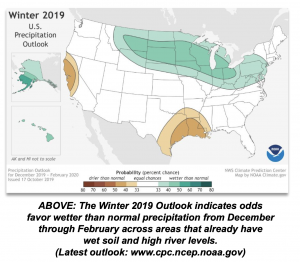 With respect to potential impacts of the “unusually high streamflow, water levels, and abnormally wet soil,” the Weather Service pointed to: “Widespread record flooding again next spring,” and “Delay or prevention of crop planting.”

Today’s Week-2 outlook for 11/19-11/25 anticipates increased chances of warmer and wetter than usual conditions across most of the country. The primary exception is parts of the West, where below-normal precipitation odds are elevated. https://www.cpc.ncep.noaa.gov/products/predictions/814day/ … 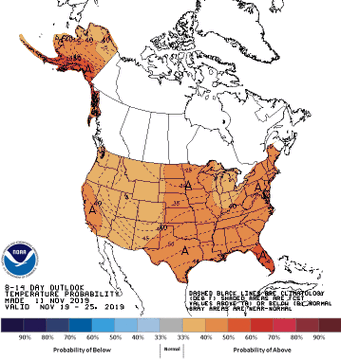 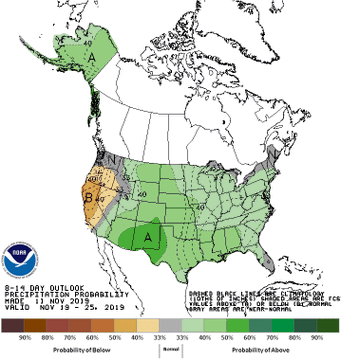 Another difficult spring would certainly be unwelcome in today’s economic climate.

Annie Gowen, in a front page article Sunday’s Washington Post, summed up the state of the agricultural economy this way: “Farm bankruptcies and loan delinquencies are rising, calamitous weather events are ruining crops, and profits are vanishing during Trump’s global trade disputes.”

“Farmers in Crisis Turn to High-Interest Loans as Banks Pull Back,” by Jacob Bunge and Kirk Maltais. The Wall Street Journal (November 10, 2019).

“Farm debt is projected to hit a record $416 billion this year, according to the U.S. Department of Agriculture, up nearly 40% since 2012. Defaults and bankruptcies are rising as well, crimping the ability of cash-strapped farmers to secure funding for seed, fertilizer and fuel.”

And Minneapolis Star Tribune writer Adam Belz reported last week that, “More than a third of U.S. farm income in 2019 will come from the U.S. government in the form of the trade-war bailout, crop-insurance payouts and other federal assistance.

“While farm income is projected to rise almost 5%, the share of that coming either directly from the government or from government-subsidized crop insurance is way above normal.”

The article added that, “In the past decade, farmers’ best year was 2013, when income reached $124 billion and government accounted for only 19% of that.

“But now the trade war with China, which shut down the largest market for U.S. soybeans, has deepened a four-year slump in grain prices. Poor weather in May and June delayed planting enough to keep millions of acres in the U.S. fallow.

“The weather struggles continued through to harvest, with snow blanketing soybean fields in northwest Minnesota and a hard frost hitting cornfields before maturity.

“Crop prices have not risen, and only payments through the USDA’s Market Facilitation Program — $6.8 billion through May and up to another $14.5 billion in a second round announced in May — have kept farmers close to breaking even.”