Mother Nature turned on the rain this spring across the US Corn Belt, and it looks like she’s not ready to stop anytime soon. Now that summer is in full swing, and corn planting is essentially wrapped up, let’s take a look at what the month of July has in store for the main growing region. Looking at both the month and the Corn Belt as a whole, July 2019 is currently forecast to trend the 14th warmest and 2nd wettest in 28+ years. While temperatures are expected to be slightly cooler than last July, precipitation is forecast to be well above last year and normal. If realized, region-wide precipitation would be most similar to July 2010. Breaking the month into halves, the first half of the month is expected to trend much wetter than normal while some drier than normal trends are possible during the latter half of the month. 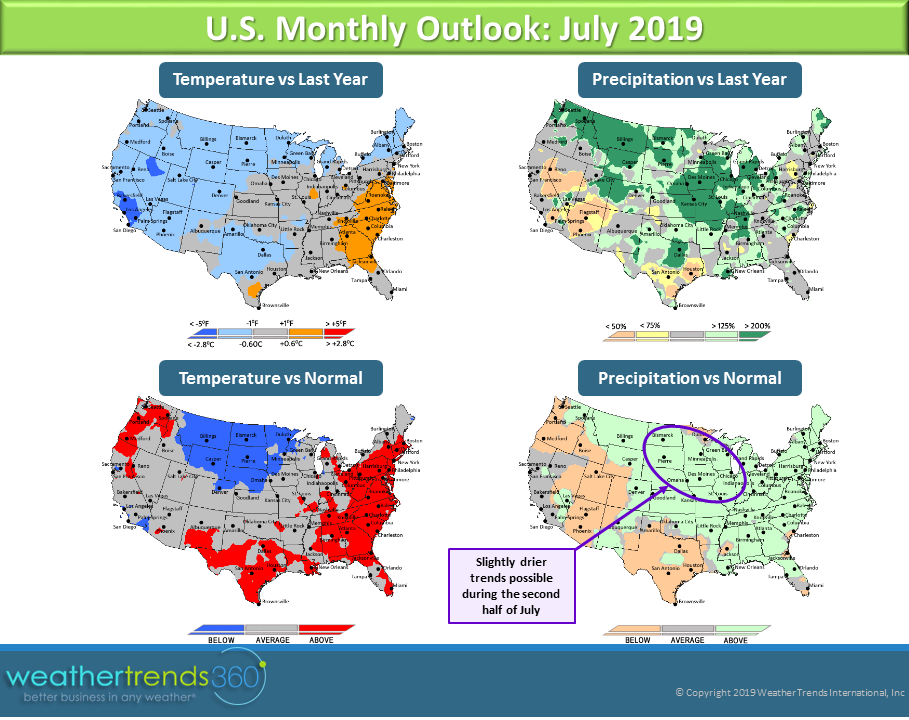 Meanwhile, down in Brazil, harvest of the safrinha corn is making good progress as drier weather has been favorable for field work. In main producer Mato Grosso, progress is just over 40% complete. Making about a 16% advancement in one week, the state’s harvest pace is now almost twice as fast as last year. Many producers are reporting record yields throughout this early harvest period. In Parana, the second-largest safrinha corn producing state in Brazil, harvest is about 34% complete with 82% of the remaining crop said to be in good condition. Wetter trends have slowed progress a bit recently and could continue to hamper progress over the next couple weeks. Current production estimates have safrinha corn output at 70.6 million tons and full season corn at 26.3 million tons. If realized, nearly three-quarters of Brazil’s corn production would come from the second crop this season.