Skip to main content
Home > News > What Happens When Corn and Soybeans Get Hit With a Freeze?

What Happens When Corn and Soybeans Get Hit With a Freeze? 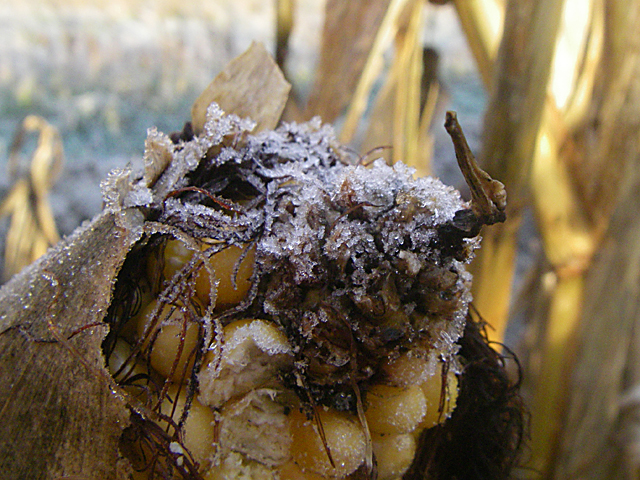 Brush up on how exactly cold temperatures — from a light frost to a killing freeze — affect immature corn and soybeans in the field. (DTN photo by Scott Kemper)

With a record-late corn and soybean crop creeping toward maturity this fall, the timing and severity of each region’s first freeze is top of mind for many farmers.

While the DTN fall weather forecast does not show a high risk for an early freeze in the central U.S., now is a good time to brush up on the agronomics behind the age-old threat of fall cold snaps.

We visited with University of Minnesota Extension soybean agronomist Seth Naeve and Purdue University Extension corn agronomist Bob Nielsen for more details on how corn and soybeans respond to cold temperatures, from a light frost to a deep freeze.

CORN: THE RACE TO BLACK LAYER

Corn reaches maturity when the cells at the tip of each kernel die and collapse into a distinct thin, black layer.

“It’s like a door closing,” explained Nielsen. “Once those cells have died and collapsed, the kernel cannot receive any more dry matter.”

At this point, corn yield is set, and cornfields are generally considered safe from yield loss from a sudden plunge in temperatures, Nielsen said. But at any stage before that — from dough through dent and as the milk line progresses — a lot of corn yield is still buried in the corn plant.

“At dough stage, those kernels only have about 55% of dry matter currently inside of them,” Nielsen estimated. “Even at full dent, when it’s common for people to breathe a sigh of relief and think they’ve made it, you could still have up to 40% of dry matter left to fill.”

Frost — the ice crystals that form on the surfaces of plants overnight — can occur before temperatures actually dip below 32 degrees Fahrenheit, noted Nielsen.

“We can get light frosts when temperatures are even as warm as 40 degrees, on a really clear night,” he noted. This light layer of frost can injure and kill plant leaves, but it usually doesn’t kill the corn stalk, he said.

The injured or dying leaves serve as an alarm system, telling the corn plant to go ahead and finish up, Nielsen explained.

“A light frost will simply accelerate that maturation process,” he said. “As long as the stalk remains alive, the plant will continue to move some dry matter into the kernels as they are prematurely shutting down. It will reach black layer prematurely, and — depending on how immature the corn was when it got hit — you can get lightweight kernels because you stopped the dry matter accumulation process early.”

Past research suggests that a light frost can drop yields by 35% if it hits at soft dough, by 27% at full dent, and by 6% if it occurs at the half-milk-line stage — about two to three weeks before black layer, Nielsen said.

When temperatures plunge below 28 degrees for several hours, however, the game changes.

“A true killing freeze stops everything dead in its tracks,” Nielsen said.

Because the plant is dead, no more dry matter will be pumped into the grain as the black layer slowly develops. Growers will be left with whatever yield was accumulated at that point. Research puts yield loss from a killing freeze at 55% at the soft dough stage, 41% at full dent and 12% at the half-milk-line stage, Nielsen said.

To top off the injury, growers can face a prolonged dry-down period, especially if the corn husks were still green when the freeze struck, Nielsen noted. “That husk tissue has to die and dry out before you can get any moisture coming out of the grain,” he said.

And because the rate of dry-down slows as temperatures cool in the fall, the wait can be even longer, Nielsen warned.

“In mid- to late-October in Indiana, the normal rate of dry down is 1/4-point a day,” he pointed out. Typically, an ear of corn in the dent stages can still be at 55% moisture; at black layer, it is still hovering around 30%.

“That’s why my biggest concern is that, even if we reach black layer in mid-October with freeze damage, we do not dry down very fast in October,” Nielsen noted.

Soybeans don’t have quite the stark ending to yield accumulation that corn does with black layer, nor as straightforward a maturity process, Naeve said. Soybean development is more influenced by the length of day, but at the end of the season, temperatures do play a role in pushing the plant toward maturity, he said.

“Cool weather, like we’ve had in Minnesota recently, does give them a cue that winter is coming, it’s time to wrap things up,” he said. “We tend to get really hurt from early freezes only when they come out of the blue — when you go from the 70s to freezing in a few days.”

While R7 is often considered physiological maturity for a soybean, research has shown that the plant can still accumulate yield into the R8 stage. “As long as there is still some green tissue, the plant is still photosynthesizing,” Naeve explained.

A guide from the University of Nebraska estimates that maximum dry matter accumulation has occurred in soybeans when a field is completely yellow, plants have lost 60% of their leaves, pods are 50% brown and the seeds are 60% moisture or lower and starting to shrink.

When a light frost descends before R8, yield losses are likely, but not necessarily severe. “A light frost will nip the top of the canopy — those leaves and pods at the top of the plant,” Naeve explained. “Even if we have a reversion of good weather, we’ve lost the top off our yield potential at that point.”

As long as some parts of the plant keep their green tissue after a frost, the plant will continue to photosynthesize for as long as it can and send nutrients from the leaves into the seed, he added. “It’s not going to accrue a lot of yield at that point, but it will still be alive for some time.”

In a hard freeze, the plant dies faster and has less time to remobilize nutrients into the seed. If this killing freeze hits after seeds have developed (R6), the soybeans will likely be smaller than average, and sometimes flat. Green soybeans are also common, as freeze-damaged plants don’t dry down well in the field, Naeve noted.

“Processors don’t like that because the chlorophyll in the seeds will end up in the oil when they process them and actually color the oil,” he explained. “So growers will take a hit at the elevator for green soybeans.”

The most damaging stage for yield loss for a soybean plant is if a freeze hits about halfway through R5, Naeve said. “R5.5 is the absolute worst for all major weather events like hail or a freeze,” he explained. “It will wipe out all the leaves, so there will be no more yield accrual, and since no seeds were developed yet, that’s where we can be devastated, yield-wise.”