Skip to main content
Home > News > Why So Many PP ‘Corn’ Acres?

Why So Many PP ‘Corn’ Acres? 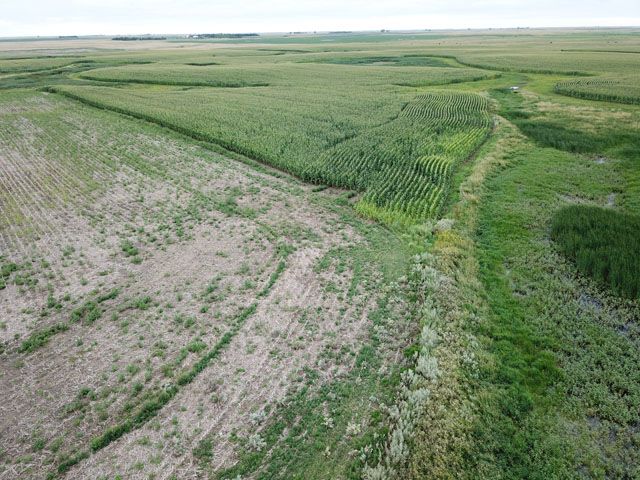 Where unusually heavy spring rain and flooding occurred, farmers were unable to plant crops on more than 19 million acres in 2019. (DTN photo by Elaine Kub)

Let’s say you had 1,000 acres of farmland in east central South Dakota (where a lot of these prevented plantings occurred this spring), and by the time it got too late to plant a crop with reasonable prospects, 20% of your acreage still wasn’t planted. To remain eligible for federally-supported crop insurance programs, by July 15 you needed to show up at your local Farm Service Agency office and draw out physical paper maps of what got planted where, and all the muddy low spots, sloughs and entire fields that didn’t get planted at all. Some people in some regions had an extended deadline to certify those acreage maps, but let’s not get hung up on the dates — just the math.

How should you report those unplanted wet spots on the map? Let’s say your 10-year Actual Production History (APH) yield was 160 bushels per acre (bpa) for corn and 46 bpa for soybeans (average for this region). The unplanted spots in your fields and on your maps are just bare dirt and blank page — nobody but you gets to say what intentions were in your heart when you set out to plant there. However, the crop insurance payout for unplanted corn (160 bpa x $4.00 = $640 revenue, times 75% of 75% or whatever the terms of your prevented plant insurance policy stipulates) is undeniably better for “corn” acres than “soybean” acres (46 bpa x $9.54 = $439, times 75% of 75%). The math is similar in west central Ohio, another region heavily affected by spring planting limitations this year, where the 10-year APH yields are typically something like 165 bpa for corn and 52 bpa for soybeans.

Therefore, that’s why a disproportionate share of PP acres was counted as “corn” acres. In the FSA’s summary released Monday, 12% of corn acres were reportedly prevented, versus 5% of soybean acres or 8% of all crop acres. The total prevented planting figure for all crops was an eye-watering 19.2 million acres — that’s five times the five-year average amount of prevented planting acreage.

But then, one might wonder, why didn’t every farmer everywhere say every inch of unplanted ground was intended to be “corn” ground? Why are there any PP soybean acres at all in FSA’s crop acreage data? Well, crop insurance policies typically limit a farmer’s payout on a given crop based on that farmer’s demonstrated history with that crop. Let’s say the maximum number of corn acres that the 1,000-acre farmer had ever previously grown in any one year was 650 acres. In 2019, he or she managed to plant 500 acres of corn and 300 acres of soybeans, leaving 200 acres unplanted. Only 150 of those unplanted acres can be allocated to the PP corn category (the 650 historical maximum minus the 500 actual) and the other 50 of the unplanted acres will then be shunted over to the PP soybean category (or whatever other crop makes sense). To complicate matters further, the numbers reported on FSA maps won’t necessarily match the numbers used by the crop insurance companies by the time these payouts are finalized.

Cumulatively, the end result is that the 2019 prevented acres reported to the Farm Service Agency — and therefore, the number of acres theoretically coming off of the World Agricultural Supply and Demand Estimates (WASDE) supply tables — may be only loosely related to what the original farmer intentions may have been. Those original intentions may have been motivated by similar math (relative profitability prospects for corn versus soybeans), but they may also have been motivated by crop rotation practices or livestock feeding plans or various other considerations. No one will ever really know what crop mix might have been planted if the rain hadn’t fallen in such catastrophic patterns.

Perhaps these numbers still seem a bit fishy to you. Ultimately, there’s a somewhat finite number of arable acres in the United States, right? The August WASDE report on Monday claimed that 90.0 ma of corn was planted in 2019. On the same day, the FSA acreage summary claimed 11.2 ma of intended corn was prevented from being planted (and 85.9 ma of corn was planted or planted-and-failed). I checked the sum of all the planted, plus planted-and-failed, plus prevented acres of barley, corn, cotton, oats, rice, sorghum, soybeans, sugar beets, sugarcane and wheat in 2019; it was 252.4 million, which is suspiciously 4 million acres larger than the total acreage reported in 2017, but it’s not unprecedented (252.7 million total acres were reported in these crops in 2015).

Questions remain. One big question: Of all the acres FSA counts as “planted acres (including failed acres),” how many of those acres have already failed or will fail before harvest? Put another way, no matter what number you want to use as the initial “planted” figure, what percentage or number of corn acres, especially in the grim Eastern Corn Belt, will actually get harvested for grain by the time this year is done?

Some of these questions may be addressed by aerial imagery and satellite data, like the data used in this week’s DTN Digital Yield Tour: https://spotlights.dtnpf.com/…

Other questions have answers that can be observed in the market data itself, although that’s currently just about as conflicted as the various government reports. The new-crop futures spread between the December 2019 and March 2020 corn contracts has widened since mid-June and traded at a rather bearish 12 1/2 cents Tuesday morning, suggesting commercial grain traders were feeling quite comfortable about receiving and storing abundant quantities of corn into 2020. Since that spread has continued to widen since the release of the latest WASDE report, I can only assume that traders are on board with the USDA’s numbers showing almost 2.2 billion bushels of ending stocks in the 2019-20 marketing year (a lavish 15.4% stocks-to-use ratio).

At the same time, however, old-crop basis bids in Ohio continue to shock: 50 cents over the nearby futures contract at several locations in the western half of the state. Similar supply panic can be seen in Ohio’s new-crop basis bids — already 5 cents over the December futures contract, or 15 cents over, or 20 cents over, depending where you look. So when we go out and “ground truth” the market in this year’s worst-hit regions, the reality of this year’s crop seems to conflict with the picture currently being painted by the USDA.