Skip to main content
Home > News > Will Pork Producers Have a Profitable Year?

Will Pork Producers Have a Profitable Year?

The pork outlook started this year on a downbeat, then in March and April markets recognized that African swine fever in China could cause global pork shortages and lean futures and industry optimism sailed upward. Summer lean futures exceeded $100, but cash prices could only reach the low $80s and futures came tumbling down. Then in June, hog numbers surprisingly surged nearly nine percent.

So, we are left with three key questions to sort out. First, what will happen to pork supplies in coming weeks and months? For that we will review the latest Hogs and Pigs report. Secondly, will U.S. pork exports grow by enough to support stronger prices? Third, how will feed costs impact profits?

Pork production was up four percent in the first-half this year, but the market did not see about nine percent more hogs coming to market in June. The latest Hogs and Pigsreport did pick up this large increase as producers told USDA that they had eight percent more hogs in the 180 pound or higher weight bracket in early June. These represented animals that came to market in June and early-July.

After the surge of hogs in June and early-July, the report indicates that market hog inventories then drop to three percent greater for all weight categories down to baby pigs. If so, this means that the surge in hog numbers should be nearing an end with numbers sliding closer to the three percent increase in coming weeks. With weights perhaps one percent higher, this means pork supplies in the second-half of the year will be about four percent above the same period last year.

Producers indicated they have expanded the breeding herd by one percent and that they intend to keep farrowings unchanged this summer and this fall compared to a year-ago. If so pork supplies would only rise about two to three percent in the first-half of 2020. The increase would be driven by greater pigs per litter and by heavier marketing weights.

Pork export growth may lead to stronger hog and pork prices even into 2020. USDA analysts now expect 2019 pork exports to be up 10 percent and another seven percent in 2020. Using USDA estimates, pork exports this year will reach 23.7 percent of U.S. production-a potential new record exceeding the 23.2 percent previous record in 2012. Further for 2020, their estimate is for exports to reach 24.6% of U.S. production, or nearly 25% of all pork production.

Leading the way is China who has once again been contracting for U.S. pork-most of that for this year is still unshipped. In 2017-the last calendar year before our trade conflicts, China purchased 23 percent of our U.S. pork export volume. That dropped to just 14 percent in 2018 with trade conflicts.

At mid-year 2019, China has commitments that represent 29 percent of our total pork export commitments. This makes China our biggest 2019 export customer at mid-year. Mexico is in second place with 26 percent of export sales.

Actual exports to China are expected to increase in coming months. Official Census data for January to April show the volume of exports to China was down 16 percent. However, May shipments were up 33 percent. Those large increases are likely to continue into the summer and hopefully into the fall given all the pork China has contracted.

However, all is not well for U.S. agriculture as trade issues with China continue to evolve. In recent days, Chinese authorities have suggested that their agricultural product purchases from the U.S. could be targeted for reductions if U.S. demands for intellectual property rights reforms are not lightened.

This ups the ante as China tries to increase their bargaining position by further threating more economic pain on U.S. agriculture. For pork it could mean that the aggressive purchases of U.S. pork in the past few months could quickly fade providing yet one more reason for weaker hog and pork prices.

Live hog prices were depressed in the first quarter this year when they averaged about $41, far below the $50 estimated costs for farrow-to-finish production. The sharp rebound in the second quarter to about $58 moved production back to strong profitability. Prices are expected to average on the upper side of the mid-$50’s in the third quarter 2019 and on the lower side of the mid-$50s in the last quarter.

Prices could be stronger in 2020 if supply growth remains moderate as currently expected and if exports expand as mentioned earlier. Live prices are expected to average in the mid-$50s for the first quarter of 2020 and then move upward toward $60 for the late-spring and summer.

Soybean meal prices at Decatur Illinois averaged $345 a ton in 2018 and are expected to drop to around $315 this year. At this writing, futures markets are only expecting a modest increase in cash meal prices for 2020 to around $325 per ton. Feed prices are likely to be volatile as there is uncertainty about planted acreage and final yields.

After estimated losses of about $12 per head in 2018, will hog producers make money in 2019? My answer is currently, yes, but that is only $2 per head. So, given all the uncertainties, profit does not seem assured. The current outlook is for stronger hog prices in 2020 that would provide estimated profits of $10 per head. 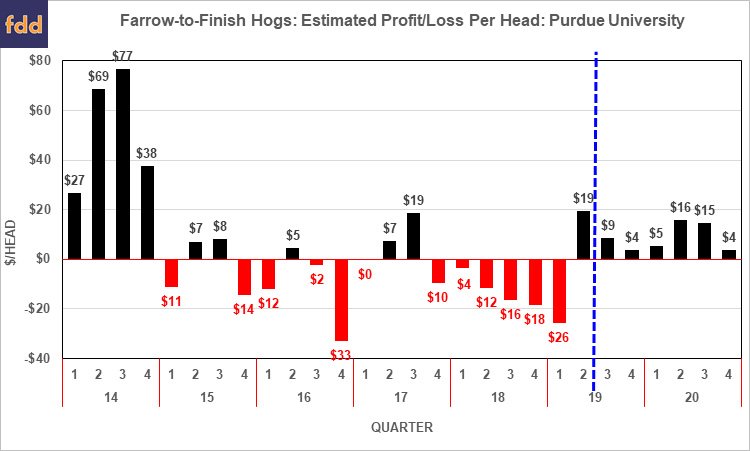 The pork industry outlook this year has already had multiple swings and uncertainties for the future remain large. The industry faces opportunities to export record volumes of pork, but also faces continued trade issues with China that could restrict the level of those pork export sales and shipments. Feed prices remain uncertain as markets and USDA get a better grip on planted acres and yields. Finally, hog producers say they are keeping breeding herd expansion at a low level, but there has been a recent tendency for expansion to be higher than indicated in Hogs and Pigs reports.