The Purdue University/CME Group Ag Economy Barometer rebounded in October to a reading of 136—a 22-point increase in the index compared to September—leaving the barometer nearly equal to its level one year ago. This month’s recovery in the barometer was underpinned by improved perceptions of both current conditions and future expectations as the Index of Current Conditions rose 19 points to a reading of 115 and the Index of Future Expectations rose 24 points to a reading of 146. Month-to-month shifts in barometer readings continue to be quite large as U.S. agricultural producers are buffeted by shifts in major commodity prices and news about trade negotiations with key ag trade partners. 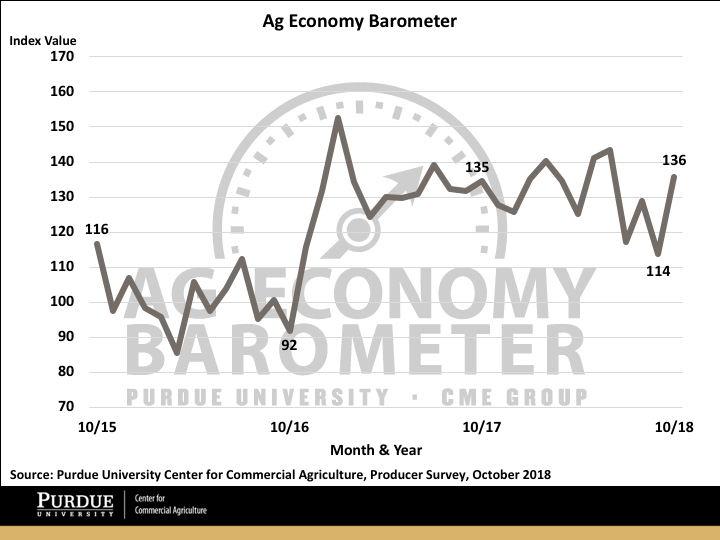 Although both current sentiment and future expectations rose in October, it is a relatively positive view of the future that is really underpinning the Ag Economy Barometer. This month’s Index of Future Expectations reading of 146 pushed the index back to the peak attained this past spring before the ag trade conflict with China erupted. In contrast the Index of Current Conditions, even with this month’s rebound, remains well below the levels recorded in winter and spring 2018. 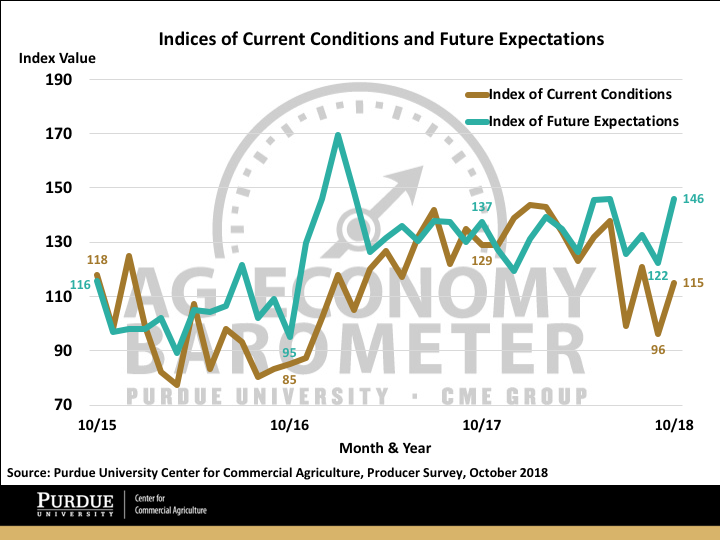 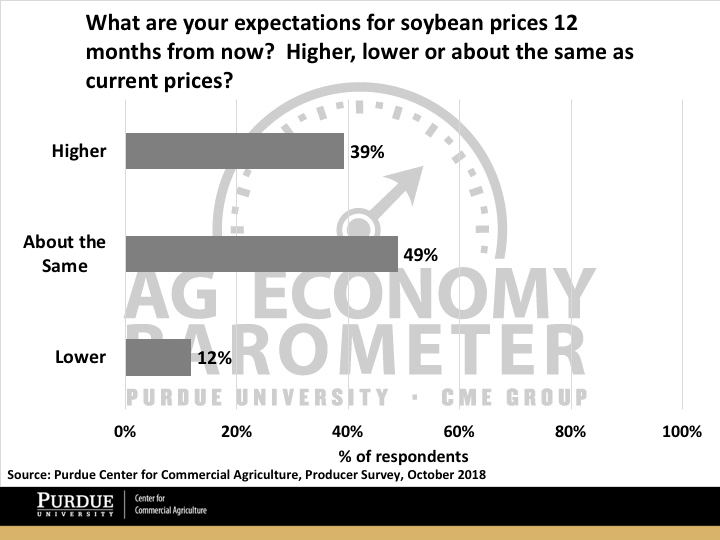 In early October, the Trump Administration announced that a new trade agreement, referred to as the U.S.-Mexico-Canada Agreement, had been reached. Although the trade agreement will not actually go into effect until the U.S. Congress and legislatures in both Mexico and Canada approve it, we wanted to learn how producers viewed the pending agreement. On the October survey, we asked producers to what extent the agreement relieved their concerns about farm income in the upcoming year. Results were mixed. Over 60 percent of producers said the agreement at least somewhat relieved their farm income concerns, whereas 25 percent of producers said it did not relieve any of their concerns. 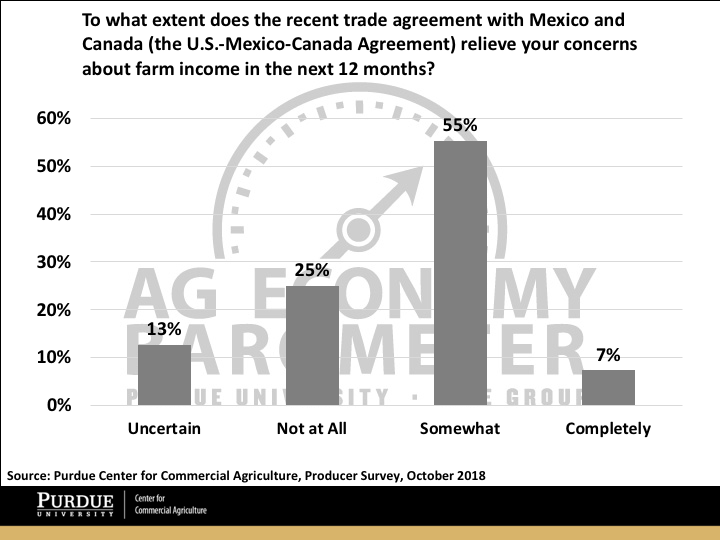 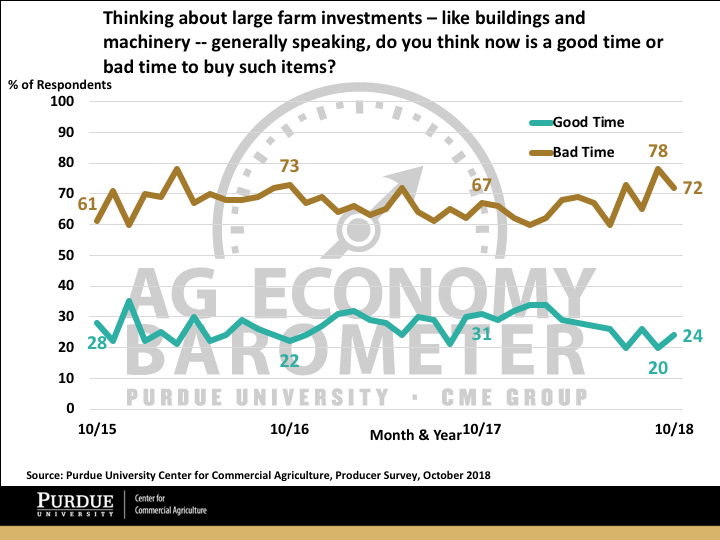 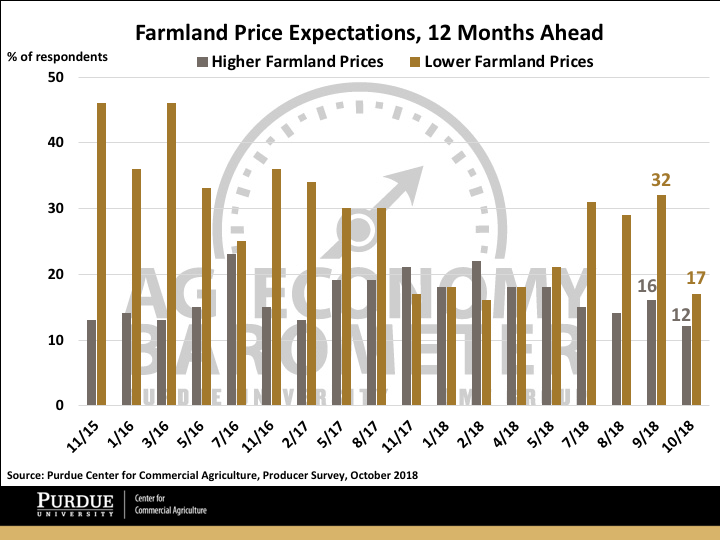 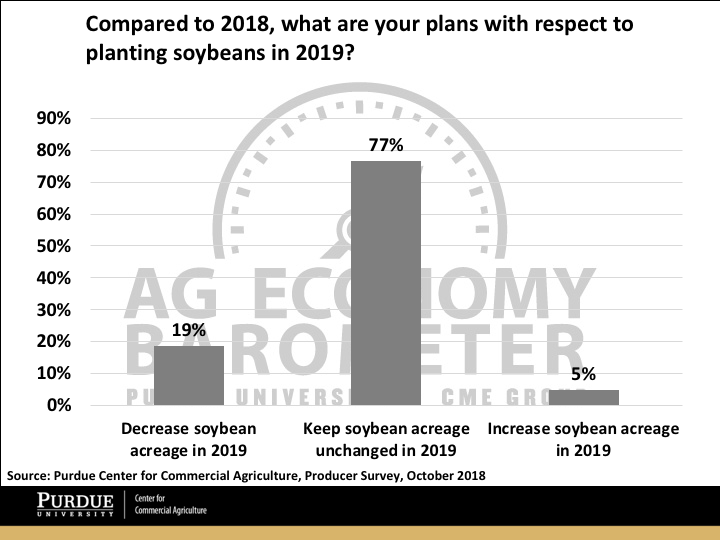 The October reading of the Ag Economy Barometer rose 24 points compared to September as farmers’ perspectives on future and current conditions improved. However, producers’ perspectives on current economic conditions remains much weaker than it was early this year, before major trade conflicts erupted. In contrast, producers had a much more positive view of the future than they did this summer as the Index of Future Expectations climbed back to a level last seen in spring 2018, before commodity prices weakened substantially. Producers sanguine view of the future was at least partially motivated by expectations that crop prices a year from now would be higher than they are now. Producers’ attitudes about making large farm investments improved during October, but they remain cautious about making large investments when compared to their attitudes last winter and spring. Farmers were less pessimistic in October about the short-run outlook for farmland values as the percentage of respondents expecting lower values 12 months out declined. However, fewer farmers said they expect to see higher farmland values 12 months from now and there was an even sharper drop in the percentage of producers who said they expect to see higher farmland values five years from now. Looking ahead to early 2019 planting intentions, nearly one out of five farmers who grew soybeans in 2018 said they plan to reduce their soybean acreage next year. Among those who plan to reduce their acreage, two-thirds said they plan to reduce their soybean acreage by more than 10 percent.