On Monday, the Federal Reserve Bank of Dallas released its Agricultural Credit Survey for the first quarter of 2018.

The Fed update indicated that, “Bankers responding to the first-quarter survey noted conditions remained dry across a number of regions. Winter wheat conditions declined as a result. Lack of moisture limited pasture grazing of cattle in some regions. More cotton acres are expected this year in a couple regions.” 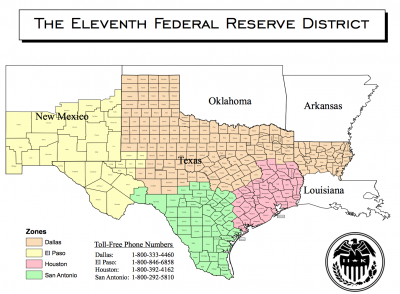 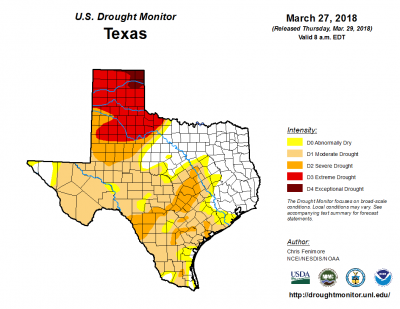 “According to the USDA, 65 percent of wheat in Texas was in poor to very poor condition while 72 percent of topsoil moisture across the state was short to very short. Moderate and Extreme drought was expanded in central and parts of southern Texas.” United States Drought Monitor (March 29, 2018). 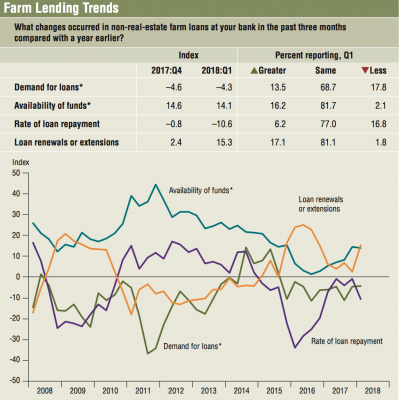 The anticipated trend in the farmland values index remained positive for a fourth consecutive quarter, suggesting respondents expect farmland values to trend up in the upcoming months. 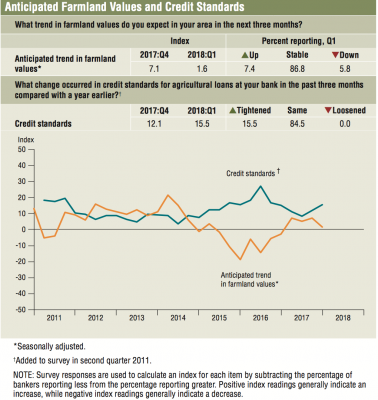 Also on Monday, the American Bankers Association (ABA) released a report (“2017 Farm Bank Performance Report“) which stated, “The U.S. Department of Agriculture (USDA) is forecasting net farm income to decline to $59.5 billion in 2018.

Farm banks are well-prepared for possible turbulence in the agricultural sector. Farm banks have benefited from several years of strong agricultural sector performance and have, during these years, increased their quality and quantity of capital while strengthening their balance sheets.

More specifically, the ABA update stated, “Farm lending posted solid growth during 2017. Total farm loans at farm banks increased by 5.9 percent to $106 billion in 2017, up from $100 billion in 2016. Over one in every three dollars lent by a farm bank is an agricultural loan.” 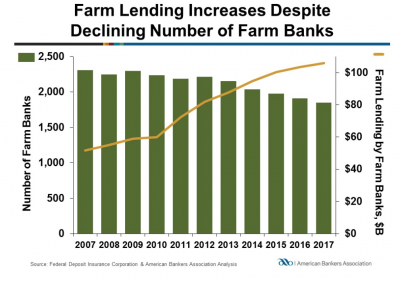 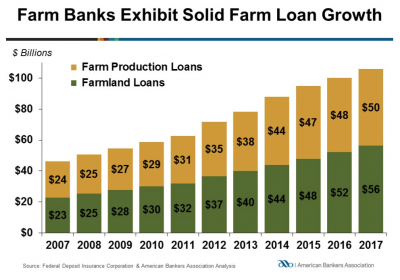 The ABA report added, “One area of concern for farm bankers and their supervisors has been the appreciation in farmland values in some areas of the country. In addition, the Federal Reserve’s monetary policy, known as Quantitative Easing, has spurred asset prices, including farm land. However, the run up in farmland values has not been a credit driven event. Farm banks are actively managing risks associated with agricultural lending, and underwriting standards on farm real estate loans are very conservative. The key consideration of farm bankers is the ability of their farm customers to repay debts regardless of their collateral position. To help manage risk, farm bankers regularly run stress tests on their customers’ portfolios to evaluate the health of borrowers under different adverse scenarios.

“Furthermore, according to Federal Reserve surveys, after several years of large increases in farmland values, farm bankers have indicated that farmland values have edged down from recent peaks in several states while year-over-year value gains have moderated in others.

Meanwhile, Tom Meersman, in an article on the front page of the business section in Wednesday’s Minneapolis Star Tribune, reported that, “Minnesota farmers saw thin profits in 2017 for the fifth consecutive year, with one-third of them losing net worth and median farm income down again compared with 2016.

“‘There is a lot of slow bleeding going on out there,’ said University of Minnesota Extension economist Dale Nordquist, who worked on the latest analysis of farm finances. ‘It becomes a crisis for some individual farms who don’t have a strong enough balance sheet to withstand this extended downturn.’” 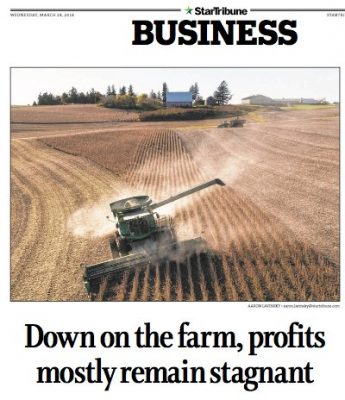 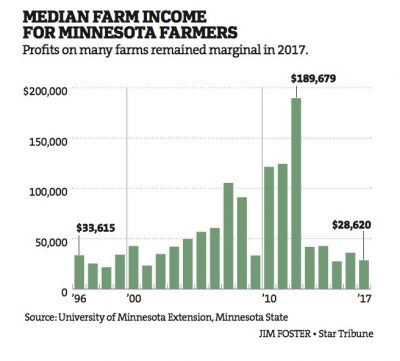 Last week’s article also explained, “Net median income for crop growers dropped by half between 2016 and 2017 to about $24,000, despite near-record yields.

“‘It seems like a lot of producers have been treading water these last few years, waiting for something to happen to improve prices,’ said Aaron Brudelie, farm management instructor for Minnesota West Community and Technical College.

“On the brighter side, prices have improved slightly in the past few weeks because of weather and production problems in South America, he said.”