The departure of Scott Pruitt, the scandal-plagued former head of the Environmental Protection Agency, means that the agency will be led in the coming months by Mr. Pruitt’s deputy, Andrew Wheeler, a former coal lobbyist who shares Mr. Pruitt’s zeal to undo environmental regulations.

But unlike Mr. Pruitt — who had come to Washington as an outsider and aspiring politician, only to get caught up in a swirl of controversy over his costly first-class travel and security spending — Mr. Wheeler is viewed as a consummate Washington insider who avoids the limelight and has spent years effectively navigating the rules.

For that reason, Mr. Wheeler’s friends and critics alike say, he could ultimately prove to be more adept than his controversial former boss in the job.

“Many worry Wheeler will be more effective at implementing Trump’s anti-environmental agenda than Pruitt was,” said Paul Bledsoe, a former Clinton White House climate adviser, in the wake of the departure.

On Thursday afternoon, President Trump tweeted that he had accepted Mr. Pruitt’s resignation and that Mr. Wheeler would take over as acting director of the agency. Mr. Wheeler is expected to serve in an acting capacity as head of the E.P.A. until President Trump nominates a new agency chief, who must then be confirmed by the Senate. That process could take months and potentially stretch past the November midterm elections.

It is possible that Mr. Trump could nominate Mr. Wheeler to the top job. However, several other names have also been mentioned as possible successors to Mr. Pruitt, including Donald Van der Vaart, a former senior environmental official in North Carolina. Mr. Pruitt selected him to serve on an E.P.A. scientific advisory board.

In a June interview with the Washington Examiner, Mr. Wheeler said he had no interest in taking over his boss’s job. “I could have put my hat in the ring for the administrator. I wasn’t interested in that. I am still not interested in that,” he said.

Mr. Wheeler will now step in as the acting chief of an agency that has been central to President Trump’s signature campaign promise of stripping away regulation.

During Mr. Pruitt’s tenure, the former Oklahoma attorney general gained headlines for his aggressive push to roll back dozens of regulations governing clean air and water, and fighting against Obama-era rules focused on limiting carbon emissions. In recent months, however, Mr. Pruitt’s policy efforts were overshadowed by a running stream of alleged ethics violations.

Mr. Wheeler tends to eschew the limelight, his colleagues said. His career was built around quietly and incrementally advancing the interests of the fossil-fuel industry, chiefly by weakening or delaying federal regulations.

Mr. Wheeler has worked in Washington for more than 20 years. He is a former chief of staff to Oklahoma Senator James Inhofe, the conservative Republican who has become known as Washington’s most prominent denialist of the established science of human-caused climate change. 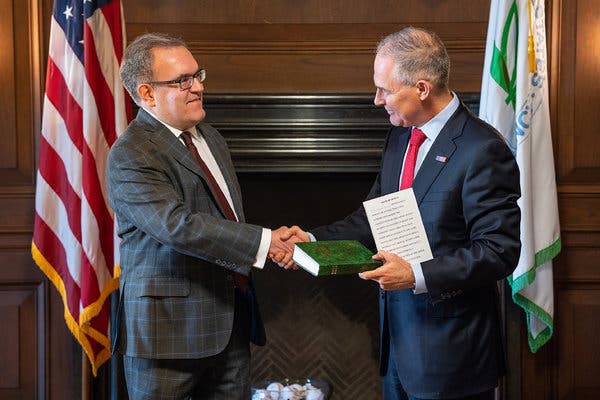 Mr. Wheeler, left, with Mr. Pruitt, during his swearing-in as deputy administrator in April. Mr. Wheeler had recently been a lobbyist for the coal company Murray Energy.CreditU.S. Environmental Protection Agency

Mr. Wheeler also worked at the E.P.A. during the administration of the first President George Bush. More recently, he lobbied for the coal company Murray Energy, whose chief executive, Robert E. Murray, has been a supporter and adviser of Mr. Trump’s.

Environmentalists see in Mr. Wheeler a powerful ally of polluting industries and enemy of clean air and water. “Like Pruitt, this veteran coal lobby lobbyist has shown only disdain for the E.P.A.’s vital mission to protect Americans’ health and our environment,” said Ana Unruh Cohen, managing director for government affairs at the Natural Resources Defense Council, an advocacy group.

Mr. Wheeler has appeared to embrace criticism from the left that he is an ally of fossil fuels, according to email exchanges obtained by the Sierra Club under a Freedom of Information Act request. Last October, soon after Mr. Wheeler was nominated to his position as deputy director, he sent an email to Mr. Pruitt’s chief of staff, Ryan Jackson, a longtime friend, with a headline from The Onion, the satirical publication: “EPA Promotes Pulsating Black Sludge to Deputy Director.”

“Welcome, pulsating black sludge,” Mr. Jackson responded. “I guess I’m going to have to get the cleaning crews to come in more often.”

Washington insiders describe Mr. Wheeler as well positioned to pursue Mr. Trump’s agenda as effectively as Mr. Pruitt, or even more so, by moving more slowly but in ways likelier to withstand legal challenge.

“Andrew is one of the most well-known, well-respected policy professionals in Washington on energy and environment — he knows everybody,” said Matthew Dempsey, a former colleague of Mr. Wheeler’s in Mr. Inhofe’s office, who currently works for a consulting firm representing the oil and gas industry.

“He will be similar to Pruitt in terms of the agenda — he understands the Trump administration and will carry out the agenda,” said Mr. Dempsey. “But he’s been around Washington a long time. He knows how D.C. works and he does things by the book.”

The departure of Mr. Pruitt, a former protégé of Mr. Inhofe’s, and rise of Mr. Wheeler represents the powerful influence of Mr. Inhofe on the Trump administration’s environment policy. Mr. Inhofe had long championed Mr. Pruitt’s political career, and it was speculated that Mr. Pruitt would one day run for Mr. Inhofe’s Senate seat in Oklahoma.

Mr. Wheeler is one of a group of former Inhofe staff members, loosely known as the “Inhofe mafia,” who now work in energy and environment policy positions across the Trump administration and in top Washington lobbying firms.

Mr. Inhofe cheered Mr. Wheeler’s arrival at the E.P.A. earlier this year. “Andy Wheeler is the most competent and qualified person for the job he’s been asked to fulfill,” Mr. Inhofe said.

Mr. Wheeler’s rise also represents a victory of influence for another of his former bosses, the coal magnate and Trump adviser Robert Murray.

A few weeks after Mr. Trump’s inauguration, Mr. Murray, who contributed $300,000 to Mr. Trump’s inauguration fund, presented the president with a wish list of regulations that he wanted to see lifted from the coal industry. In particular, Mr. Murray has pushed Mr. Trump to undo President Barack Obama’s regulations designed to curb planet-warming pollution from coal-fired power plants, a leading cause of global warming. Mr. Trump then assigned Mr. Pruitt to roll back those rules.

Like Mr. Trump, Mr. Inhofe and Mr. Pruitt, Mr. Wheeler has questioned the established science of human-caused climate change. In 2010, Mr. Wheeler criticized the United Nations Intergovernmental Panel on Climate Change, the world’s leading scientific authority on global warming, writing in a blog post that it has “has functioned more as a political body than a scientific body.”

However, some Democrats have offered at least modest praise of Mr. Wheeler — as he himself noted in another email exchange with Mr. Jackson.

After his November confirmation hearing, Mr. Wheeler emailed Mr. Jackson. “Everyone seemed to think I did a really good job, including Inhofe, Capito and Mr. Murray. Carper and Cardin both said really nice things about me,” he wrote.

He was apparently referring to Democratic Senators Thomas Carper of Delaware and Ben Cardin of Maryland, both of whom are advocates of strong environmental regulations, and Senator Shelley Moore Capito, the Republican from West Virginia, who is one of Washington’s strongest advocates for the coal industry.

While it is likely that Mr. Wheeler, as the acting E.P.A. chief, will be effective in implementing Mr. Trump’s deregulatory agenda, one potential obstacle to his being nominated by the president to fill the job permanently is his record of opposing Mr. Trump during the presidential campaign. In a Facebook post on February 29, 2016, Mr. Wheeler penned a strong critique of Mr. Trump that has since been deleted.

“If you are considering voting for Donald Trump please think about the following: 1) no one really knows what his political beliefs are, he has donated to both parties over the years and to people with completely different views. 2) he has demonstrated through the debates and interviews that he doesn’t understand how government works,” he wrote. Mr. Wheeler’s post also suggested that, as a businessman, Mr. Trump “really hasn’t been that successful.”