“Tariffs on $34 billion of Chinese goods are scheduled to take effect at 12:01 a.m. in Washington, the U.S. Trade Representative confirmed in an email Thursday. The milestone marks a new and damaging phase in a conflict that has roiled markets and cast a shadow over the global growth outlook.

In Beijing, policy makers are digging in for what could be a protracted fight — one in which they say they won’t be the aggressor. Beijing has said retaliatory tariffs on U.S. goods ranging from soybeans to pork will go into effect immediately after the U.S. acts. 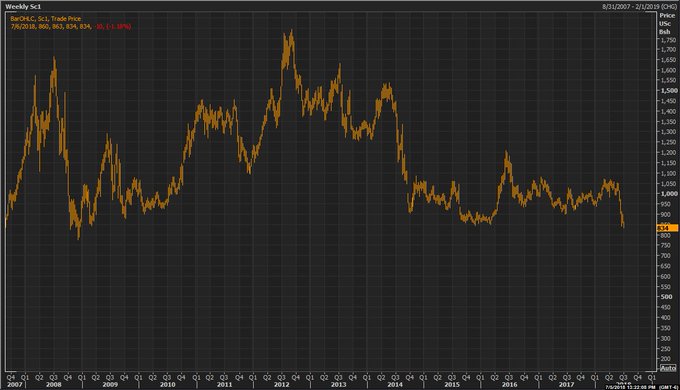 As Chinese tariffs loom, CBOT soybeans end at near decade low of $8.34 per bushel

The Journal article noted that, “Beijing said it plans to introduce tariffs on U.S. soybean imports starting Friday, part of a package of measures retaliating against the Trump administration’s own threatened duties against hundreds of billions of dollars worth of Chinese goods. Soybean buyers in China—the world’s largest consumer of oilseed, which gobbles up around a third of all the U.S.-grown crop—have sharply slowed their purchases in anticipation of the duties.”

And Mr. Parkin added, “Researchers at the University of Illinois and Ohio State University estimate that Chinese tariffs of 25% on U.S. soybean imports would cut income for a midsize Illinois grain farm by an average of 87% over four years, prompting a loss of more than $500,000 in the farm’s net worth by 2021.”

Additionally, the July edition of the AMIS Market Monitor, which was released Thursday, stated that,

Nearby future contract prices for maize, soybeans and wheat have declined between 10-15 percent since June 1 reflecting, in part, the uncertainty hanging over markets due to impending tariffs.

“While many agricultural commodities are potentially affected, probably none more so than soybeans.”

The Market Monitor went on to explain that, “The impact on grain flows will likely be negligible over the next few months. That is because the Southern hemisphere typically supplies China from May until September when the US crop begins to be harvested. But already the impact of the proposed actions can be felt. Brazil reported record soybean exports to China for April and May, further exacerbating congestion and delays in ports already adversely affected by labor strikes.

The larger impact will be felt, however, when the US crop is harvested, which this year is likely to be a near-record. Exports from the United States that would have normally gone to China will likely be diverted to other markets, potentially displacing more traditional suppliers.

“To meet their protein needs, China will attempt to source soybeans or other oilseeds from Brazil, Argentina and other suppliers such as Ukraine. This will tend to bid up prices of non-US supplies relative to soybean prices in the United States; as it is evidenced already, making US soybeans priced attractively for processors in South America. Indeed, the US Department of Agriculture reports that Argentina has recently purchased 540,000 tonnes of US new crop soybeans to help meet crushing needs caused by this year’s drought-affected crop in that country.”

Argentina #imports US #soybeans for the first time in over two decades due to drought induced shortfall. http://ow.ly/BiAp30kgekN

Along these lines, Bloomberg writer Tatiana Freitas reported Thursday that, “Brazil, the world’s biggest soybean exporter, may import as much as 1 million metric tons from its main rival in global sales in a twist of the topsy-turvy trade row between the U.S. and China.

“As American soybean shipments to China ease, they’re being discounted. At the same time, rising demand for Brazilian beans has exports fetching a premium, leaving reduced supplies for domestic processors. That means some buyers in Brazil may need to rely on farmers in Iowa rather than Mato Grosso.” 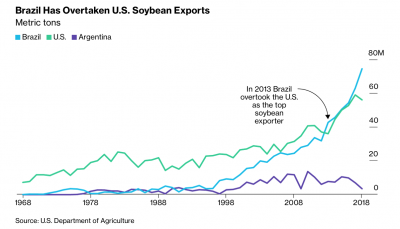 Likewise, a separate Bloomberg article Thursday written by Isis Almeida and Tatiana Freitas stated that, “Brazil could even consider importing soybeans at a cheaper price than it exports them, said Andre Pessoa, head of Agroconsult in Sao Paulo.” 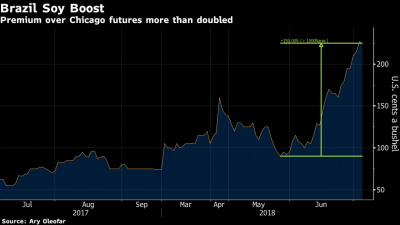 “As U.S. soybean prices slid, the premium Brazilian beans command over futures in Chicago has already doubled. To take advantage of that, Brazil may seek to import cheaper supplies from elsewhere, either for domestic crushing or re-export, Pessoa said.”

Beyond the possibility of U.S. soybean exports to Argentina and Brazil, Bloomberg writers Isis Almeida, Megan Durisin, and Marvin G Perez noted earlier this week that, “On the other hand, expensive Brazilian supplies could allow the U.S. to gain market share in Europe. The U.S. could become the top soybean supplier to the EU next season, according to Rabobank.” 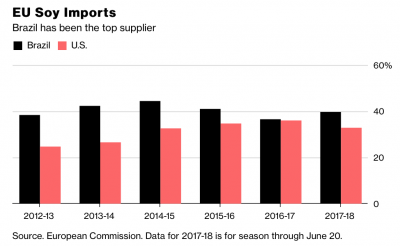 Meanwhile, Emiko Terazono reported on Wednesday at The Financial Times Online that, “Chinese buyers of soyabeans, such as state-owned Cofco, have already turned to Brazil as an alternative to the US for supply of the livestock feed. Soyabeans are one of the commodities targeted by Beijing as a retaliation against US import duties.

“However, producers of canola, or rapeseed — another oilseed that can be crushed and fed to livestock — may also prove winners. Even before the flaring of trade tensions with the US, China had been buying more canola. The country bought about 4.8m tonnes of canola last year, up a third from 2016, with the bulk coming from Canada, the world’s largest exporter.” 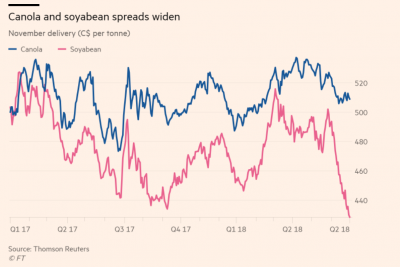 The FT article stated that, “Although canola imports are just a fraction of China’s soyabean purchases, which totalled 95m tonnes last year, hopes of further buying has been enough to hold the Canadian canola price firm. ICE canola for November has risen almost 3 per cent since the start of the year to C$506 per tonne, with the premium over soyabeans more than doubling to more than C$85 per tonne.”

And Bloomberg writers Megan Durisin and Sam Dodge reported on Thursday that, “China may also substitute some of its soybean demand by using canola or rapeseed meal in animal feed, according to Bloomberg Intelligence.”