Wall Street Journal writer William Mauldin reported on Monday that, “President Donald Trump on Monday sought to use his threat to slap tariffs on steel and aluminum imports as leverage to extract concessions from North American trading partners, while his party’s congressional leaders worked to derail a proposal that they said could spark a trade war.

“Mr. Trump upset U.S. allies and trading partners last week by saying he would impose tariffs on steel and aluminum imports from around the world. Trump administration officials have said no nation would be exempted from the duties, and on Monday the president signaled he would use those planned imports duties to pressure Canada and Mexico in negotiations over the renewal of the North American Free Trade Agreement, or Nafta.”

We have large trade deficits with Mexico and Canada. NAFTA, which is under renegotiation right now, has been a bad deal for U.S.A. Massive relocation of companies & jobs. Tariffs on Steel and Aluminum will only come off if new & fair NAFTA agreement is signed. Also, Canada must..

…treat our farmers much better. Highly restrictive. Mexico must do much more on stopping drugs from pouring into the U.S. They have not done what needs to be done. Millions of people addicted and dying.

“Many lawmakers agree with Mr. Trump that the pact has major flaws that need to be addressed, but few if any on Capitol Hill want to withdraw from the deal without having an immediate replacement.” 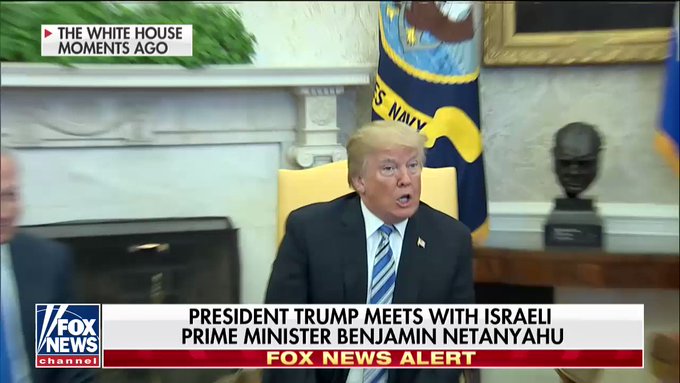 .@POTUS on tariffs: “We’re not backing down.”

Bloomberg writers Eric Martin and Andrew Mayeda reported on Monday that, “Trump’s plan to impose stiff tariffs on steel and aluminum is overshadowing talks to overhaul the North American Free Trade Agreement. The president’s intervention may complicate a process that had already been yielding little progress on the most contentious issues.”

The Bloomberg writers added that, “Until recently, the U.S. probe into the national-security risks of steel and aluminum has been considered separate from the Nafta discussions. Over the weekend, Trump advisers gave no indication that any countries would be excluded from the tariffs.” 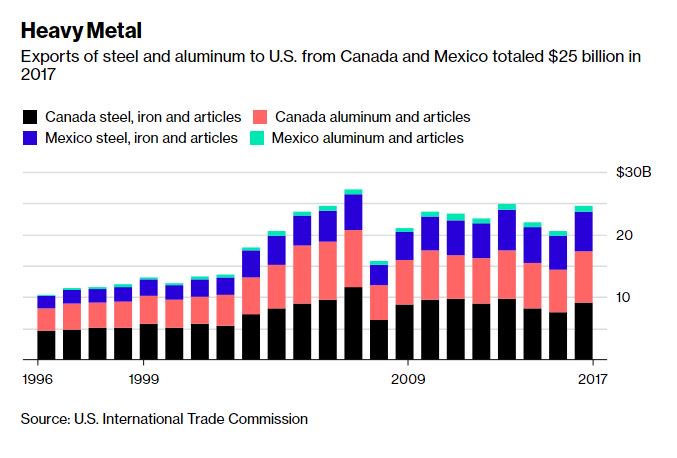 Canada has the most to lose among Nafta partners if Trump presses ahead with steel and aluminum tariffs https://bloom.bg/2FrANLG

Also on Monday, Reuters writers Susan Cornwell and Ayesha Rascoe reported that, “Trump’s determination to push ahead with a 25 percent tariff on steel imports and a 10 percent duty on aluminum has prompted threats of retaliation from the European Union, Canada, China and Brazil among others.”

A recent update at FarmPolicyNews focused on the potential dangers of Chinese retaliation that targeted agricultural products, like soybeans, and Bloomberg writer Alan Bjerga reported last week that, “U.S. soybean farmers are concerned at the prospect of retaliatory trade measures from China, which has become the biggest buyer of American bulk farm products. But there’s already one category of U.S. agricultural goods that China is buying less of: lightly processed, or ‘intermediate’ items that lie between raw commodities and finished consumer products.

That’s mainly due to China’s shunning of U.S. Distiller’s Dried Grains, an ethanol byproduct fed to cattle, and falling demand for animal hides. China, the biggest buyer of intermediate farm goods in 2015, now lags behind Mexico and Canada. 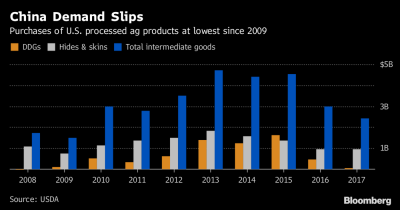 Meanwhile, Rachel Bade and Doug Palmer reported on Monday at Politico that, “Congressional Republicans are frantically lobbying President Donald Trump to reconsider his move to slap tariffs on steel and aluminum — even considering legislative action to try to stop him if he refuses.

“Speaker Paul Ryan has personally spoken with the president and tried to warn him of the economic dangers of entering a trade war as well as the political backlash that could crush Republicans in the mid-terms elections. Republicans fear that voters could pay the price in the form of higher prices, completely undercutting their central campaign message of an improving economy.”

Tariffs and trade wars are a loser for the American people, driving up costs on working families. Kansans and our agriculture sector that’s already seen its income cut in half over the last half decade will be hit especially hard. @POTUS should reconsider this course of action.

The Politico article noted that, “Republicans are still hopeful they can persuade Trump to change course. After all, they’ve had success doing so on immigration and guns in the past few weeks.

“But if that doesn’t work, Republican could consider congressional action to rein Trump in — though senior Republican sources would not specify what that would look like. Such a move would be unprecedented — particularly because Congress in recent years has deferred to the executive branch on matters of trade.”

In more detailed reporting on the closing of the seventh round of NAFTA renegotiations on Monday in Mexico City, Adam Behsudi reported on Monday at Politico that, “U.S. Trade Representative Robert Lighthizer warned on Monday that the United States is prepared to break up NAFTA into separate agreements with Canada and Mexico if it can’t make headway on its priorities in the renegotiation.

‘We would prefer a three-way, tripartite agreement. If that proves impossible, we are prepared to move on a bilateral basis if agreement can be made,’ Lighthizer said at the close of the seventh round of talks Monday in Mexico City.

Nonetheless, Ambassador Lighthizer added that, “We are prepared to work continuously to achieve a breakthrough.  I understand that these talks are not easy for anyone.  Each of us has our own political concerns.  But we are at the point where we have very important decisions to be made.  If the political will is there, I am certain that we have a path to a rapid and successful conclusion.”

Also on the NAFTA issue, a news release Monday from Rep. Adrian Smith (R., Neb.) stated in part that, “NAFTA has done great things for Nebraska agriculture, and I have appreciated the opportunity to bring the voices of our producers and manufacturers to the table in both Montreal and Mexico City. I’m optimistic we can strengthen the agreement while sustaining the gains already achieved.”

Everyone is staying at the #NAFTA negotiating table and working through the details, demonstrating the commitment of all three countries to keep this crucial agreement in place. Read more about our #trade delegation to Mexico City: https://adriansmith.house.gov/press-release/smith-continues-nafta-advocacy-mexico-city …

And, Brianne Pfannenstiel reported on Monday at The Des Moines Register Online that, “Iowa Gov. Kim Reynolds said Monday that ending the U.S. trade agreement with Canada and Mexico, the state’s top export markets, would have ‘devastating’ effects on the state’s farmers and manufacturers. 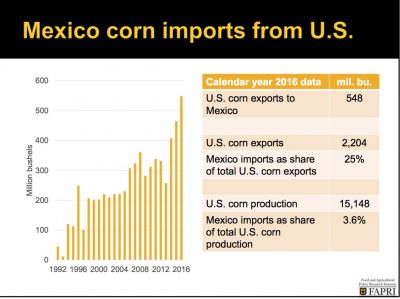 “‘I’ve said I’m OK with modernizing NAFTA,’ Reynolds said during her weekly press conference. ‘It’s a 25-year-old-plus trade agreement, so that makes sense. But I am not in favor of withdrawing. The impact that that would have on our state … would be devastating.’”