Last week, Financial Times writer Emiko Terazono reported that, “The wheat market is feeling the heat, with key global producers sweating over a drought that has curbed output. After several years of bumper harvests, the wheat market is poised to tighten sharply as Russia, Australia and EU countries contend with scorching temperatures. 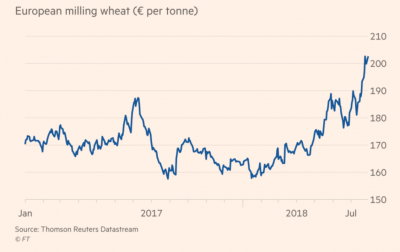 “Drought turns up the heat on wheat producers,” by Emiko Terazono. The Financial Times (July 30, 2018).

“In Australia, the state of New South Wales has announced a A$500m aid package for struggling farmers, while Germany’s farming association has called for €1bn in financial assistance from federal and state authorities.

The FT article noted, “Europe’s wheat production is forecast to fall below 130m tonnes for the first time in six years, according to Strategie Grains, while the German harvest has been downgraded to about 20m tonnes, the lowest since 2003. The consultancy sees further downgrades in the near future.” 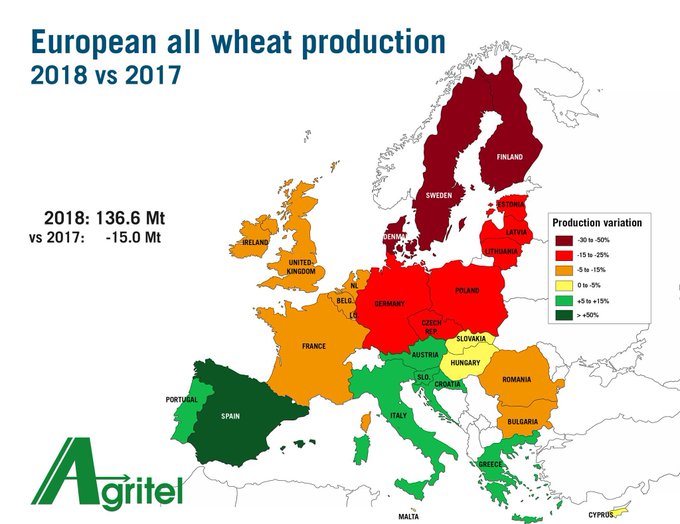 Ms. Terazono added, “Output for Ukraine has also been hit by the poorer harvests, while leading producer Russia is expected to see a sharp fall in production. As a result, the International Grains Council downgraded its wheat production forecast for the 2018-19 crop year to 721m tonnes, a five-year low. Meanwhile, end-of-the-year inventories, which act as a buffer against unexpected shortfalls, are predicted to decline 7 per cent, falling for the first time since 2011.” 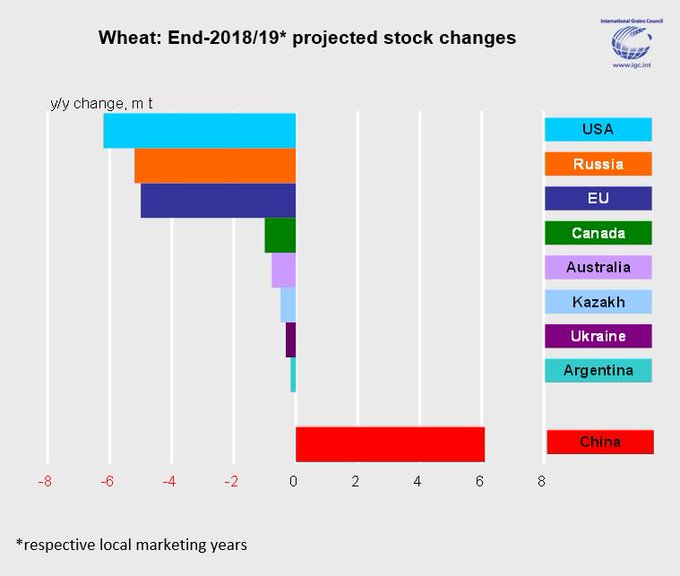 Led by a drop in major exporters, world #wheat stocks at the end of 2018/19 (aggregate of respective local marketing years) seen falling for the first time in six years, down 18m t y/y, but still the second largest on record, with nearly half is estimated to be in China.

On Wednesday, Bloomberg writers Phoebe Sedgman and Alfred Cang reported that, “Drought in Australia is sending local wheat on a rally that’s beating gains in global prices, which are being driven by dryness and soaring temperatures in Europe and the Black Sea.” 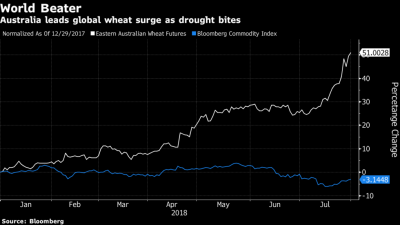 The Bloomberg article pointed out that, “Australia in June predicted wheat production at 21.9 million metric tons, about 3 percent bigger than last year’s harvest, which was the smallest in a decade. National Australia Bank Ltd. warned last month that output could fall below 20 million tons due to ‘tough’ conditions in many parts of the country.” 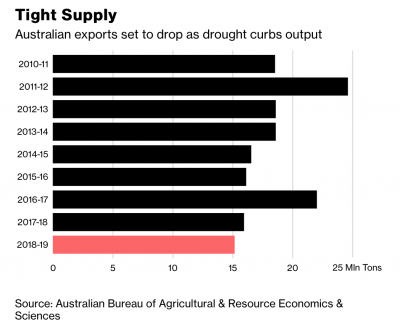 Also with respect to Australia, see this Friday update from Reuters graphics which stated, “The worst drought in living memory is sweeping parts of eastern Australia, leaving farmers struggling to cope and asking questions about the future.” 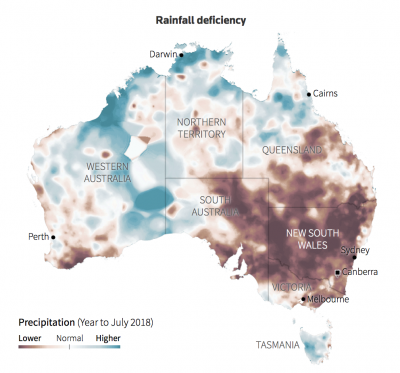 Reuters News reported Monday that, “Australia’s east coast received some respite from drought on Monday after the heaviest showers in weeks, but analysts warned any relief would be temporary without heavier rains.”

The article indicated that, “Reacting to the crisis, the European Commission said on Thursday it would speed up payments to farmers hit by extreme drought and allow them to use fallow land that normally would not be used for production to feed their livestock.” 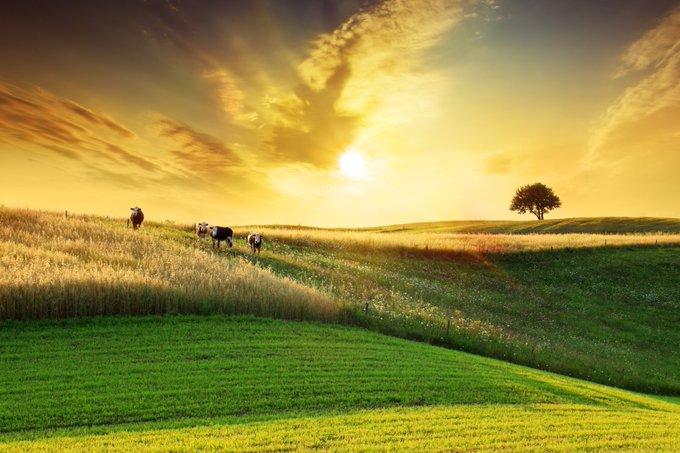 More info on all support: http://europa.eu/!vf38FF

In addition, Bloomberg writers Volodymyr Verbyany and Isis Almeida reported late last week that, “Wheat prices spiked, reaching a three-year high, and then shot back down after Ukraine sowed confusion in the market with conflicting statements on possible export limits.” 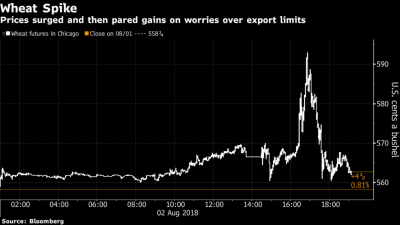 “Ukraine, the world’s fifth-largest exporter, first issued a statement on Facebook saying it plans to limit shipments of milling wheat after a droughtwrecked European crops. The ministry later sought to clarify its position, explaining that it’s not discussing ‘strict limits’ and will discuss projected shipment volumes with traders.”

And Wall Street Journal writers David Hodari and Benjamin Parkin reported on Saturday that, “Global wheat prices have soared to multiyear highs as a heat wave sweeping across Europe and Asia slashes forecasts for this year’s harvest.

The price rise could potentially provide some relief to North American farmers, who have largely avoided such scorching weather, just as Chinese tariffs sap demand for other crops like soybeans.

“Chicago wheat futures hit three-year highs Thursday, while a key European benchmark topped a four-year high. The price of Paris-traded milling wheat has leapt 33% so far this year. That is already translating into more expensive animal feed in some regions and could eventually mean more expensive bread.” 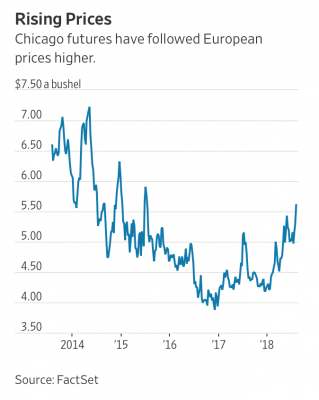 The Journal article stated, “Hot temperatures and drought typically stunt the growth of cereals and reduce their quality. With this in mind, the U.S. Department of Agriculture has forecast that global wheat stockpiles will fall for the first time since 2013.”

The Journal article noted that,

‘There is no end to the dire EU drought,’ research firm AgResource Co. said in a recent note. ‘The bull story in world wheat is just unfolding.’

“Less wheat from other parts of the world is a boon for U.S. and Canadian exporters, who are expected to produce better crops this year. The ratio of global grain supply, both wheat and corn, relative to demand has never been lower, AgResource said.”