On Saturday, House Ag Committee Chairman Mike Conaway (R., Tex.) delivered a speech to the Texas and Southwestern Cattle Raisers at their 2018 Convention in Ft Worth.  And on Monday, House Ag Committee Ranking Member Collin Peterson (D., Minn.) was a guest on the Adams on Agriculture radio program.  In their respective remarks, both lawmakers discussed Farm Bill issues and the SNAP program.  Today’s update includes a summary of the key points made by the top lawmakers on the House Ag Committee.

Ron Hays, of The Oklahoma Farm Report, posted an audio recording of Chairman Conaway’s remarks from Saturday’s meeting in Texas; while a FarmPolicyNews transcript of the speech is available here.

Chairman Conaway stated, “Farm bill. We’re going to get that baby done. We’ve had a hundred plus, 110 hearings. We did 21 hearings on SNAP alone. Three years of good, hard work looking at what was working, what was not working, how was the ’14 Farm Bill being implemented, and we’re ready to go.

“Collin Peterson and I worked well together. He’s a good guy. He’s a friend. And on everything except SNAP I thought we had it going the right direction. He’s got all of his priorities in the bill, I’ve got mine in the bill, the non-SNAP target. And I thought we were working well together on SNAP. To get what we’ve done, as I said, we did 21 hearings over the three years.

Focused on policy. Previous attempts to reform SNAP had started with how much money we’re going to cut out of it, particularly in 2013, when we had that aborted attempt at a farm bill there, the idea was just cut money, cut spending, but go find a policy that does that. Well, nothing could be more wrongheaded than that. So instead we’ve spent the last three years looking at policy.

Chairman Conaway noted, “Folks in production agriculture, folks living under this disaster we’ve had from an economic standpoint in the last five years, a 50% drop in net farm income, the worst since the Depression, you deserve sound agricultural policy that you know what it’s going to be over the next five years. There is no reason for us not to get this done by September 30th. There’s no reason for extensions. There’s no reason for the drama associated with not getting our work done.” 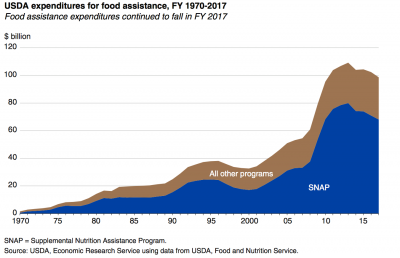 More specially on SNAP, Chairman Conaway indicated that, “With respect to the SNAP program, that was described by my colleagues across the aisle as ‘extreme partisan policies.’ Keep that in mind. So Peterson and I were working. He had the language on SNAP since February the 7th. He’s had the concepts that we were going to pursue since last October. And I assumed he was working with his members to socialize that within them. He didn’t. He simply told them that Conaway’s just doing what he did in ’13 and we don’t need to be a part of it.

“I spent most of March thinking we were negotiating in good faith, and then last week or the week before last his team sent him a letter saying—and I’ve never seen this happen before—but every Democrat on the House Ag Committee sent him a letter saying we don’t trust you to negotiate nutrition, so get off the field. And then last week he sent out a press release that said the House Democrats on the Agriculture Committee are no longer interested in working on the farm bill. They went to the sideline.

“Well, okay. I’m disappointed. Hurt, quite frankly, that they weren’t willing to be a part of the solution. But that does not mean we’re stopping.”

Those extreme partisan policies are this. We have a bridge or a gap between the unemployed in this country, and the skill set they currently have or don’t have, and all those new jobs that are going to be out there, and the skills that they need to get those jobs. We need a bridge between those. Well, we think SNAP can act as a good bridge.

“And so what we’re going to do is we’re going to plow a significant, unheard of amount of money into education training that will be based at the state. States will do it. It will be mandated that anybody 18 to retirement age who is not pregnant, who is not mentally or physically disabled and is not a caretaker for a child under six, that person can participate in the program if they want to. If they want to participate, then they’ll need to work for 20 hours a week, or they need to train, or they need to do an apprenticeship, or they need to do subsidized work, whatever it is that’s out there. We’ve got an array or list of things that are out there.”

.@RepFrankLucas notes @HouseAgNews Chair @ConawayTX11 is very focused on “real work requirements being added to food stamp [#SNAP] recipients…if you are physically able, you need to work…[and]…Democrats are pushing back intensely on that.” https://twitter.com/NewstalkKCLI/status/977233538629152768 …

“That’s the extreme partisan politics that the Democrats are worried about. That’s why they abandoned rural America. And that’s why, when you look at a map of red and blue, why all of our country, our flyover country is red and the rest of it is blue, because they don’t understand the value of work. A recent article in the Wall Street Journal said most farm families out there are working two and three jobs to keep it together. Those folks are not afraid of work. Everyone in this room is not afraid of work. There is dignity in work.” 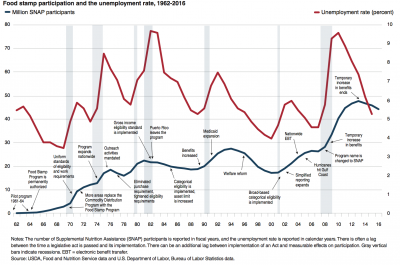 “And it couldn’t come at a better time. This economy is going to get better and better. There are going to be new jobs out there, new opportunities. And that’s what this SNAP program ought to be about. Yep, we’re going to feed you in the meantime, but we want to help you get a job and start moving up that ladder of success.

Those are the extreme partisan politics, partisan polices that drove my Democrat friends to the sideline. Shame on them.

Rep. Collin Peterson was a guest on Monday’s “Adams on Agriculture” radio program with Mike Adams.  An audio replay of their discussion is available here (MP3- 8:00 minutes), and a FarmPolicyNews transcript can be read here.

Mike Adams asked, “But Chairman Conaway is going to move forward with the farm bill. What’s your reaction to that and the chances of being able to get it done with this division still there?”

Rep. Peterson stated, “Well, he’s the chairman, and it’s his call. I don’t think it’s a good idea, and I’ve told him that. But it’s up to him. I think there’s no question he can get a bill out of committee, you know, with whatever he wants in it, probably. But how you’re going to get that bill across the floor is a mystery to me.

“Having talked to the leadership of the Freedom Caucus, who says even with what is being proposed being in the bill they’re still not going to be in favor of it. That’s about, according to them, about 30 of them. And I’ve talked to a number of moderates, and I think there’s 15 to 20 moderates that won’t vote [with] Republicans and won’t vote for this bill if the SNAP stuff is in there as it currently is. So if that’s true, that’s 50 people, and I don’t know how you pass a bill.

“And then on top of that, you know, Senator Roberts has said that they’re going to do a bipartisan bill. They’re not going near any of the SNAP stuff in the Senate. Senator Grassley came out last week and said that they’re only going to consider a bipartisan bill, so… And what’s in, you know, in our bill in the SNAP area is not being considered in the Senate at all. We had 23 hearings on SNAP and not one single thing that’s in this bill was actually called for in any of those 23 hearings, and stuff came out of the blue. And I know it’s stuff that’s wanted in the Republican caucus. I understand that. Some people. But I don’t know how you get this done.”

Mike Adams queried: “What’s in there that you especially oppose, that you do not like?”

Rep. Peterson stated, “Well, it’s not me. It’s not me. This is my members. And my members, you know, initially were upset because I was trying to actually protect the committee and the chairman by not letting this information out because I knew what the reaction was going to be, trying to see if we could soften it, which we weren’t able to do. And finally I had to let them know what the language was, what the score was, and that just made them all the more adamant that they weren’t going to support any bill that had this stuff in it.

“I don’t even know where to start on this, you know, Mike. The last time I talked to him he said, well, maybe we can drop those other things— LIHEAP, broad-based cat el and the child support, but we have to have work requirements. I told my members that. It didn’t make any difference. So, you know, it’s not something I can do. I can’t lead people that don’t want to be led—so we are where we are, you know.”